I couldn't resist getting some colourful Bashi-Bazouks for my Sudan project. Irregulars of the Ottoman armies, they could be found wherever there was the prospect of adventure and plunder.  As Sudan was a dependecy of Egypt, itself was a vassal state of the Ottoman Empire, I imagine there were plenty to be found there! They will bulk out the British and Egyptian forces and serve as irregulars and scouts. 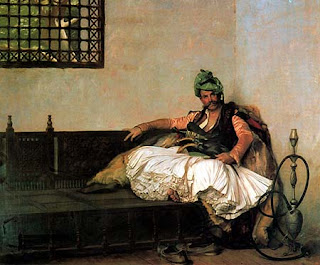 Despite my initial enthusiasm, I had a bit of a nightmare painting these, to the extend that I started over at one point. The sculpts have bags of character, but were really fiddly to paint, being festooned with pistols and daggers. Initially, I thought I'd have them as a riot of colour with no uniform at all. This was the result of the initial block colouring with no shading or highlights:

Awful awful awful. I'm afraid choosing colour schemes that aren't uniform just isn't my strong point and my choices of colours sometimes leave something to be desired. Going back to the drawing board, I searched the interwebs for inspiration/or ideas to pilfer. I came across this quite spectacularly dashing unit of Bashi-bazouk cavalry from lonelygamers.blogspot.co.uk:

I really liked these so settled on a similar colour scheme, adding the mustard headscarves and a few green sashes, while keeping them far less vibrant than my initial effort.
And this is how minecame out. If I get any command, their leader will definitely get a turquoise headscarf! 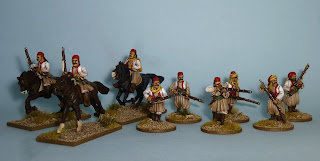 Something of an improvement, I hope you agree! I'm much happier with the balance of the colours being fairly uniform, but the outfits and poses less so. They were a bit crisp and neat in my style so I grubbied them up quite a lot, though the weathering powder I'm using doesn't seem to looks as good over white. The sculpts are Perry Miniatures, the foot ones have long-rifles (and were from my secret santa) and the mounted ones with carbines were a bargain I nabbed on eBay. 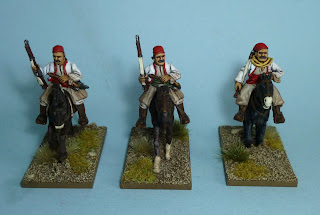 With that, I've finished the Sudan units I have so far, but oh look, it's Salute around the corner...

Update: someone on LAF asked for some close-ups so I obliged, thought I'd post them here too. 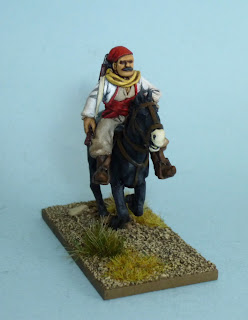 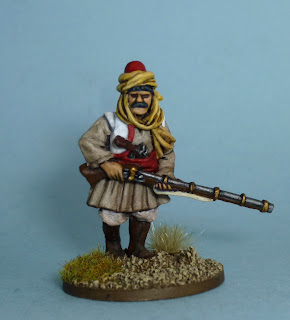 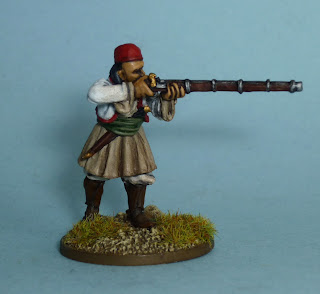