The third of my recent Pulp games was a showdown at the aptly-named Smuggler's Wood. The Adventuring party used information gained from the fleeing Mr Byrne to confront the O'Leary gang at the moment of the deal with the buyer of the missing artefacts.

The Professor sent his Daughter Victoria, with the Law in tow to confront the O'Learys, identify the buyer and retrieve the rest of the artefacts for the British Museum. Patrolling goons with wolfhounds stand in the way of the gang leaders, hiding in the back if their Talbot van. 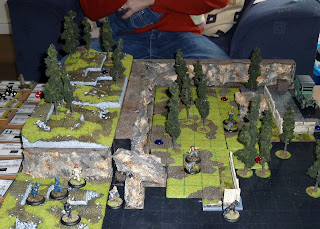 As a gunfight erupts across the wood, Mr Singh surveys the carnage. The Gang's getaway is hindered by the fact they left their fuel on the top of this cliff, to be found by Mr Singh. Sometimes, randomising encounters using an encounter deck can create odd events - we blamed he particularly idiotic mooks of the O'Leary gang! 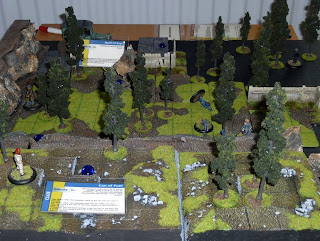 The conclusion of this adventure: the heroes don't come off well in the firefight, as Mr Singh falls, the remainder beat a hasty retreat.
The buyer remains a mystery, with only a handful of artefacts recovered and the O'Learys mostly having made an escape, our taskmaster Mr Chuffington is less than satisfied. 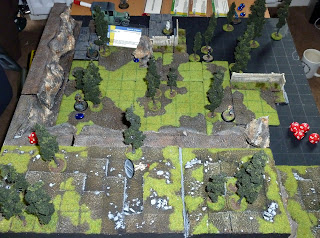 Next Adventure: India! (not for a few months, I've painting to do first)
Posted by Phyllion at 21:49 No comments: 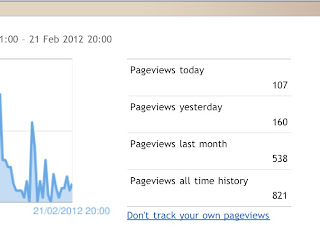 After almost a year of Blogging, my rambles seem to have gathered an audience! 60% of my page views have been over the past month, the majority of which in the last week or so I think.

Thanks to all for reading and commenting!

Posted by Phyllion at 21:01 No comments:

Email ThisBlogThis!Share to TwitterShare to FacebookShare to Pinterest
Labels: Blogs

Our second Pulp Adventure for February, the Professor and Mr Singh spot the shifty Mr Byrne fleeing the O'Leary gang Warehouse and give chase.

Setup: the Red gems denote six markers that Mr Byrne must collect to make his getaway. The Prof and crew need to pursue, spot and disable him ask in order to ask probing questions about the missing artefacts. 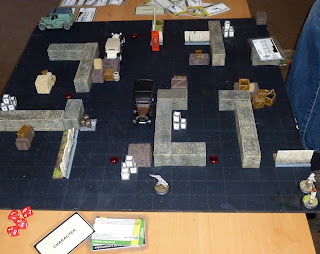 After a few turns: Mr Byrne disappears out of sight and leaving two trails to pursue. The Prof tries an alternate route to head him off while Mr Singh stays hot on his heels. The scenario required the heroes to collect the two trails of numbered markers in order or risk their quarry's escape! 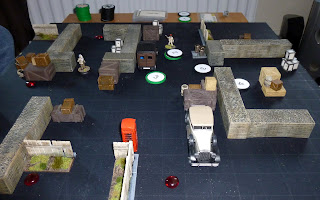 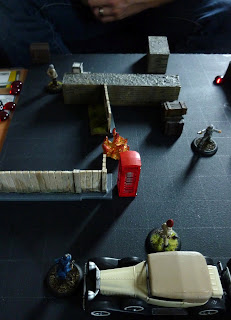 Byrne throws a firebomb (the cad!) forcing the Professor to find another route. Singh and a local friendly bobby continue the chase. But time is running out for our desperate fugitive! 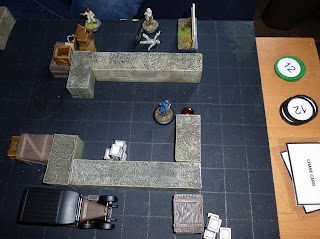 The finale: Byrne runs out of avenues and after a firefight he critically fumbles his defence roll, tripping over. Our heroes close in to ask some awkward questions.
Posted by Phyllion at 21:52 No comments:

Pulp Adventures AAR: Episode One 'Investigation at the Docks'

Got a good Pulp scenario played with my brother between the necessary feeds and changes of my 6-week old niece.

1930's London and Mr Chuffington, Director of Antiquities asked his old friend Professor Hemmingway to investigate the disappearance of artefacts en route to the British Museum. The Prof's investigations led to a warehouse in London's Docklands, guarded by particularly suspicious Irish goons... 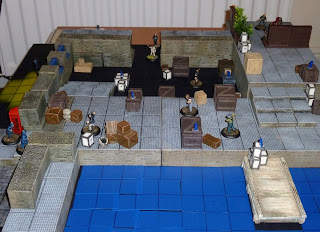 The Prof, with the stalwart Mr Singh and dependable butler Hawkins enter from the main warehouse entrance, while two of London's curiousest (and finest) Plod enter from a side door. The blue numbered markers (from Litko) represent encounters around the warehouse - people, events or perhaps the missing artefacts. 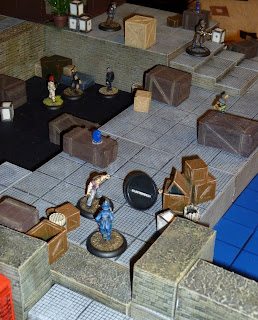 After a fistfight developed into a firefight, one copper falls, while the remaining one whittles down the Paddies with his revolver. Meanwhile, the Professor and Hawkins rummage through crates as Mr Singh clubs down the goon on the lower level.

Posted by Phyllion at 23:49 No comments: 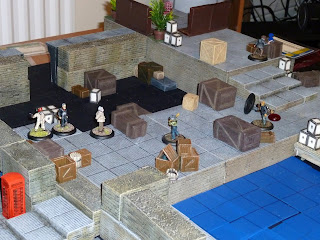 The Professor and crew investigate the upper level, while tommy gun-wielding o'Rourke, our 'head goon', dives (or slips) towards cover from the Professor's shooting. This being after o'Rourke emptied his gun, impressively missing everything in a Stormtrooper-esque manner. 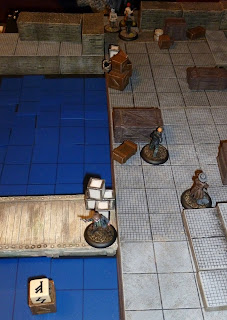 The conclusion - Professor and friends retreat, relatively unscathed with some examples of the missing artefacts as proof they were on the right trail. Meanwhile, the remaining artefacts are disposed of into the Thames by o'Rourke's goons. To be continued...
Rules were .45 Adventure V2. Miniatures painted by me and my brother. All terrain built by my brother - a scratch-built and fantastically modular set, built to fit 3cm x 3cm x 3cm dimensions. You can see more halfway down here. With the right 'set-dressing', these pieces can make any adventures spring to life.

So, I picked up this month's WS&S for some hobby reading on holiday. I had high hopes as at first glance it has a nice finish. But I must admit I was a little disappointed. Firstly, there were typos on many pages, including mis-naming an interviewee on either the introduction or throughout the interview text (Nick/Neil). Also, pretty much every shot of painted Napoleonic figures (adverts excepted) seemed to be Victrix miniatures - making the Napoleonic special seem a bit like a Victrix advert! Even to me, relatively new to Napoleonics there seems to be many amazing Napoleonics manufacturers just as worthy of showcasing. The miniatures reviews weren't particularly insightful and consistently positive and the introduction to Napoleonic gaming was incredibly brief. 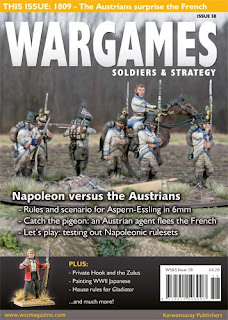 There were a good number of redeeming articles: I'll probably re-work 'catch the pigeon' for Peninsular Napoleonics, the Zulu skirmish game is inspiring (though I should be able to resist) and the front-page diorama is a great use of Victrix plastics - I almost wish I'd done grubby Napoleonics rather than my virtually-pristine Redcoats! I also enjoyed Rick Priestley's article, having an opportunity to regularly read the thoughts of such a long-time wargaming stalwart is great.

I accept many of the articles may not be written by native English speakers (it seems to be a Netherlands-published mag) but typos did rile me as almost all could be eliminated by a good proof-read. There was even a comment in one article about not being able to get away with typos, the irony!
So, probably not worth a subscription: I've yet to find a Wargames mag I want to buy every month.

EDIT: For clarity, I did enjoy much of the issue and would definitely consider buying WS&S again, especially if the theme appealed to eras I'm interested in gaming.

Also submitted another little entry to Curt. And with that, I'm off for a short holiday, take care bloggers!
Posted by Phyllion at 22:02 1 comment:

Email ThisBlogThis!Share to TwitterShare to FacebookShare to Pinterest
Labels: For Sale, Holidays

Shameless plug for an amusing blog

A personal friend of mine has recently started a new blog, pitched as a weekly British version of satirical newspaper 'The Onion'. I think it is really amusing, but he is keen on getting more readers!

So this is a shameless plug and do comment here or on his blog.

Check it out here:
http://swizonsunday.wordpress.com/

This weekend my Dad wanted to see an exhibition on illuminated manuscripts at the British Library. I was happy to indulge, but couldn't muster much enthusiasm in the subject. Turned out it was a nice surprise - a vast collection on both religious and non-religion texts, delightfully illustrated, from the Royal Collections held at the BL.

The works themselves were nothing without the context around them, which was succinctly presented and integrated into the displays. Plenty detail to the historical backdrop, mostly of the Was of the Roses and 100 Years War. Having studied Henry VIII at least twice in school history lessons, seeing the very Bible the King and Cardinal Wolsey pored over and annotated in their search for the justification for Henry to divorce his wife was pretty darned interesting, actually.

Most of the works were from between 1100-1500 and were real treasures. There were even a book of psalms from the Anglo-Saxon period, and the burned remnants of one work dating from around the year 500. I wonder if these artists realised their work would survive a thousand years later? Not bad for some cured hide, pigment and gold leaf.

Another fine example of just how much history the UK has to offer. Darn, I sound like a tourist-board advert. Highly recommended but I stress I have no affiliation with the BL!

I'd best bring this back to wargaming - the exhibition almost tempted me to grab some miniatures for Wars of the Roses/Medieval skirmish. Perry miniatures just happen to do a couple of boxes at a very reasonable price... Whilst I'd have fun painting them, I would never get a game with them, so I'll leave it as a project I could do as a diorama one day.

Bemoaning a lack of hobby time

The week has flown by. Real life in the way. Late home from work. Jobs to do about the house. Visiting family. I'm not sure which is to blame for my lack of productivity this week, perhaps a combination of them all. As as result, barely has a brush come across metal this week. We're approaching the halfway point of the challenge and I'm not quite at the hoped-for 250 mark.

Looking at my diary, I've got another hectic week this week, then just the weekend before flying off for a short break in Morocco, then a dash up to visit my brother and newborn niece. So I probably won't have much more finished before the end of February.

I did manage to snatch a couple of hours to paint today, finishing off a batch of Redcoats that have cluttered my hobby area since the summer. They won't score for the Challenge but it is nice to finally get them done.

On a more positive note, my last round of eBay auctions raised nearly £50, close to the as new value, so I've a good excuse for some hobby purchases again. And I've more earmarked to sell when I get chance to list them.

Anyway, in the meantime here is the last entry to the Challenge, which feels like it was an age ago. Baboons and a French Mademoiselle, this was a curious combination! 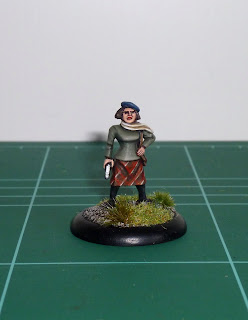 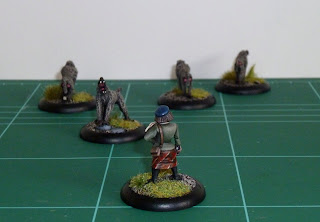 Email ThisBlogThis!Share to TwitterShare to FacebookShare to Pinterest
Labels: About me, For Sale, Pulp
Newer Posts Older Posts Home
Subscribe to: Posts (Atom)