Last weekend brought the Lardest Day in the Wyvern Wargamers calendar: where like-minded gamers travel from far and wide to indulge in a day of all things Too Fat Lardies. We're honoured to have the presence of Rich Clarke himself and other Lardy luminaries such as the esteemed Sidney Roundwood for our day's gaming.

And wow, what games were available. With two sessions everyone got chance to play some real cracking setups from a whole range of eras and Lardy rulesets: Dark Ages to modern day. The village hall was packed out with 10 games and nearly 40 gamers. 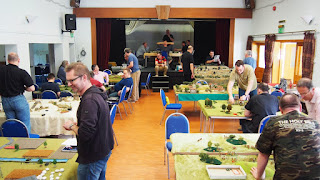 Once again Ade of Bullets, Bandages and Lard did a sterling job of organising the day, as well as putting on an amazing Sari Bair-Gallipoli game using Big Chain of Command. Ade used a clever sharply sloped setup to represent the Anzac assault on the Turkish positions on the crest of the ridge, which looked outstanding but was a pain to capture in photos. I gather from the roars across the room that both games were particularly tense. 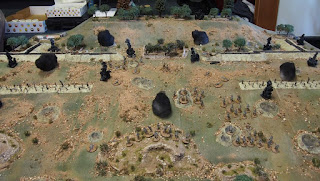 Looking up at the ridge, a daunting assault 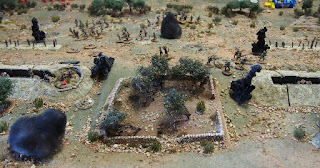 And looking down from the Turkish trenches

We had Rich Clarke running his upcoming Fighting Season game, with modern British in Afghanistan 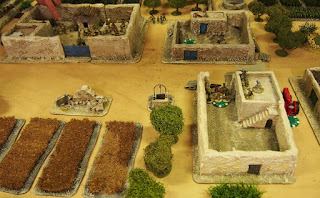 Returning from last year, a gorgeous Peninsular Napoleonic game of Sharp Practice by Jim. The buildings are Grand Manner and the boards are re-painted and flocked GW terrain tiles. 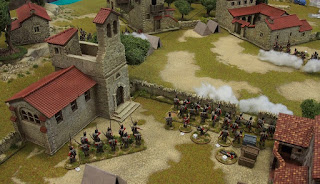 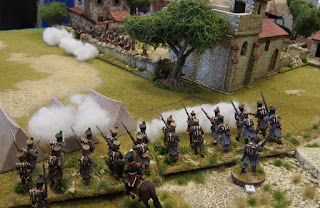 We had some 'Cold War Gone Hot' with West Germans looking to blunt a Soviet armoured assault. Fine looking terrain on this one, lots of neat details like the hot tub and washing line, and a large Aldi (of course!) 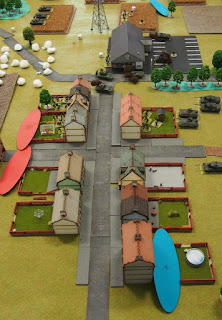 Wyvern's own Stu put on a lovely looking Russo-Japanese game based on the battle of Shaho, 1904. Stu did a cracking job of the new terrain tiles and pieces to really evoke the era and his growing collection looks excellent on the tabletop. 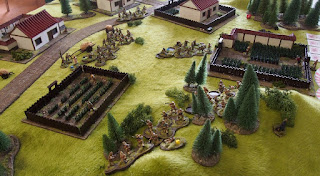 On the next table over, Wyvern Paul had Sharp Practice in the Wars of the Roses with his new collection - what a great ruleset that can cover such an expanse with just a little tinkering here and there! 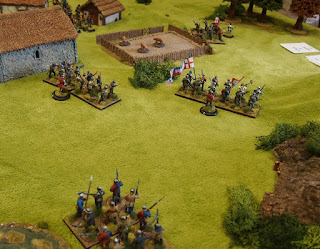 Last but not least (for this post anyway, was this great looking game of Big Chain of Command - a really great job done here of pimping the 4Ground buildings with gardens and allotments (I've been building a few of these this week, and will thieve these ideas unashamedly). This game run by Jason and Nathan. 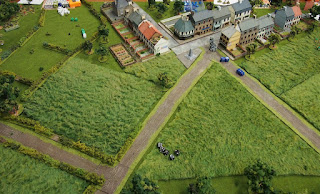 That's all the games that I photographed (my own excepted - for a future post). I know Wyvern Chris was running Dux Britannarium and I think there was a game of IABSM too, apologies to those that I missed. But one more thing must be remarked upon: the continuing tradition of Lard-themed 'tiffin' on offer 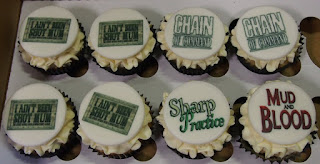 What other event offers you branded cupcakes for all your rulesets of choice?! I can sense your envy from here.

All in all, a corker of a day in fine company, rounded out by a few beers in Evesham's finest (?) drinking establishment and curry house. Roll on OML4 in summer 2016!
Posted by Phyllion at 20:10 6 comments: