Santa has sided with the Mahdi... 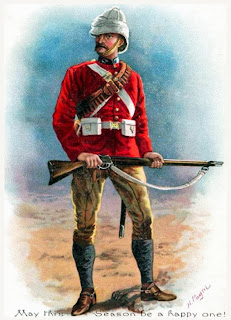 ...this year, with my Secret Santa delivering Muhammad Ahmad bin Abd Allah himself, the infamous guerrilla commander Osman Digna and more Ansar 'Jihadiyya' rifles to add to the painting queue. 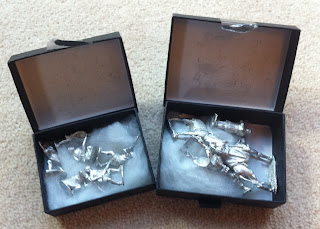 An excellent choice, thanks Santa! And thanks again to Cath and Ian for organising us.

Wishing my fellow bloggers a very Merry Christmas filled with good humour and just the right amount of over-indulgence. I look forward to seeing everyone's finest work over 2014.
Posted by Phyllion at 16:36 9 comments:

Email ThisBlogThis!Share to TwitterShare to FacebookShare to Pinterest
Labels: Secret Santa, Thanks

Slightly belatedly, this is what my 'Challenge box' looks like after what seemed like an eternity of prep work. I had to raid last years challenge leftovers to make it up to the ambitious target I set myself: 700 points. If I get all of this done I'll be very chuffed, though doubtless I'll get diverted by something new mid-way through (including my Secret Santa, no doubt...) 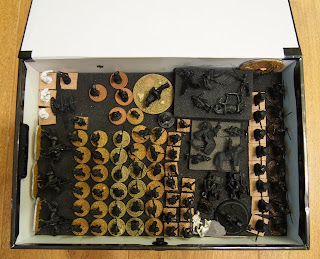 Some pointers to what will be coming:
-unsurprisingly, 'quite a bit' of Sudan, both Mahdist and British
-my Bloggers for Charity offering
-a last, long neglected unit of Bondi for my Saga Vikings
-some Portuguese Cacadores for Sharpe Practice
-many odds and sods, of course

I did fail miserably at clearing the half finished bits from the queue, annoying as that included a whole unit of Egyptian infantry. They've been moved to another box to be contemplated either after the challenge of after I've hit the big 700!

Oh, nearly forgot the overflow tray of 15mm US Paras: 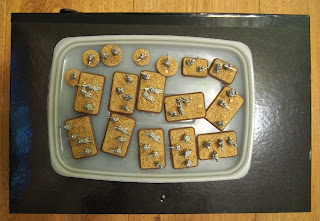 Right, that's reminded me how much I've got to do, I must get back to the painting table
Posted by Phyllion at 21:40 18 comments:

Having moved into a larger property a few months ago, it was past time to sort myself a decent hobby space. For years I've used the knackered Ikea dining table, setting up and packing away for each mealtime. While it meant I could watch/listen to TV and be with the wife at the same time, the recent delivery of a sizeable solid oak dining set had me search for a new location. Te new able is infinitely better for dining and entertaining, but it would be perilous for me to scratch or paint mark it.

I was originally allocated the loft. Seemed reasonable until I actually went in there in winter: its bracing, seemingly having been converted before silly ideas like insulation. Negotiations started over - where could I fit a long-term hobby space, without affecting our plans for the upstairs rooms? The second bedroom was the most credible, being quite large and with an odd space under the stairs to the loft.

The price of the wife's consent was acceptably low - I was welcome to a permanent hobby space there if I provided my assurances that I'd tidy projects away when we have guests staying so they can use the desk as a dressing table.

Deal. Off to Ikea we went. We unexpectedly returned with this corner desk, which barely fit into our car. But it fits perfectly in the space and gives a very good sized surface, as well as some pigeonhole storage for paint and current projects. I'll probably add some shelves above it for more storage. Truly large and temporary projects (terrain, probably) can still be done on the spare dining table, which has been relegated to the Baltic loft. 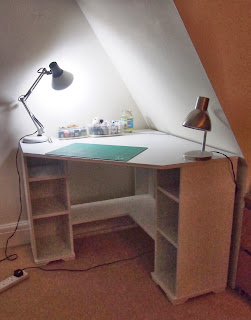 To be honest, I don't particularly like the look of it, it has an annoyingly structural shelf below so I can't fully stretch my legs out and white would have been the last colour I'd have chosen. Care to guess how many colours it comes in? Yes, one: white. But hey, it was cheap and should do the job admirably. 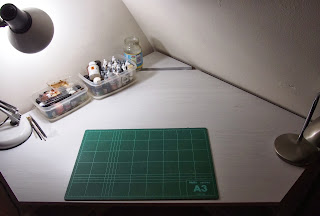 While in Ikea I had a bit of a moment at the storage boxes, coming back with somewhat more than the mere 6 I intended to buy. But this should allow me to rationalise the numerous cardboard boxes of terrain and supplies as well as the lead pile and store it all neatly in the loft. Win (or, I gained myself a massive job to do one coming weekend) 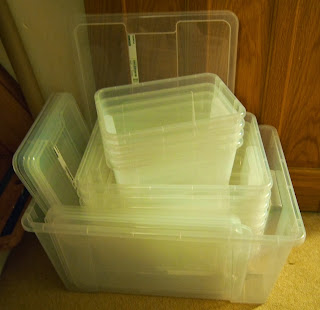 Of course, I also joined many of the challengers in the tradition of buying new brushes for the start of the challenge. This time I'm trying the Rosemary & Co Series 98 with triangular handles. Once again, delivered within 2 days, great service. 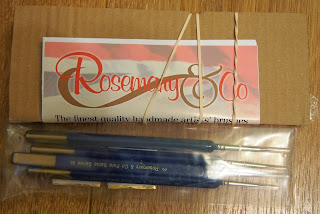 Tomorrow, I look forward to christening my new paint station.
Posted by Phyllion at 22:26 12 comments:

This weekend Gharak and I got together to try out the popular new ruleset 'Chain of Command' by Two Fat Lardies. We dug out my fairly extensive collection of 10mm WWII British to face his Germans. Rolling out a 2' x 4' mat on the dining table and playing in centimetres gave us well over the recommended board size, though terrain was a little scant.

First Game
We rolled 'Attack and Defend' with Gharak attacking with 10 support points. I got half that - eek! 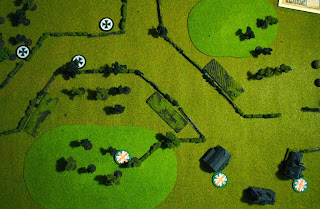 The Jump Off Points

After the Patrol phase, Gharak seemed to be set up to attack one flank, with me occupying the village and hilltop we dubbed 'Hill 42'. Gharak's infantry quickly filled the hedges and woods around his jump off points, covering the hilltop with a worrying number of MG42s.

With the tree line quite exposed, I take to laying down smoke with my 2" mortar... 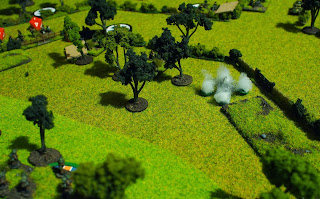 ...to no avail, as my lead Section is cut to ribbons by the combined firepower of two full German sections, with the survivors thrown back in disarray. 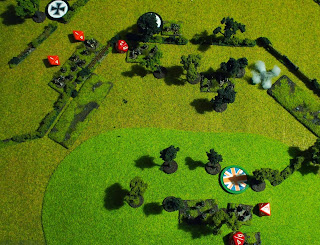 German armour arrives! My support was a Staghound MkII armoured car, which though fast and packing a fair punch against infantry, was well outmatched by the Panzer IV. 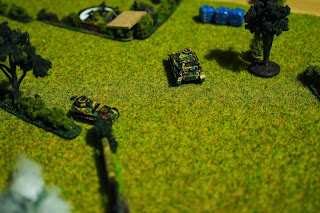 The first German assault on the hill ends badly, shot down as they reached the tree line by the sheltering Brits, who spent a Chain of Command action to withdraw out of sight. 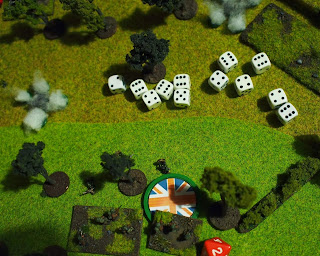 The Staghound takes a battering and while not destroyed outright, the Panzer's fire eventually forces its crew to bail out. Not ideal, though its tenacity stopped the Panzer from joining the attack on Hill 42. 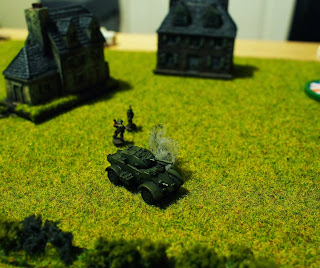 A second wave of German infantry soon followed up the hill and an ill-judged counter assault by my Brits brought my morale to zero and game over. We found Close combat to be brutal on the attacker, best reserved for sweeping up pinned and routed units.

Second Game
We also got a second game in the following evening, Brits probing German lines. Gharak played very aggressively, seizing the table centre with sections split. Fearful of the MGs, I played cautiously, keeping more in reserve and used the lee of hills and woods to avoid any crossfires. Eventually, an assault down the far left flank and deploying a second section to threaten the same on the right forced Gharak to give chase to head then off, while I used a double-6 double turn to deploy from reserve and open up with my Vickers team on an exposed team. With his morale dangerously low, Gharak conceded he couldn't prevent me from reaching my objective on one or the other flank. One game each!

Closing thoughts
In Gharak's words: 'this was the ruleset we were looking for when we bought the 10mm WWII'. We last tried 'Baptism of Fire' second edition, which was fun and had a solid core but the rules were sometimes felt vaguely written meaning we spent lots of time conslting the book and trying to decide what the most suitable result would be. Both games feel quite realistic, but CoC is more streamlined and the rules are much easier to understand and remember. The CoC PDF is well worth getting as it is well-seeded with hyperlinks to relevant sections (I got the hardcopy rulebook too).

Chain of Command didn't suffer at all from being played in smaller scale and multi-based units made it easier to handle, if anything making deciding which units could see easier. Also, being able to throw a flocked mat down over the dining table after dinner was very convenient.
We found the two forces played slightly differently, Gharak splitting his sections into teams more often while ai kept mine together  and focused to focus firepower and avoid crossfires from MGs.
We had a quick tester before this game to thrash out the game concepts, which was worthwhile as

CoC introduces a few new mechanisms. I particularly like the pre-game Patrol Phase and slightly random activations, which simulate the fog of war without being too restrictive and force you to adapt your plan as evens unfold. We didn't find the Chain of Command points to be particularly powerful. Yet the core of the fighting are quite simple which is ideal for us playing infrequently, the similarities to Sharpe Practice are an advantage too!

All in all a very worthy addition to the rules stable, and one I think we'll play semi-regularly. I look forward to getting a few more games in - I'm eyeing up a small platoon in 15mm so I can grow down a few games at Wyvern Wargamers.
Posted by Phyllion at 17:38 9 comments: