After a slow start, the summer painting has picked up again, though the stuffy heat plays havoc with e paint. As you may recall, I'm trying to finish off a few bits and pieces to round out each force and top of the list was a third command base for the British. I've got a late September date pencilled in to put on some Sudan games, probably with a trial run in August. Time to get everything finished up in one final push. 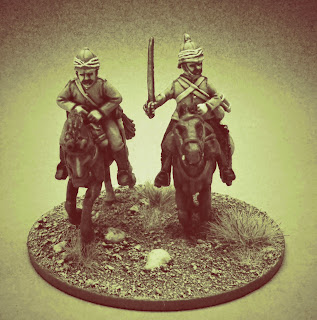 This galloping officer didn't to seem to suit being an infantry commander (unless he's leading his men away from the Mahdist charge...). So he's going to head up my cavalry brigade, being accompanied by a trooper of the 10th Hussars. 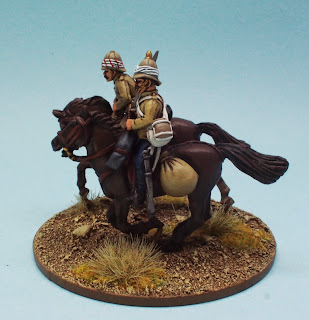 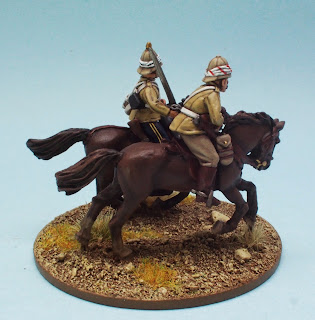 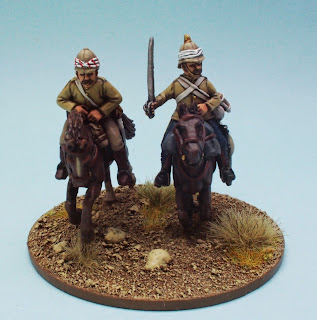 It's clearly been an equine month (have I mentioned that I dislike painting horses?!) as I also painted a horse holder stand for my mounted infantry in the Sudan. 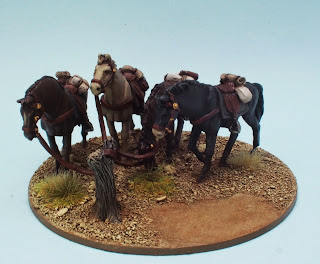 I'm not aware of a manufacturers that makes Sudan British horse holders, only camel holders, but mounted infantry were used. These are actually ECW horses from Warlord games, but I couldn't see anything particularly anachronistic on the baggage. The gap on the base is for a guard - turns out I don't have the mini that I was going to use, so I suppose a small Perry order will be going in fairly soon. Because I don't quite have the whole range...yet! 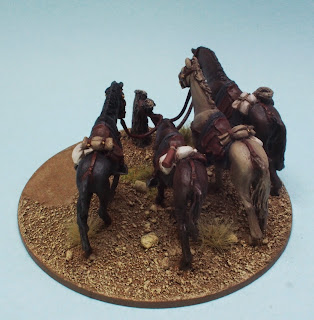 And finally, another piece of flavour terrain or Pulpy plot point - a small camp. They are from the Perry miniatures / Renedra tent sets. 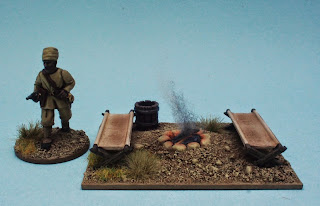 The smoking fire came out pretty well
Posted by Phyllion at 20:44 12 comments:

I recently wrote up how I do my basing, but I've also been working away on some customs sabot trays. I've previously just bought Warbases sabot trays to vase my uhits up , as they are well priced and do the job perfectly well. But they don't do any 'mob trays' of a standard, square size. No doubt hey could do me some custom me ones, but inspired by a Captain Blood's fine work over on LAF, I thought I could make my own up.

Despite following such a tough act , I think mine came out rather well: 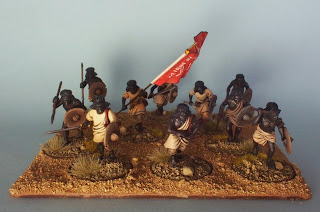 To save me cutting the core bases, I turned back to Warbases and the largest size of their round cornered bases. For the holes, I turned to Jimbibbly of LAF (fine proprietor of Oshiro Modelterrain). He was only too happy to cut me some custom Perspex holes. Until I told him I wanted 120. But like a trooper, he delivered me these: 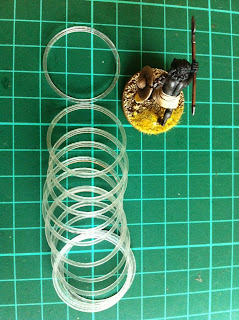 Then a flash of inspiration - My Mahdists are all bases on 2ps, many* of which are magnetic. With great foresight, I had also pilfered the spare 'save the date' fridge magnets that we sent out for my wedding last year. Magnetised trays it would be! 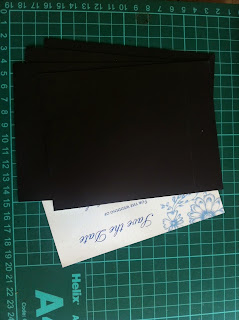 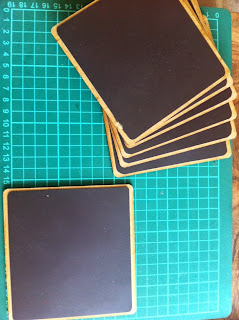 Then just superglue the Perspex rings on: 10 to a base in as random a formation as I could make with the space. The white bits are off cuts of card, just to make the filler less thick on larger areas. 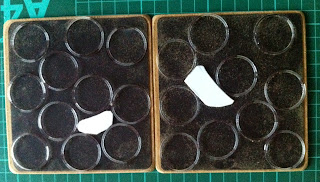 After that I just followed the same process as for basing my troops, starting with wood filler to smooth it all out. 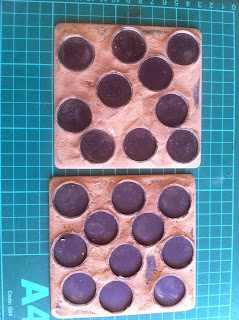 Then slather with pva and sprinkle sand, allow to dry and repeat. To avoid the warping the thinner wooden bases warping as the pva dries, I clipped two back to back while drying - theory being the force on each should be pretty much the same so neither should wrap significantly. It seems to work (at other times I use the 'pile of books on too' technique - usually the wife's cookbooks!) 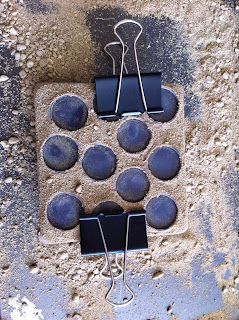 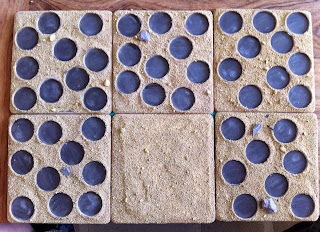 The first batch of nine after a good coating of scenic cement. 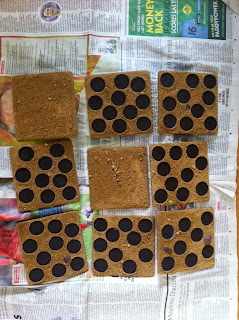 I'll explain the blank ones later.

I've still got to paint them up, but I've run out of may 'terraining' emulsion colour of choice. They are perfectly useable for now. 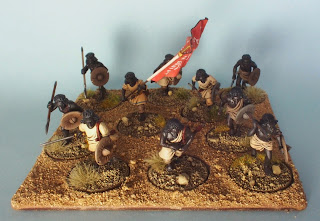 All told, these took no longer than the work I already did on improving the standard Warbases sabots trays - sanding off the harsh edges, pva and sand, paint them up and flock/tuft. They are to my own specification, look a little less obtrusive being just a single layer of mdf and are magnetised to boot! Not a bad for few evenings of work over the World Cup, if I do say so myself.

*only 2 pence pieces from the early 90s onwards are magnetic. It turns out a fair of my Mahdists are actually based on older ones - ah well!
Posted by Phyllion at 11:43 7 comments:

Now for Something a Little Different: 15mm WWII

Are you sick of deserts yet? Yes, a brief interlude to normal service here as I've spent the last couple of weeks ploughing through a WWII platoon for Chain of Command.

I settled on US paras, finding a Flames of War box of Greatcoated paras at a ridiculous price on eBay - something like £8 with postage.

They were prepped months ago in time for the challenge last winter but the sat, undercoated and based on my painting table for months.  I undercoated them Army Painter Leather brown, serving as the colour of the greatcoats, intending to pick out details in the appropriate colour then given them a good wash of strong tone ink and a few highlights. Every so often I'd pick them up and start to pick out the details, but with 15mm being an unfamiliar scale I too often found that I'd just shove them away with barely any progress and return to the mound of  28mm minis. But I've had so much fun playing Chain of Command up at Wyvern Wargamers that i was gripped by the enthusiasm of pushing through and getting them finished.

This is the core US Parachute infantry platoon, assembled according to the CoC list: 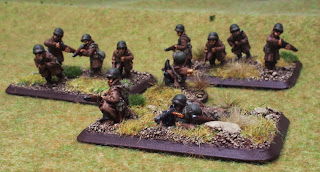 The platoon comes well supported with a 60mm mortar squad and a bazooka team.

They are Elite, with 6 Command dice and are Aggressive troops - both very handy. They lack numbers though with just two squads (albeit of a fair size at 12 men), so will need to be carefully used. For elite troops, their platoon rating (which will help determine what support elements are available to an opponent) is surprisingly low at +1.

Naturally, having a selection of support elements will come in handy. With a few small add-on purchases I've added two sniper teams, a Forward Observer and a third squad, this time of regular infantry with a BAR. This gives me a fair choice from lists three and four.

I think the third squad may be the basic 'go to' option as bulking out the platoon will come in very handy to have enough troops to seize and hold objectives. 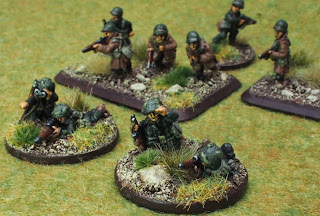 And finally, armoured support. I settled on an M8 Greyhound armoured car. I had a lot of fun painting it, inspired by a recent trip to Bovington Tank Museum (where I took a few too many photos of tanks). I'm unfamiliar with painting vehicles, but enjoyed trying some weathering with sponge, powders and a gooey mud-paste, though that doesn't come out so well in these photos. 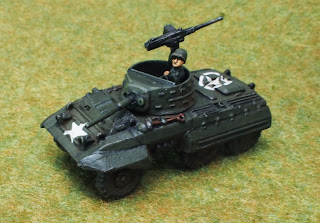 The markings are water slide transfers, I've not used these for years but found some appropriately sized ones that I think were meant for a 1:72 scale half track. 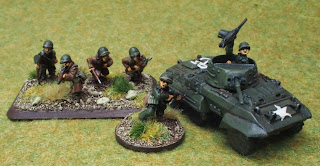 This is perhaps a first for me - an entire project done in one fell swoop! Here's hoping I can get them on to the table soon. With one project finished, might this open up enough space in the painting queue for another...?
Posted by Phyllion at 09:43 9 comments: