Finishing up Before the Challenge, pt.2

More accurately, finishing up during the challenge.
Aye, more Spanish Civil War to show you, that I didn't quite manage to finish for the Wyvern all-day game, but worked on slowly this month. With two sections pretty much done, I'm working on support options at the moment and this Army Hotchkiss machine gun team should do the job nicely. From Empress, fine sculpts with a head swap to give both helmets, if a bit fiddly to assemble the gun. 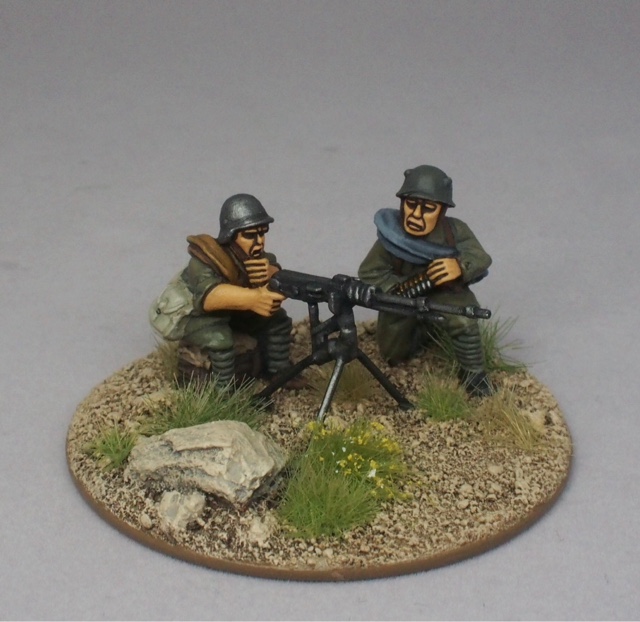 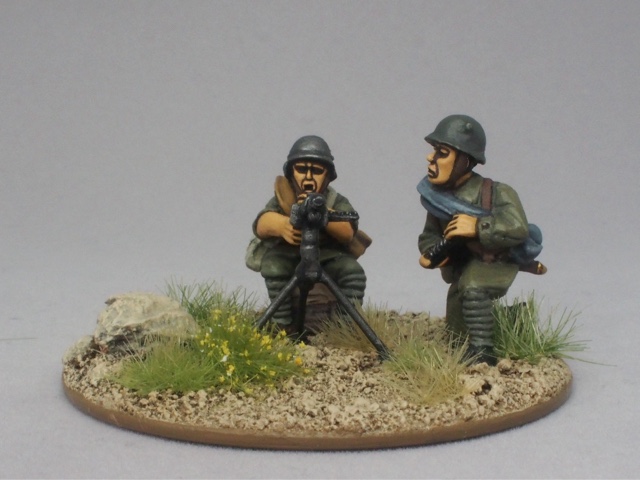 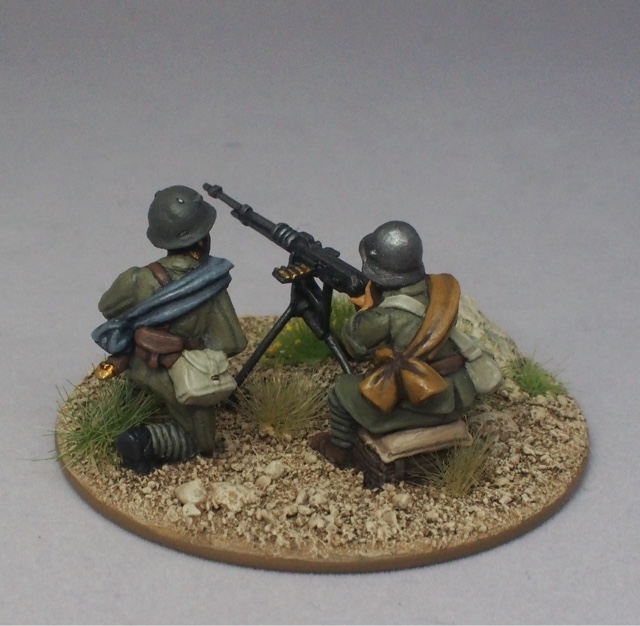 Also this Bilbao armoured car to support my Carabineros. A fine resin model, also from Empress miniatures. This featured in the all-dayer, though true to form for freshly painted miniatures, didn't really achieve much.
As Gharak pointed out, it did need some weathering. I think I got a bit carried away. This served as a test piece for a pot of pigment fixer from Vallejo that I picked up. Previously, I was happy with the subtle effects that I could get, but unfortunately they were rubbed or blown off when dullcoting. The fixer seems to work well at what it should do, but instead I struggled to get the same subtlety of effect with it: it tended to clump where the fixer was placed. I think I need a lot more practice, and looking back at the result, it does need a bit of tidying up and re-application.
Finally and belatedly, a shot of this year's box of miniatures prepared for the painting challenge: 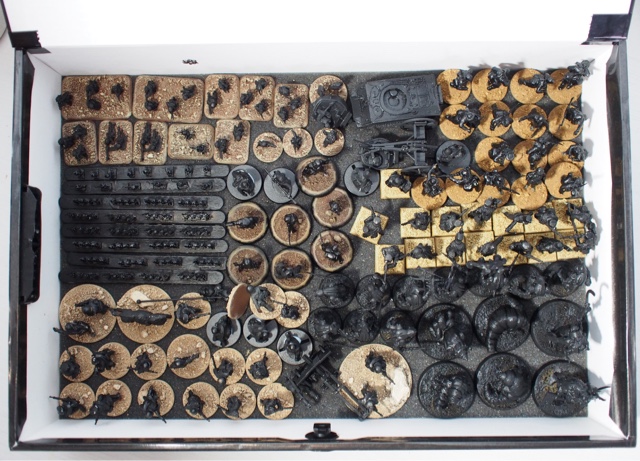 A whole range of stuff to get me to my modest target of 300 points: plenty of SCW, a bit of Sudan, some Pulp single miniatures, 15mm WWII Germans leftover from last year's challenge, 28mm Napoleonic Cacadores that have featured in at least three (!) previous challenge boxes (and still not even started!) and a couple of surprise entries.
Now, what to paint next?
Posted by Phyllion at 18:04 5 comments:

Merry Christmas to all.

Dearly wishing a very Merry Christmas to friends, bloggers, followers and all your kin. I hope you all have a happy and contented festive season. 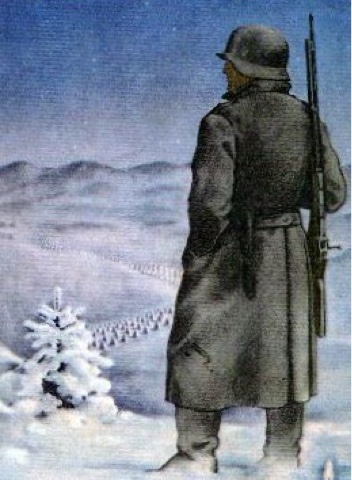 Thank you to my blogging Secret Santa, who generously chose me a selection of nefarious armed cultists from Artizan Designs. Very useful antagonists for Pulp adventurers, including one toting a flamethrower! Now, to do them as a Lovecraftian cult or the classic Pulp purple robed style?
And thanks once again to Ian and Cath for organising the event, which never fails to give a cheerful surprise on Christmas morning.
Posted by Phyllion at 13:09 16 comments:

Email ThisBlogThis!Share to TwitterShare to FacebookShare to Pinterest
Labels: Secret Santa, Thanks

Finishing up Before the Challenge pt.1

As the start to the Analogue Hobbies painting challenge approaches, I join many of my fellow challengers in clearing half-finished projects off the hobby desk. So a motley collection of minis to update you with. Like this 50mm mortar team to support my Requetes: 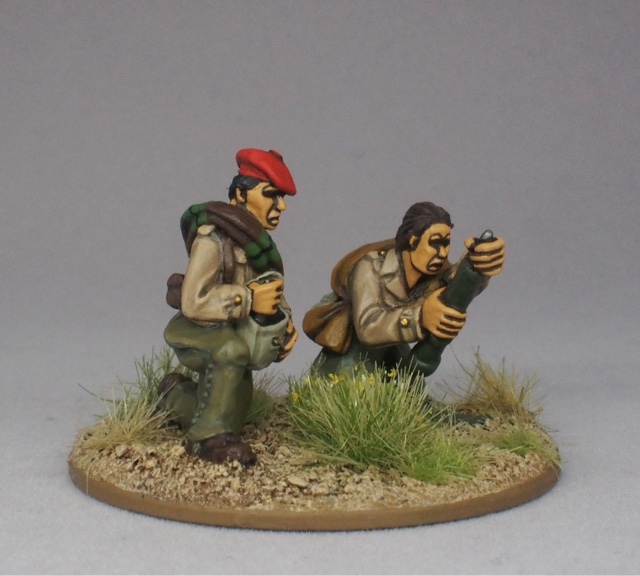 Empress miniatures as usual, and one has a head swap for a jaunty red beret. 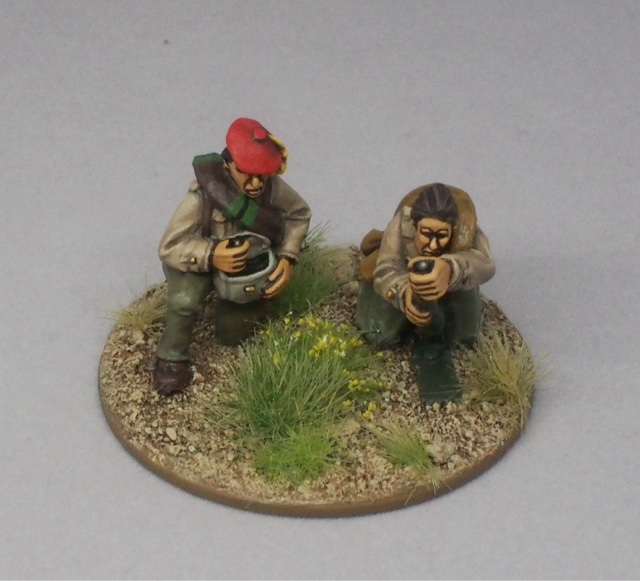 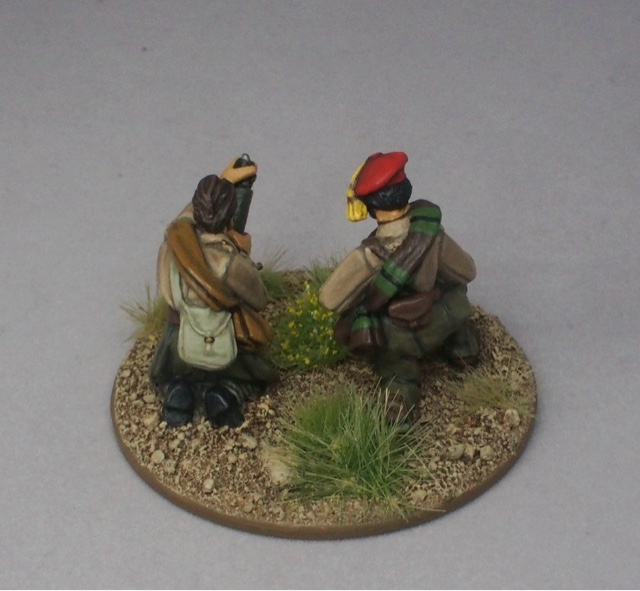 One of the great things about the SCW is the fine collection of flags on offer. I felt my Carabineros should declare their allegiance, another head swap for the full effect: 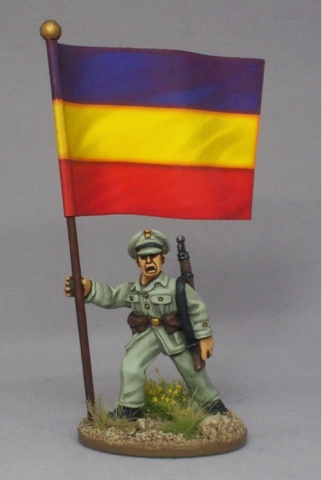 The flag is from the excellent and very reasonably priced Flags of War range of flag sheets. I rather dislike flagging, hence why I've recently used Flag Dude's pre-assembled offerings. I completely naffed up the first attempt at this one, ruining my preferred Republican. And I even made a couple of errors  on this second attempt, but managed to recover it. (Damn flag is upside down, will fix it in due course - thanks for pointing out). 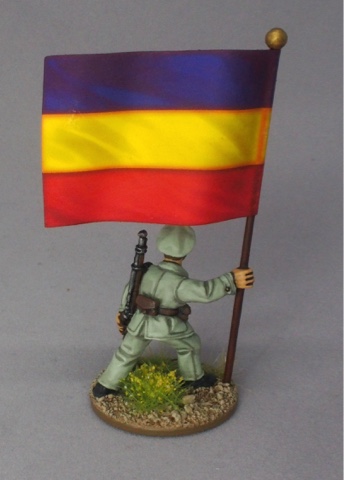 And I found a half-finished Sudan casualty marker in the painting box, so finished tidying him up: 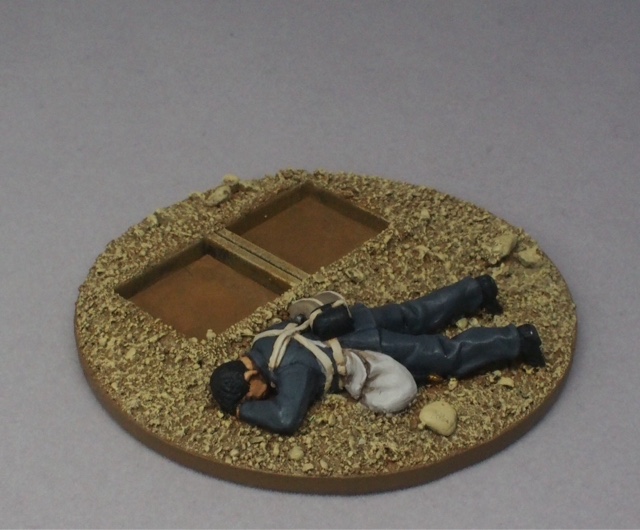 Im looking forward to the challenge start next week, but will ideally find a bit more time, and drive if I'm to put in a good showing in my three (!) side-challenges. Best of luck to my 85 fellow challengers!

Last weekend Wyvern Wargamers held the annual winter all-day club. Three of us, plus my visiting brother Gharak got all of our toys it to play a game of big Chain of Command Espana. We played the Battle of Seseña October 1936, an excellent scenario kindly posted by Gaming with TooFatLardies.


Following the fall of Toledo to the hands of the Nationalists forces in late September 1936, Madrid became now the next objective of Franco’s Army of Africa columns. These approached the capital city almost unmolested, as the morale of the Republicans crumbled and by late October they were to less than 100 km away.

After the arrival of Soviet tanks and advisors,  a short period of training and concentration, the first Republican tank unit was operational and the Soviet advisors  pressed the Republican Government to put it into action sooner rather than later as the risks of Madrid falling to the enemy were evident.
A decision was taken and the objective was to cut the road connecting Madrid and Toledo with a main attack in the South through the Seseña-Esquivias-Illescas  axis, supported by a secondary action in the north aiming to pierce the front at Griñón. A spearhead of 15 T-26 tanks made for Seseña on the morning of 29 October.

Ian and Matt took two platoons of infantry to represent Lister and Burillo's Republican columns, equipped with light support weapons and a mighty three T-26s for their assault. Defending Nationalists comprised of a platoon of Moroccans (kindly lent by Wyvern Stu, cheers!) garrisoning Seseña and Gharak's Civil Guard in Esquivias. If we were lucky, a column of Armoured cars might turn up too! (standing in for the Italian tankettes present on the day).

As on the day, the scenario had the T-26s charging forwards into Seseña and on towards Esquivias. 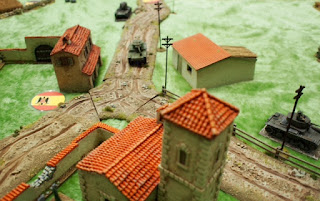 The experienced Moroccans, caught by surprise, seek what cover they can. 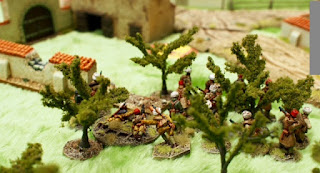 But where are those T-26s heading now? They scatter for cover in the face of a single antitank gun. 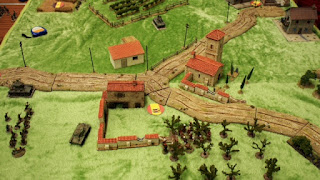 Emboldened by the armoured thrust, Republican infantry slowly make their way forward, but come under fire. 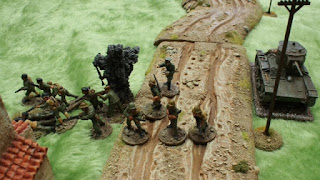 Meanwhile Gharak's Civil Guard emerge quickly from their garrison and into the countryside to  face Ian's infantry. 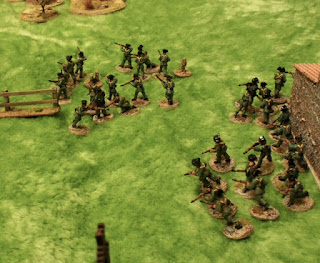 A brave (or, foolhardy) Moroccan tank hunter team makes a dash for an unsupported T-26. Amazingly, their grenades and molotovs cause the crew to panic and bail out! What isn't pictured is the first team, that tried the same, failed to make the dash and were cut down in moments. 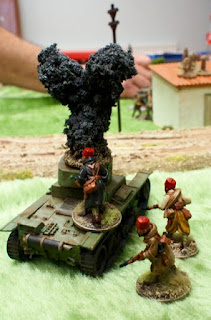 From the Republican side  - good progress on the left, where a bloody me lee has cleared Gharak's paramilitaries but stubborn resistance continues from my Moroccans. 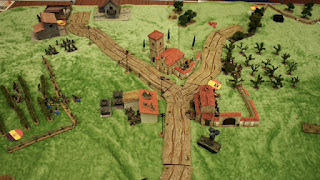 Lunchtime brings stalemate and the end of our first game. The Republican forces hadn't managed to capitalise on their surprise and take Esquivias but keep a foothold in Seseña. The Moroccans are battered but remain an effective force, but of course two of those T-26s remain in a commanding position. Honours even, but a strategic Nationalist victory. 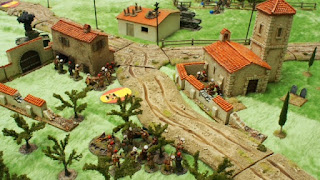 After a break for lunch, we set up a second scenario to continue the Republican push, moving the battlefield westwards and each side bringing up reserves. We ran a patrol phase and the attack and defend scenario. 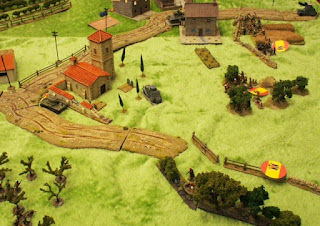 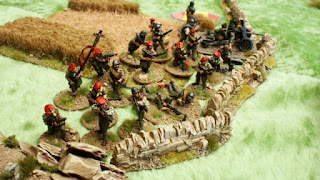 Once again, the experience of the Army of Africa is telling, having fallen back from Seseña, they quickly take up defensive positions outside the town... 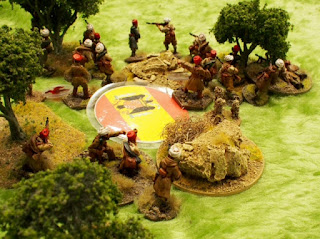 ...and lay down a heavy fire with their light machineguns. And the Natuonalist airforce is scrambled to provide close fire support. 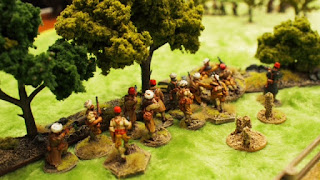 Game two saw Matt and I's infantry grinding away at each other from range, my Moroccons having the edge, but  three wounded leaders bruising their morale.

Meanwhile on the Republican left, Ian Column, better supported by armour that we were unable to draw a bead on and neutralise, managed to maintain up relentless pressure, eventually shattering Gharak's platoon. Game two, a clear Republican victory, but at quite a cost.

All in all a great scenario for the day. Taking the Nationalists, I expected a battering from all that armour and us to be able to do little to mitigate them. But I had Moroccan firepower, six command dice and a sprinkling of luck in my favour. Gharak's platoon suffered the worse, but I gather he enjoyed a day back at the historical gaming.

There were three other fine looking tables taking advantage of a wet Sunday afternoon, a massive 14' AWI game using Carl's huge collection. This was still going on when we'd packed up and left but looked like a close game. 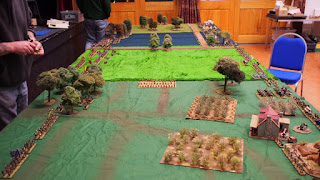 A smaller game of Sharpe Practice, hosted by the esteemed Rich Clarke himself, using a work in progress second edition of the rules. 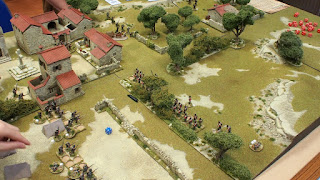 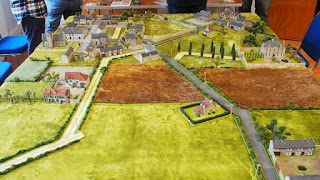