A dabble in Force on Force: AAR and first impressions

The other weekend, Samulus and I also managed to grab a game of Force on Force, with Samulus providing the rules and miniatures. We played a small scenario, three modern Russian fireteams against two of US Marines. It was a rescue mission, with one Marine fireteam pinned down and the second coming to its rescue.

Setup, the marines are pinned in cover between two Russian fireteams. In the background, Samulus wrestles with the rulebook. 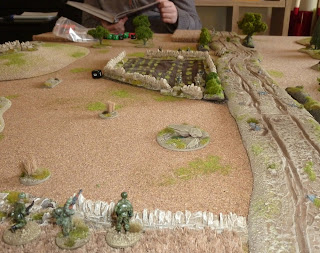 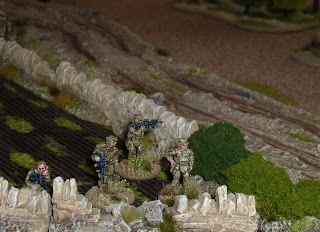 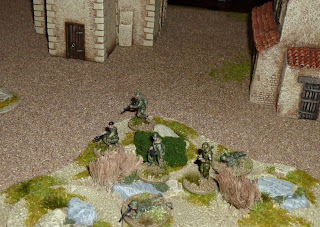 FoF uses different dice, (D6 through D12) to represent the varying levels of combat ability of different troops (though ours were all D8), with once dice of firepower per model and bonuses for support weapons. This is done as an opposed roll with 'dice matching' to determine the number of hits. Curiously, Pulp Alley which I've also been playing recently also uses similar dice for quality and opposed rolls system. Cover and body armour generate extra defence dice. It also has models be knocked down and still contribute to firepower/defence, with the results of the damage determined at the start of the next turn.

The first few turns had our Marines taking a lot of heat, but spectacularly passing many of their recovery rolls, much to Samulus' frustration. But eventually, weight of fire means one is killed and the other three sustain light wounds. 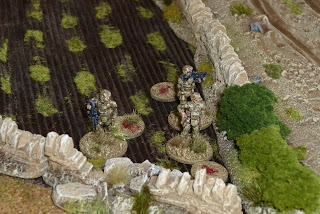 After, the second US fireteam  (top) comes to the rescue of the beleaguered Marines, some solid fire putting heavy damage on one, then a second Russian squad. This forced the Russians to retreat, allowing the US to medevac their casualties. 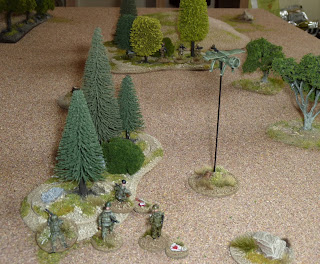 My thoughts on Force on Force? First impression is that it is a serviceable ruleset, once we'd realised we were playing the initiative rules wrong. It encourages defensive play, with the cover bonus being invaluable so you tend to hunker down in cover. This felt accurate, but didn't make for a thrilling tactical game! Damage seems to rely on bad defence rolling, so can be a bit fickle, though we had spurts of luck which might have slanted things in our game (me with recovery rolls then Samulus later rolling some dreadful defence rolls!).

On the initiative, Samulus held it all game as he had bonuses from holding it the previous turn and for having more fireteams. So we didn't get the most of that changing hands and I was always the reactive player, which was frustrating. Our forces definitely seemed too small to get the most of the game.

With it being our first game there was much rulebook-flicking, unsurprisingly, Samulus felt the rulebook could have done with better organisation, though I can't elaborate on that! Once we got the hang, we mostly relied on a QRS that I found on the FoF website. We never did find the rules for Drones, despite having a recon drone model available. 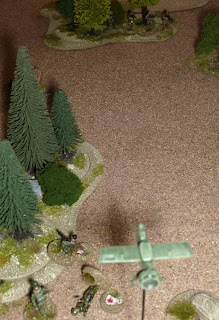 I liked the simple combat mechanics of dice and opposed roll and the later recovery roll was useful to balance the numbers of dice rolled in combat rounds as well as evoke the chaos of combat, where the severity of wounds aren't immediately clear. It did feel odd having a skirmish game just add the same dice for specialist weapons (quite unlike Operation Squad!). While I don't think it is wildly original ruleset, I could see it being a serviceable with bigger forces, particularly with good scenarios and more terrain to discourage defensive play.

Anyone else played FoF and have thoughts to share?