I managed two entries into the Analogue Hobbies Painting Challenge in December - not bad going considering I had some bits to finish off before it started, and the Christmas festivities with families. Well the second wasn't posted until January, but I'll claim it for adember as 95% of the painting was done then.

First was a trio of Nationalist officers for my Spanish Civil War project. First, a figure of unknown provenance in a Germanic uniform, that I did in the khaki of the Condor Legion. Not someone who would usually grace a platoon level action in Chain of Command, though perhaps he might stray too close to the front while surveying the abilities of the Nationalist forces or the effects of experimental tactics by the Condor Legion. The uniform isn't strictly right, I think, as the tunic should be open necked and worn with a shirt and tie. But never mind. As a corpulent fellow, I couldn't resist giving him the flushed look of a man who loves his Riesling and Rioja. 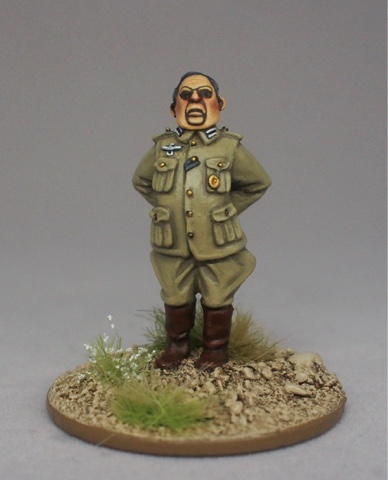 Also, a Nationalist officer who was actually was the show freebie from Partizan this year, meant to represent the actor and producer Sir Donald Wolfit in 'Lawrence of Arabia'. Sculpted by Bill Thornhill. This seemed my best use for him, as he looks a bit like he is giving a facist salute. He has the 'galetta' showing the three stars of a Colonel, so again not someone to grace the table as a combatant in Chain of Command. 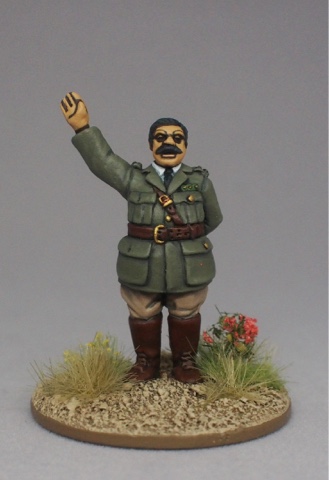 Finally, a Carlist Platoon Sergeant, hurriedly painted in a day to try to match Juan's swift pace. From Empress miniatures once again. 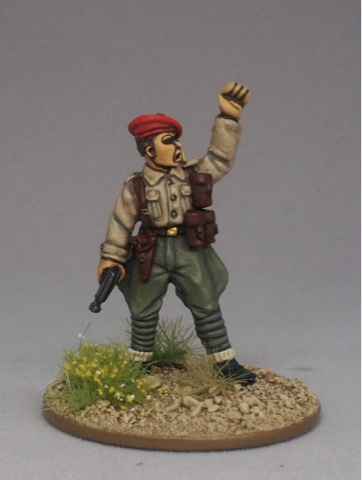 The second entry was for the 'Nostalgia' theme round - a deftly chosen round with some reall touching entries. I almost entirely paint and game historicals these days, but like many of my generation, I got into this hobby in my youth via the juggernaut of Games Workshop. It has been a long time since I've had much enthusiasm for GW's products or games, but I look back fondly on those formative years, and have maintained a smidgen of interest in what GW have been producing (and perhaps perverse fascination with some of their more outlandish business practices). Personally, I  don't appreciate much of their design aesthetic, but occasionally I find they do still nail it with impressive miniatures.

But GW's recent replacement of the classic Warhammer world with 'Age of Sigmar' has brought Gharak back into the miniatures hobby after a couple of years hiatus; certainly unexpected.  And his enthusiasm to do some kind of AoS/Realms of Chaos mashup with warband-based narrative games has piqued my interest a little, I admit. What could be more nostalgic for me than painting up some Games Workshop minis?

So, for this theme round, I presented seven Games Workshop plastic Plaguebearers, the lesser Daemons of Burgle, Lord of Decay and pestilence.

I didn't take the theme as far as the classic, Oldhammer style sculpts, preferring instead these recent offerings. GW are refreshing a lot of their Chaos minis for AoS, but the Nurgle stuff, which I think is a few years old now, is holding up well. I quite liked this kit for giving Plaguebearers a scarier look, as for a few years they were the naff cousins of the other lesser daemons. Though I did find it a bit light on options. I avoided the usual green-hued skin in favour of a sallow grey.

Seven is the sacred number of Nurgle in GW's old lore, so a fitting number to paint up (absolutely nothing to do with that being how many I thought I could paint this week, and a number that didn't include the goofier standard bearer or musician). 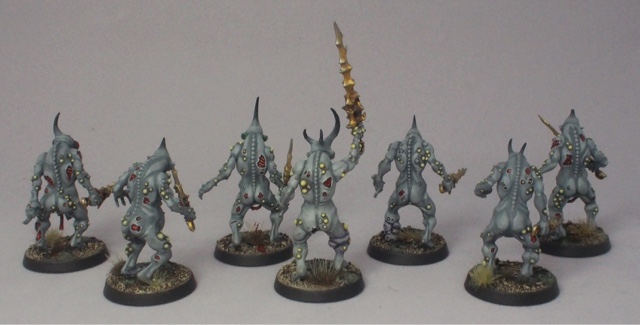 A wildly different topic meant I could mess about with some new techniques - including GW's 'Typhus Corrosion' paint from their new 'technical' range. A bit odd, like mid-brown wash with added grit, that dries very matt. Something to experiment with in combination with pigments, sometime.

I also tried to do some new bases, using a strange method of dripping superglue onto PVA - it dries in odd, naturalistic patterns, that I painted as some kind of pestilential swamp. It's glossy, but doesn't come out very well in these photos. Of the seven, this one ended up being my favourite - I liked his pose, cute chipped front tooth and the fact he has such a wide mouth you can see his tonsils. Who knew plague deamons had tonsils?! 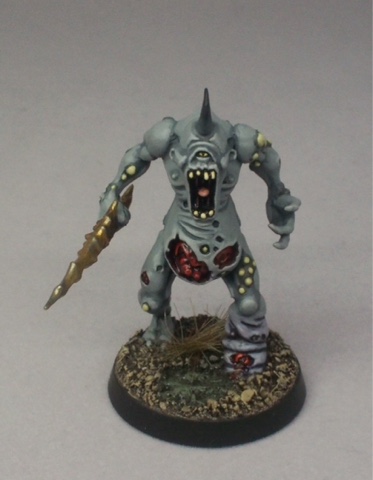 This should just be a dalliance, I cannot see myself investing in mounds of pricey plastic kits. In fact, I've already been hard at work on the historicals...

Gaming-wise, the first club of January, Stu had his copy of 'Zombicide: Black Plague', the fantasy version of CMoN's miniatures board game juggernaut.

It was lots of fun for a light evening's entertainment. I got to play the wizard, hilariously hurling magic missiles into my own teammates because I hadn't found, nor would anyone lend me a sword.

The first attempt was something of a disaster, as we had to improvise a new plan when an un-killable abomination emerged very quickly. It was looking ok here, as we passed and were conducting a fighting withdrawal from the zombie spawn point, but a few card turns later, dozens of them appeared and we were overwhelmed. 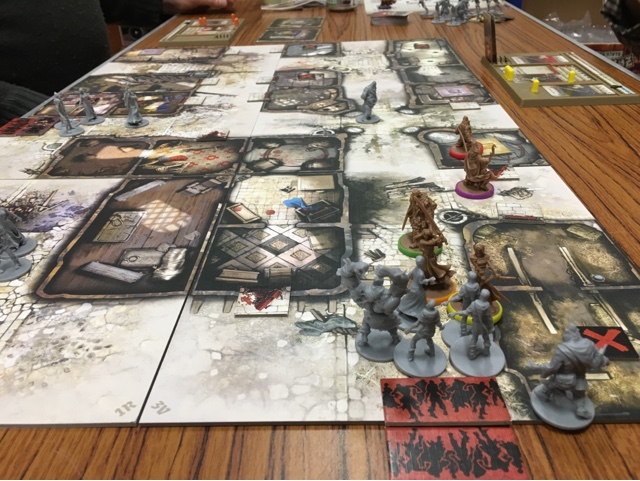 We replayed the same scenario, with a somewhat better understanding of how to play and a new plan. All was going perfectly swimmingly - I was even the proud owner of a sword.

We were making our way to the final objective in the same bottom right corner when the same thing happened: a few spawn cards and many zombies: Maybe this corner is where all the cool zombies hang out.

But by this time we were tooled up and spoiling for a fight. With Dane, Hendrick and Stu heroically  sacrificing themselves/being eaten, Paul and I could fireball and hack our way to the objective and claim the win. 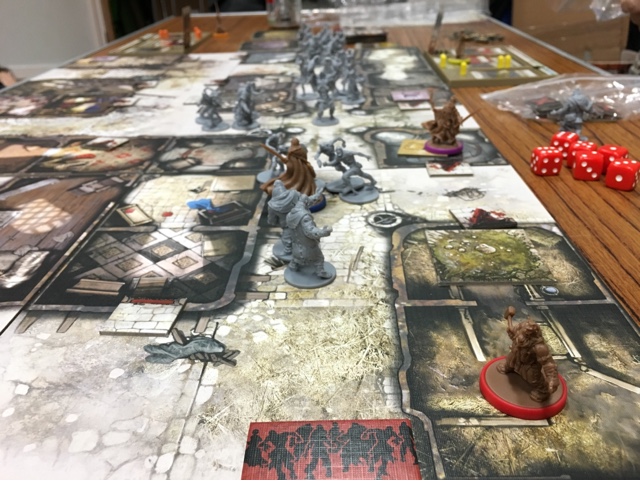 Oh, and finally, Gharak's sent me an awesome belated Christmas present, which might foreshadow some of this year's gaming activities... 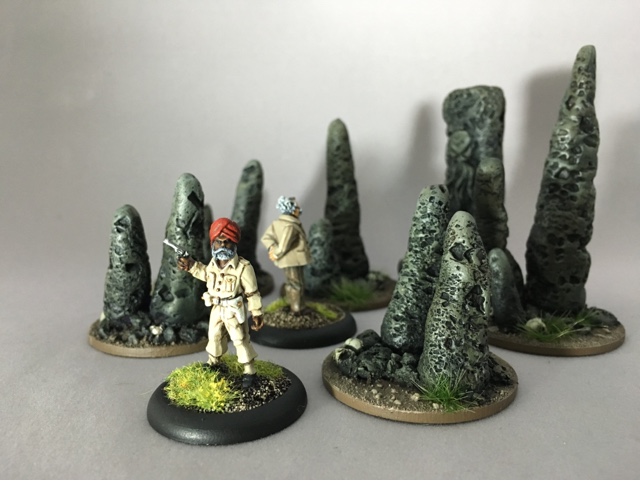 The Prof heads to investigate the unearthly blackish standing stones...

(This post published a week later than planned, due to a Blogger posting error)
I don't think I normally do an annual review post. But I did cast my eye back over the year's productivity and was quite pleased with myself so thought I'd indulge with a brief post.
2015 was a year of two projects, both jolted forwards by the AHPC, as usual. First, bringing the Sudan project to a good place to pause, with 'enough' painted to play either Black Powder or other rule sets of choice. Then I was pleased to put on a game at the Wyvern Wargamers Too Fat Lardies event. 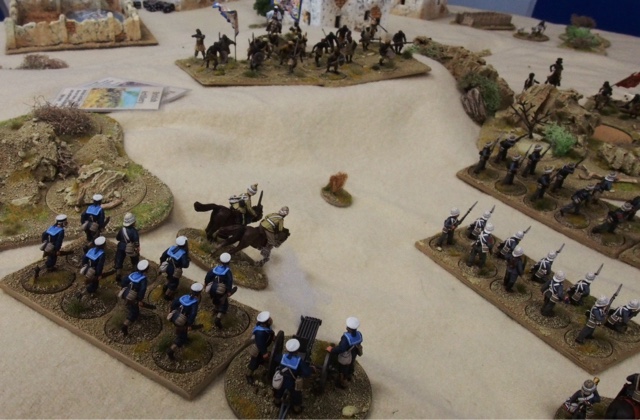 Most of the year I've been working on forces for the Spanish Civil War. They've only seen the table a couple of times, but I think they are shaping up to be one of my best painted projects, and I'm taking my time to add extra details. 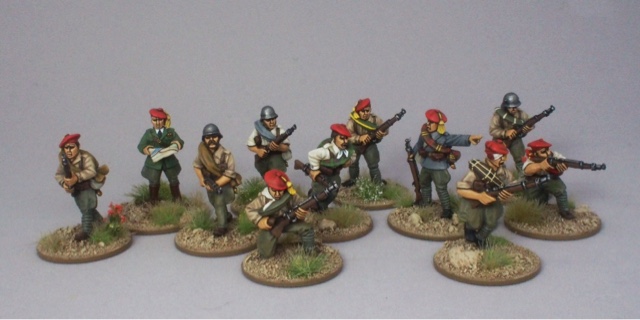 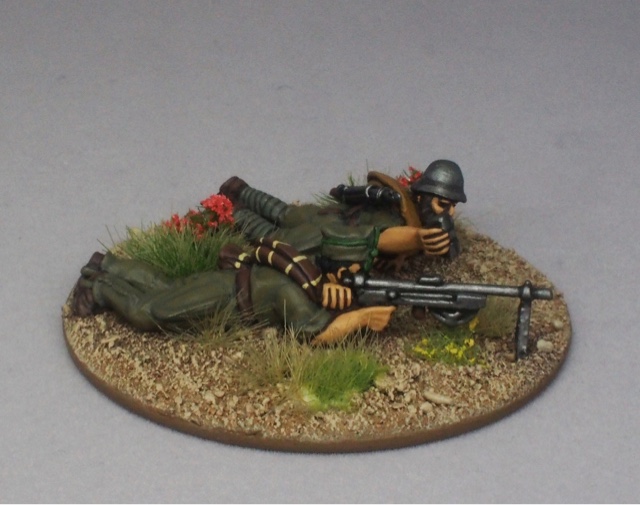 Painting over the summer stuttered due to the purchase of a PS4, but picked up again in the autumn.
Games-wise, 2015 was a bit intermittent. Chain of Command has been by far the most played rule set, in WWII, the Spanish Civil War and AVBCW. I always enjoy games of it, it offers challenges and excitement. Beyond that, I invested in Star Wars Armada, which I do like, but hasn't seen the table enough to earn back the steep buy-in cost (but...Star Destroyers!).
I made it to three gaming shows: Salute, The Other Partizan and a local show. None saw excessive shopping or dramatic lurches into new projects - probably for the best!
In other highlights, I was pleased with my 'er Madge' entry for the AHPC: 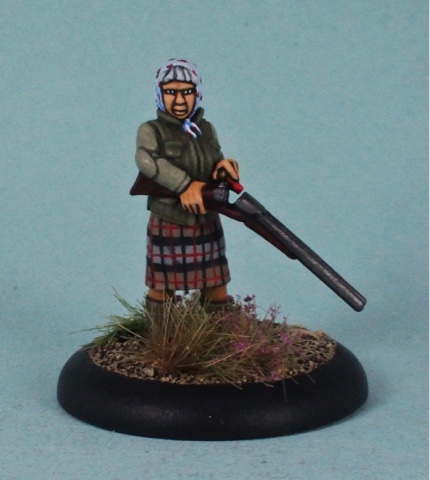 And some of the terrain bits I knocked up: 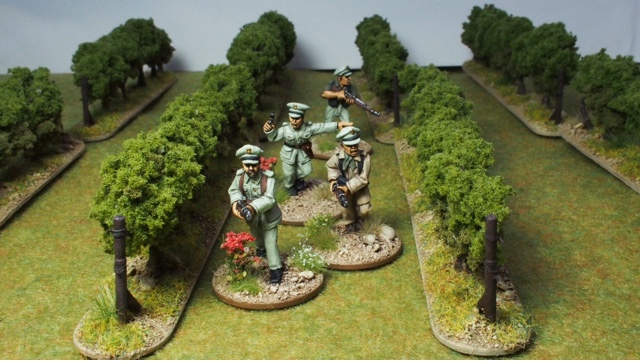 So, what will 2016 bring? Firstly, finishing up the SCW project to three sections of infantry and a range of support options. And a big sort out of the terrain, focused on the Iberian peninsular for both SCW and Napoleonics. Rework or replace pieces that are out of favour and add some new, most urgently large hills and maybe a river. I've sourced another cloth that I aim to pimp up and am hopeful will at last the boards/terrain tiles/cloth debate for me and give me something to tie my terrain collection to. Plenty to be getting on with.
Other than that, I reckon Pulp will feature, perhaps with a Lovecraftian edge. Other than that, we'll see if new projects take off, or perhaps revisiting old - Gharak and I have talked about dusting off the Napoleonics again, which haven't seen the table in an age. I'd like to get to. A show I've never been to before, and for once will probably give Salute a miss. I'm hoping I can get games in more consistently too, either up at the club, with Gharak and friends, and even just bring some of my favourite board games to the table more often.
Here's to 2016!
Posted by Phyllion at 22:18 8 comments: