AAR: 6mm Sudan and Blood on the Nile First Impressions

A fortnight ago I got the opportunity to play the Sudan conflict in a whole new scale, using Paul and Dane's burgeoning 6mm collection. It certainly gave the games a whole new sense of scale. We played the first scenario from the new Blood on the Nile supplement to Black Powder: the Battle of Shaikan. Also known as the Battle of El Obeid, the historical battle it saw Hicks Pasha's Egyptian army utterly annihilated by Mohammed Ahmed's Ansar.

This put an Egyptian column being ambushed from all directions by the Mahdists. Things started badly for Hicks, with command issues meaning his force struggled onto the table into  disparate lines. 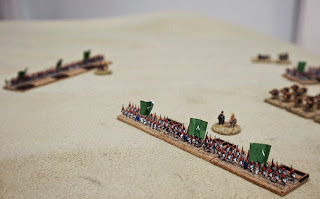 The leftmost Egyptian brigade is wiped out by the impact and the central brigade enveloped. 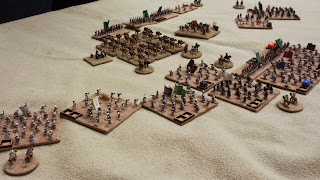 They hold out for one turn... 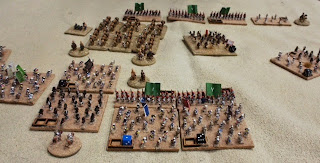 ...before also being swept away. This leaves a desperate last stand of the third brigade - a crushing defeat for the demoralised Egyptian army, just like history.

Thanks to Paul and Dane for letting me join in, your collection is looking great and groaning quickly, apparently.

History doesn't reflect well on a Hicks Pasha, who led thousands of men to their deaths with over-stretched supply lines, morale issues and poor intelligence, overambitious objectives and ultimately serving only to fuel the uprising. Mike Snook, Sudan expert and author of 'Go Strong into the Desert' wrote a damning indictment on the ever-informative Victorian Wars forum.

I had chance to flick through Paul's copy of Blood on the Nile. Thoughts? I've not seen the Warlord campaign books before, so I was surprised it was soft back rather than hardback, despite its £20 price tag. Within was a lot of wonderful eye candy, as one would expect, which I imagine is one of the reasons people pick the book up.

A hearty caveat: I didn't have chance to read it through properly, but a good flick through suggested it had a series of engagements of varying size across all of the campaigns, including a neat partial section of the huge 1898 battle of Omdurman. The stat lines seemed to be pretty similar to those given in the original Black Powder book. There were a few special rules to give an era flavour, but I thought these were surprisingly light touch and something that an imaginative player could bolt on easily enough. One could be more imaginative while still using the core BP rules, for example I reckon my amendments, last played in the Autumn, went further.

I was disappointed in the scenario we played, as it was so utterly one-sided: poor quality troops arriving turn by turn in column surrounded on all sides by superior warriors. Two of my units didn't make it near the fight due to repeated failed orders, and we decided our tailing brigade didn't need to turn up as the Egyptians were destroyed before they were available. So about 2/3rds of our force still wiped our Hicks' force with he loss of only one unit. While that is historically accurate, I'd have hoped for a scenario book that offered a more interesting to game for the Egyptian player. 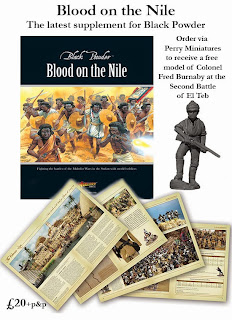 All in all, I wouldn't say I was inspired to pick up my own copy as it doesn't do what I'd be looking for: enrich the games themselves. That's unfortunate as I fancy the Perry version of Colonel Fred Burnaby above. For someone new to the conflict, it's an accessible front door to game it: I'm sure it will suit some people's purposes just fine. But in my opinion, at that price point, I'd say  Go Strong into the Desert is a much better source book, while it only details the Red Sea campaign, it has detailed OOBs, much richer and more insightful background, loads more uniform detail and excellent plates. Mike Snook's Beyond the Reach of Empire that covers the desert and rivercolumns receives   similar praise, though I don't have a copy myself yet.

Perhaps I'm being unfair on Blood on the Nile, having not read it through fully. I'd be interested in what others think, particularly those who have.

Well, the end of January already. A fairly good month for me in the AHPc, definitely an improvement on December. Its also been a month when side duels have started being finished. I had wagers with both Challenge-master Curt to paint 100 points worth of Civil War infantry ,and a general duel with Juan to hit 250 points. Alas, I was outmatched on both counts, still not having recovered from my sluggish start. But they were a lot of fun and served to get me at the desk in recent weeks to give both a run for their money.

December was a month of finishing off Sudan painting, but January started a new project, the mush-discussed Spanish Civil War using Chain of Command. Its nice to be doing something a bit different and an opportunity to try some new methods.

First up, a test paint for a section of carabineros, or frontier guards. 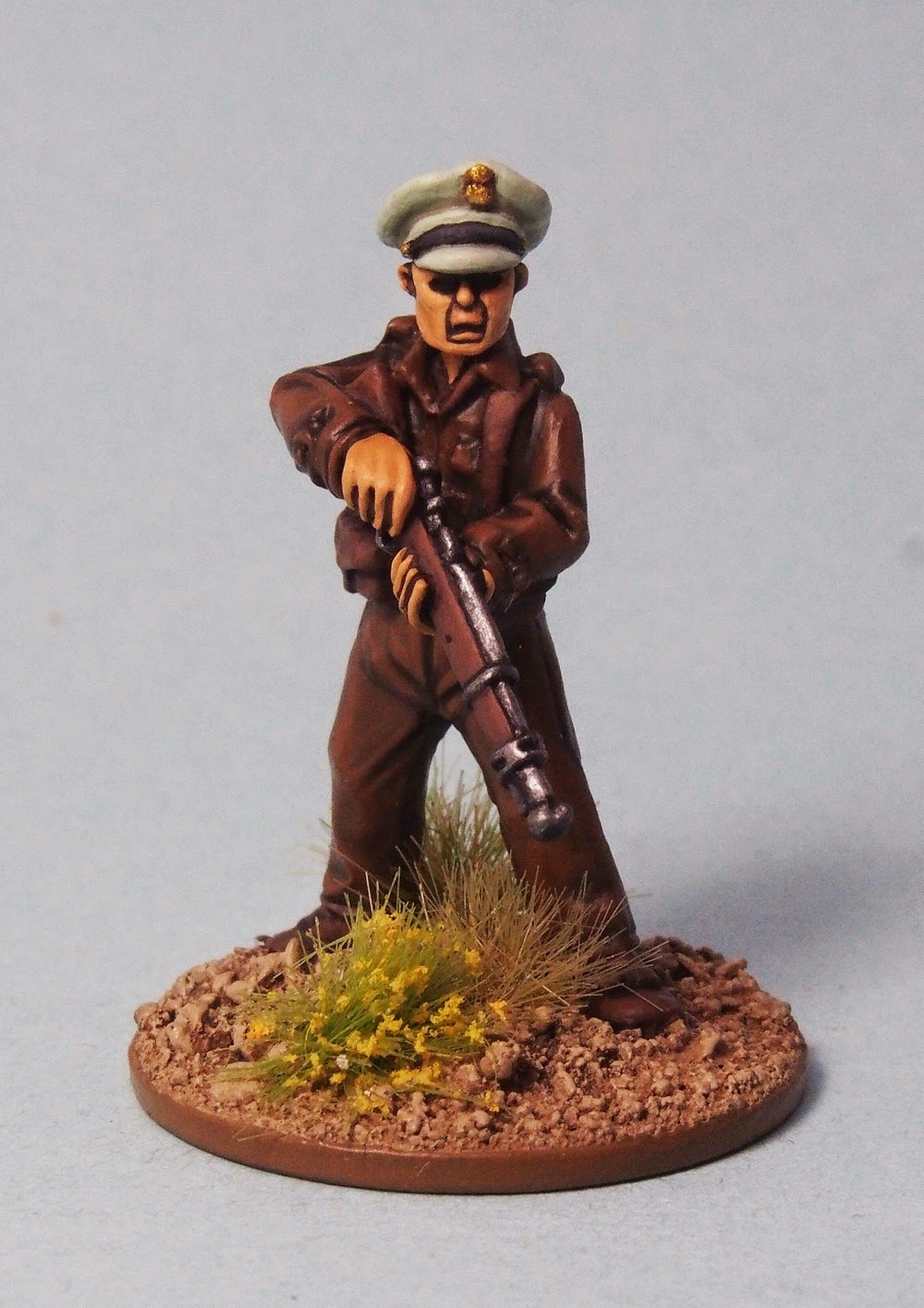 A poor choice of miniature for a test paint: I wanted to try a suitable green of their uniforms, but after some blank staring at the mini i realised he was wearing a 'mono', or workers overalls. Drat. I'm led to believe that the 'mono' would traditionally be blue or grey, particularly if he had republican leanings. Well, I baulked at painting those colours again, as I seem to have majored on blue and grey for most of my projects in recent memory. So brown my chaps' monos shall be, in my little corner of Spain. 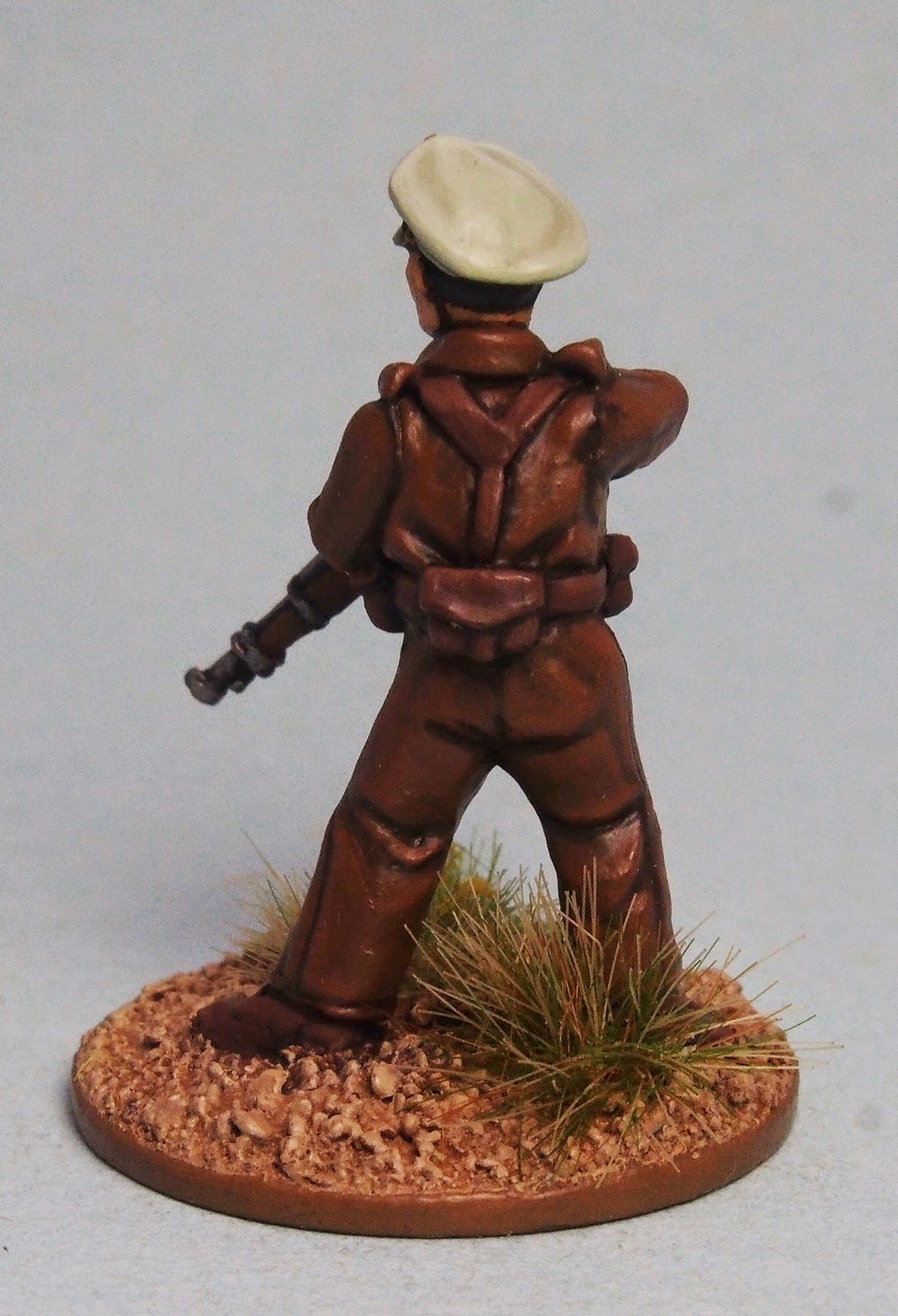 Next up, a swing back to a previous project, 15mm WWII US, to bulk out my support choices. 15mm isn't my scale of choice, I try to paint them too much like 28mm miniatures, and found differences in scale between and within manufacturers a little frustrating. But, this project was a labour of pragmatism, rather than love, allowing me to play some games with lkocal opponents with relatively small cost. I'm pleased with how the basing came out, i was going for 'autumnal'.

A handful more infantry bases, so I can field a full infantry platoon 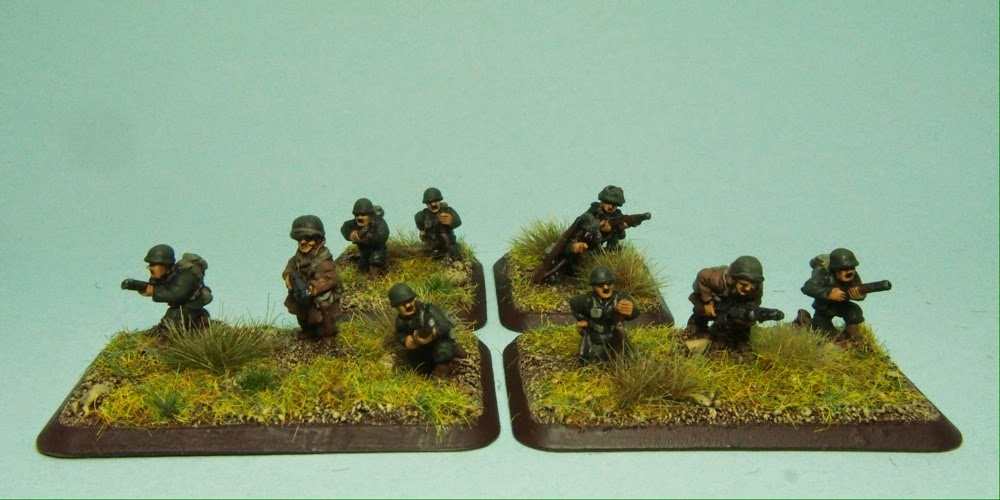 Next up, was the SCW proper. The carabineros, or more accurately, Real Cuerpo de Carabineros de Costas y Fronteras were the Spanish frontier guards and customs police and fought on both side of the Civil War, though siding perhaps slightly more often with the Republicans. Though largely deployed at ports and frontier crossings, they were responsible for patrolling their area of responsibility. They were lightly equipped, with just one Hotchkiss machine gun in the armoury of a command of multiple companies. During the Civil War, support weapons would have been drawn from army or other units, which is what the Chain of Command list allows.

I used the painting guide at Balagan, and some other googling about. While I wasn't able to find many useful images of Carabineros uniforms, this was the best: 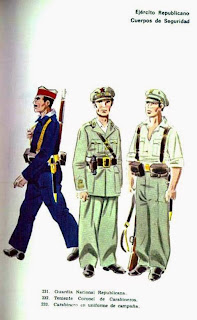 I'm loosely basing my forces around the northern front with Basque forces. so my Carabineros will be headquartered in the region around San Sebastian. I went for a ragtag look compared to the above, to reflect supply difficulties. 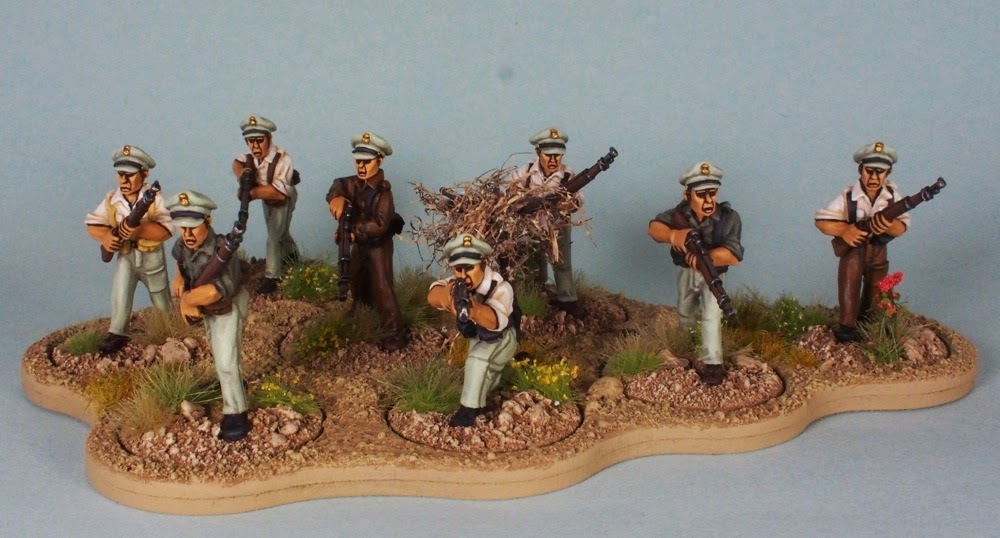 The bases have a different highlight tone to my usual - Vallejo Iraqi Sand rather than Buff. I prefer it. They're similar in shade to my Sudan desert bases, but I'm adding a lot more tufts, including a white and yellow flower tufts and red flowers. The latter seemed fitting, not only as they add welcome colour, but because the red carnation is the national flower of Spain, apparently! These are all from Silfor Mininatur. I am irked that some recently bought 'late autumn' tufts seem to be different to my usual ones - they're my favourites and get used a lot.

The price of Curt's victory in our duel? These are to be dubbed the 'Campbelleros' evermore. Perhaps I need a Campbell to lead them, a brave Canadian ex-Mountie that emigrated to Spain and took up a role with the carabineros...? 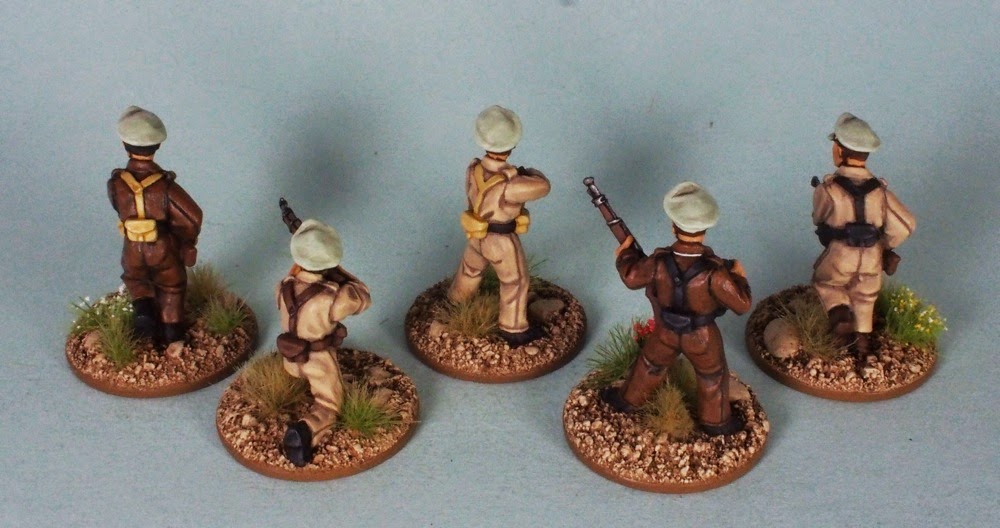 I've the rest of the 20-man section on the painting desk and well on the way to completion. After that, a move to the Nationalist side and some Requetes. Or more Sudan units - who knows?!