The Other Partizan and SCW CoC

I got a gaming double-header last Sunday, kicking off with a visit to The Other Partizan up at Newark. Nor a show I'd been to before, held (for the last time) at the gloomy and labyrinthine Kelham Hall.

Unusually, I was completely uninspired around the traders, resisting more Empress SCW on the grounds that I've plenty more to paint still.

There were some fine games on offer though, most impressive being 'Berne Baby Berne' by the Bodkins. Full of excellent touches like this camp scene 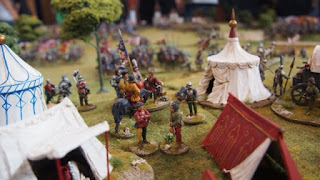 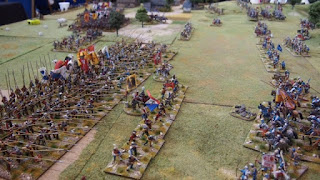 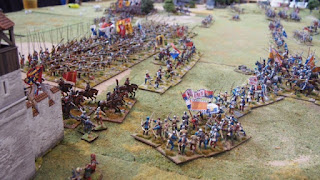 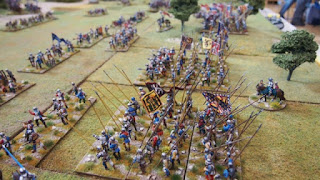 Other games catching my eye were Simon Miller's sizeable 'To The Strongest!', a large 'L' table with two games on 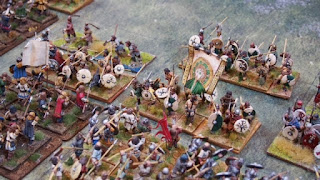 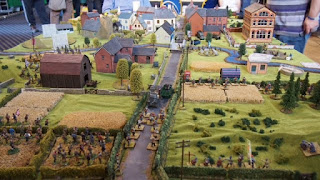 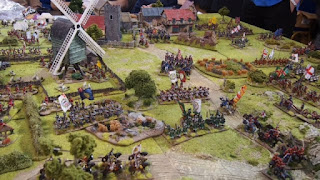 And in one of the even gloomier rooms a nice looking Pike and Shotte skirmish game. 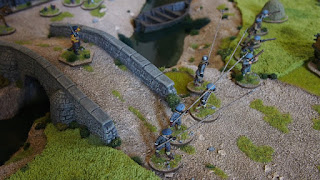 So what did I think of Partizan? Well it was a nice day out, but felt like an 'old school' wargames show, similar in feel to Triples at the Sheffield Octagon. While the grognards may grumble , I think its a good thing for the hobby that many shows have moved on to more modern venues with better amenities - not least some decent lighting! After all, what's the sense in all the effort to put on lovely looking games if people can barely see them? And the trader shaving to supply torches to their customers is a joke , frankly. The show didn't seem busy on the Sunday, so hopefully the more to a new venue will reinvigorate it.

After the drive home, I headed over to Wyvern for a game of Chain of Command Espana with Ian and Matt. For a three-player game, we had two under strength platoons attacking Ian's Civil Guard. The balance didn't quite end up being right and Ian was up against the odds, but it was a fun game nonetheless.

My Carabineros take up positing in an olive grove, preparing to rush across the open ground 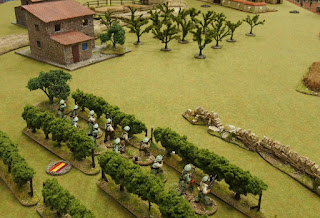 Ian deployed a Machinegun team in a do I any position in the church tower. With Los across most of the board, this could have caused real problems. But the dice offered a fitting moment - with its first shot, Matt's T26's HE she'll scored a direct hit, with a triple-6. Which invoked a rule I hadn't come across in CoC: the building starts to collapse, and Ian's gunners had to rapidly evacuate and  redeployed. A somewhat less dominant position! 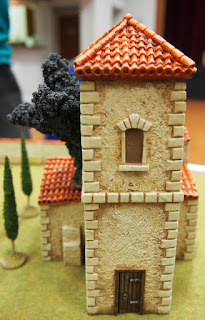 Definitely a moment for a 'boom' marker to be applied

The Republican advance continues, making best use of meagre cover. 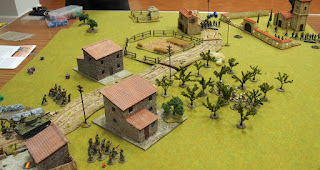 Taking up firing positions in a fruit grove, the two sides got bogged down trading shots for limited effect on the big sections. Matt's T26 was a threat, but advanced dangerously close to get firing arcs, cue a bold, but ultimately unsuccessful attempt to bring it down with Molotov cocktails. 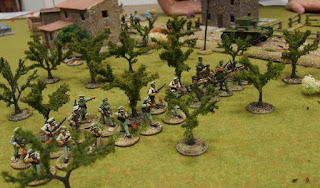 To break the deadlock, my troops led a desperate tear gas attack and assault against the fortified churchyard, but we ran out of time to bring all of the action to a close. While Matt and I's Republicans were steadily grinding Ian down, we hadn't achieved our objective of forcing the Civil Guard from the field: their heroic defence against massive odds took the game.

With that I headed home for a much-needed sleep!
Posted by Phyllion at 17:14 6 comments: