Well, it's been a while. More than five months since my last post. But no need to worry - I've not fallen off the ends of the earth or been taken by dimensional horrors (yet). No, it's just been a deeper summer lull than usual for me, with little miniature hobby enthusiasm to post about. Due in parts to other hobbies, distractions and general life stuff. Including quite a few games of Netrunner, both in my local 'meta' and travelling to a couple of organised play events.

But I've been languidly back at the brushes in recent weeks, to the the point where I've actually finished something - huzzah! Yes, another two Requetes for the SCW, started months ago, sat idle for the summer and finished off over the past fortnight. 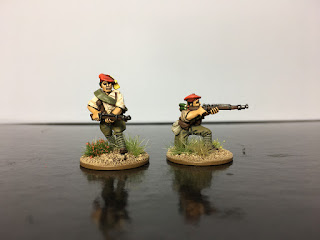 But beyond these, I've not been totally idle. After the last AHPC, I dug out all of my terrain for a good sort out, into worthy completed pieces, bits that needed some repairs or a refresh to meet current standards, and stocktake the many bits and pieces that I've picked up over the years. One of the new pieces that I built was this walled apple orchard: 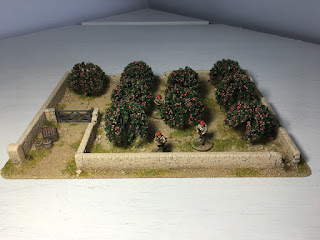 This was my first dabble in using the crazy-cheap trees that can be sourced from China on eBay. While a bit uniform and of dubious colour, I tarted mine up with some paint and reckon they came out ok. As good as model railway trees on the cheaper end, anyway. 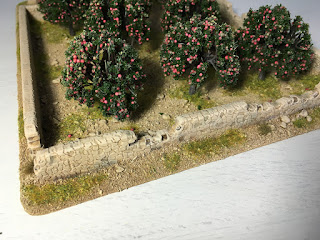 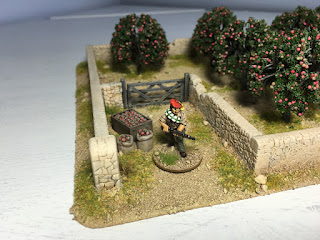 While I could have squeezed a couple more trees onto the base, I left it a bit roomy to easily fit miniatures on, giving the effect of an orchard while hopeful the trees would get less mauled with usage. I did briefly consider doing the trees separate to the main base, too, but felt it unnecessary..

I also knocked up another 'coir mat' field as more area terrain always comes in useful, and reworked a kitchen garden/veg patch that I made years ago. 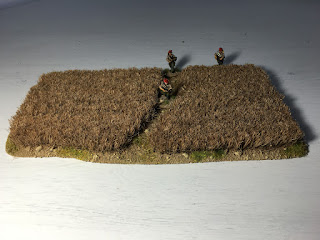 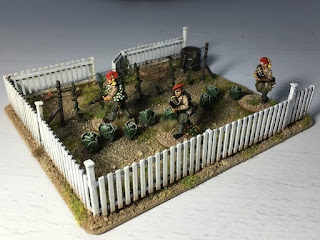 And a whole host of other repairs, including re-basing and re-foliaging my hedgerow set: 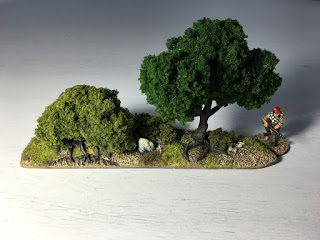 In a nutshell, what I've been up to miniatures-wise. But, as they say, 'winter is coming' which means we're heading full tilt for the Analogue Hobbies Painting Challenge. For that, I've got miniatures to prep, including a new project with that brother of mine Gharak. You should definitely see more of me over the winter months!
Posted by Phyllion at 21:14