Evening all! As the weather turns warm, then cold again in the UK, I'm steadily working through the current Sudan project.

I knocked these 16 Mahdists out in a week, though it was a week with quite a bit of painting time, maybe 12-15 hours all told. They will join the first batch I've already painted (though I need to repaint the bases, ergh), making a couple of units of Nile Arabs and the start of the Beja. I'm happier with the colours of the jibbeh's on this lot, I've used a lot of Vallejo Iraqi sand and tan yellow. They still need a squirt of Dullcote.

I'm making up a force for scaled-down Black Powder, aiming for just 8 models as the standard unit size (I think I will drop ranges by about 1/3rd to accommodate). This puts me well over half of the Mahdists infantry painted. As they are individually based, I've unit bases from Warbases to pop them into, this should make it easy to change system or scale if necessary.

I'm working roughly from the lists featured in Black Powder, slightly reduced to suit my budget and painting speed. However, I'm making an Anglo-Egyptian force rather than pure British. I think having both steady and less steady troops in the force should give the Mahdists more of a chance of breaking the line and make for a more tactically interesting game.

This is my draft order of battle for the Mahdists, I've the miniatures to field this, albeit in various states of readiness.

The Beja will be fanatics, to represent their.. well, fanaticism!

I'd like to add more skirmishers (those plastic boxes just don't contain enough rifles!) and a captured Egyptian Krupp to add more variety and oppose the Anglo-Egyptian firepower.

The charge as the Anglo-Egyptian firing line would see it

I also popped a few of those palm trees that I got at Salute onto 60mm round bases, which as you'll recall can go into larger bases to mark out an area. The trees are a bit plastic-y, but at a fiver for 20, the price is great. 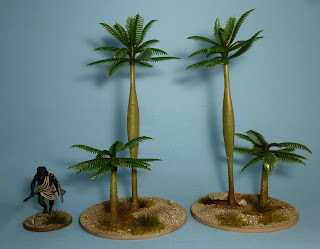 Next up, more terrain and starting to prep the next bloc of Mahdists while the enthusiasm is there!
Posted by Phyllion at 21:39