The other day, I was digging through old cases and boxes of long-neglected miniatures. And I came across a couple of highlights from the past that I thought I'd share.

My hobby youth was spent in Games Workshop, primarily playing Warhammer 40,000. When I went to University, the local GW was a pokey little place and unwelcoming to slightly more mature gamers as well as being away from my close-knit group of gaming friends. The Uni gaming club wasn't appealing either, they seemed to solely play 40K, often unpainted and on ramshackle terrain while I've always been one for the spectacle of fully-painted forces and nice terrain.

I eventually stumbled across the excellent Patriot Games in Sheffield, who were starting to stock some exciting new wargames ranges. I was most taken with the awesome sculpts of the fantasy skirmish game Confrontation by a French company, Rackham. I could have been tempted by half of the numerous  factions and spent hours agonising over the well-stocked ranges. Eventually, I went very out of character and bought the Orcs faction. This was quite a step outside of my comfort zone, having played Imperial Guard and Empire in Warhammer (looking back, I probably always was going to end up a historical gamer...). 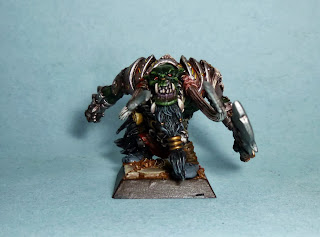 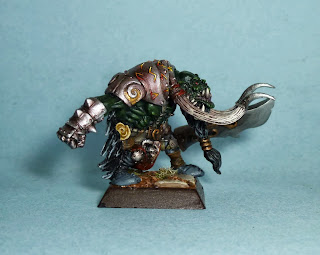 This is my version of Dayak, one of the commanders from the Trackers of Bran-o-Kor box. While most people were following the Rackham style and experimenting with non-metallic metal, I stuck with my trusty metallics. 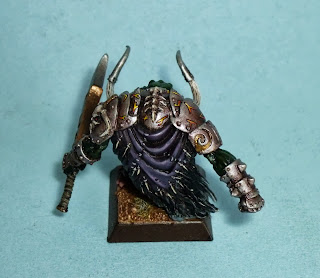 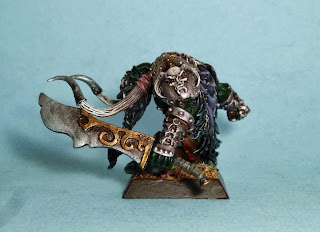 As well as a growing group in Patriot Games, Conf had a great community setup around a number of national 'confederations', including the UKCORD, which is still going in a different form.

Rackham also did inventive miniatures like Samurai goblins and Roman Orcs. On the latter, I did a few conversions of other orcs to Roman-ise them. This is one of the ones that came out best: a Brontops rider with a head swap and additional shield, sourced from a 54mm plastic legionary. 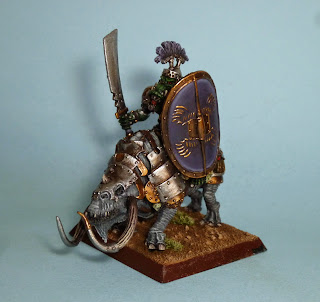 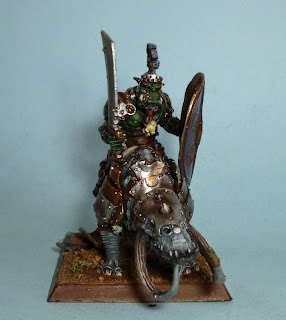 Sadly, both of these have taken a few knocks to their paintwork.

Of course Conf went the way of the dodo due to the baffling actions of Rackham, which is sad as some of its iterations were great systems and the miniatures were excellent. The Orcs were a riot to play too, while there was nothing subtle about them, but they were surprisingly competitive given their skills tended to be restricted to hitting things really hard. Eventually, I dabbled in Infinity, Gharak and I dabbled in some short-lived historical projects and more recently I've focused pretty much entirely on historical gaming. But while GW leaves me completely cold, I do still look back on Confrontation with nostalgia. 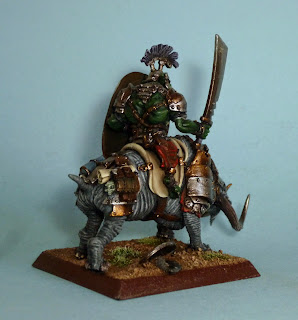 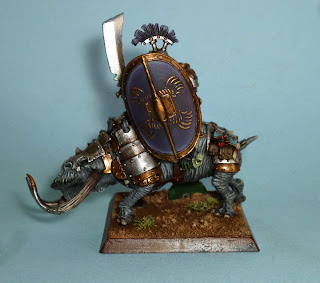 That's enough nostalgia. Over a family weekend, Gharak and I squeezed in a couple of games of Angels 20, as he's picked up a starter and booster of the second set, Bandits High. This adds the pacific theatre to the original set and here my nippy Japanese duel with his hardy US squadron over a Pacific island. 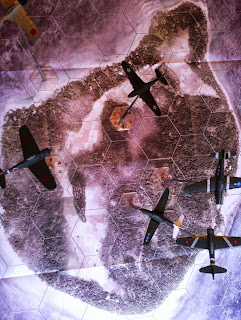 Sadly, the fragility of the Jap fighters was their downfall, but one again Angels 20 was great fun and perfect for late evening when you've just a little time for something light.

Normal service to be resumed soon - another ten Mahdists have just come off the painting table and another batch on. With Samulus over for a game next weekend, I'm trying to get as much of the Sudan project ready as possible for my first small game of Black Powder.

A quick update today, with a small batch of Beja finished over the last week. A bigger batch would have been more efficient, but these were all ready to go a week ago. This puts the 'Mahdist count' at 39 - I'll take a group shot at some point.

I've another larger group that I prepped at the same time and are just ready to be started. Once they're finished, I should have broken the back of the initial Mahdist forces, which will be a relief!

Update:
I didn't think these merited a post of their own, but It feels worth marking the end of my recent rebasing. These Beja camelry are now on 'pill' bases rather than the square ones before (cut with a saw, no less). 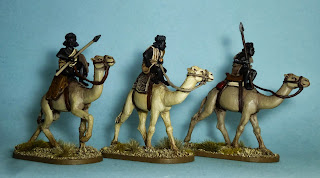 I did quite a lot of damage as I was rebasing them as I took the opportunity to pin them onto the camels (heaven knows why I didn't do that in the first place!). So a lot of tidying was required and I also tweaked a few of the colours to make them match my more recent Mahdists. 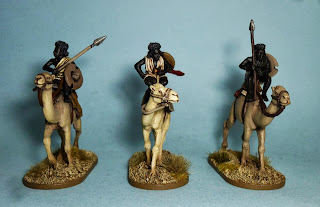 Perhaps there is something in the air at the moment as Mr Awdry has also been rebasing old work.

Having a few spare moments, I took some snaps of my Anglo-Egyptian force for the Sudan so far. It is starting to look lie, a force rather than a pile of lead, at least!

They will be bolstered by more regulars (RMLI and Egyptian), plus a screw gun and a few hussars.
I've put them on their sabot trays (Warbases, of course), these will be textured and tufted when I have a weekend for a really dull job.

And to round off, the now obligatory vintage effect photo.

I have also found myself volunteering to paint a few minis for a charity game at Triples 2014,  all funds raised will go to good causes Help for Heroes and Men Matter. they've created a blog to highlight what they're doing and progress: Bloggers for Charity. I'm hoping I'll be able to make it along to Triples to see the game and meet some of those involved.

The Naval Brigade get some firepower 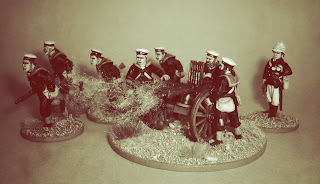 The Sudan project is picking up pace, with a number of batches on the go at the moment. The latest off the painting conveyor is this Gardner Gun, the first fire support element for my Anglo-Egyptian force. 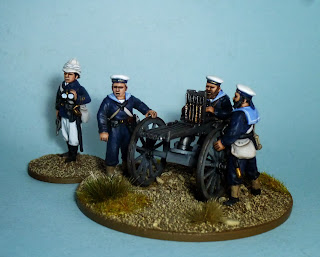 I had to do one of my least favourite things and paint the miniatures before basing - normally I paint the bases before the miniature to avoid any dry brushing errors and handling the miniature too much (something I'm bad enough for with based miniatures). Doing things this way seems slower and usually entails some tidying up.

You can see a few spent shell casings on the base here, an idea unashamedly lifted from Mr Awdry's fantastic version. 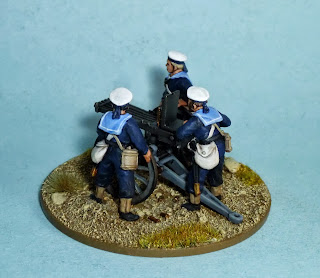 I based the officer separately as I wanted to fit the gun onto a 60mm round base. I think this is a fantastic sculpt. After I'd Aiken the photos I realised if forgotten to 'tuft' his base, since rectified. 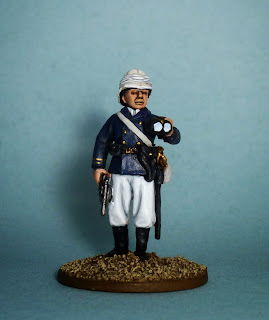 I actually went back and added some detail I'd left off the first batch of naval brigade, particularly the white edging on the collars and gold 'lettering' (actually blobs) on the caps. Here's an 'action shot' of them all together. 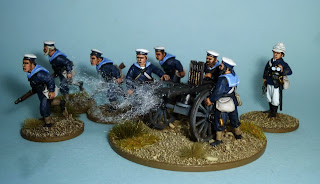 The second and final game of last weekend, the Professor and co try to evade the Constabulary, who pursue in their battered old truck.

We played a 'rolling road' game, where the terrain moved back 12" each turn and was randomly regenerated. Tweaking Pulp Alley, the 'plot points' represented our heroes' escape, collecting 3 would be enough to escape completely. The points were randomly distributed on the square foot of road each turn along with a random hazard which was a peril (people, donkey carts, (!?), rocks). The road could also veer, determined by the person with initiative.

The vans were represented with the stats and skills of 'sidekick' characters and could take five hit points before they were damaged beyond use. Each van could move 3" in a combination of forwards or sideways (so could move up the board or sacrifice speed for manoeuvrability. There was also a 'floor it' 6" move with no shooting or plot points allowed. All shooting and collecting plot points/challenges was done as per the rules.

Turn one, the constabulary start as they mean to go on with a cheeky shunt... 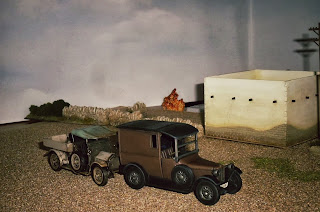 Whoa! Out of nowhere a local cart appears and their pursuers shunt them again, forcing our heroes to swerve sharply and career around it. A close one, that. 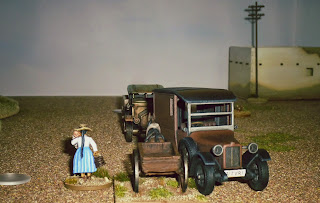 With two plot points collected, our heroes fail to collect the third that could be vital their escape, while their vehicle is starting to get battered. 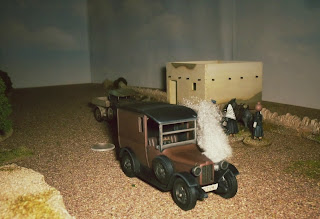 With a cough, a splurt and a bang! our heroes' van gives out and skids to a halt. Detective Adolfo rushes out to take our heroes into custody. Time for the Prof to pay a hefty fine and perhaps pull some strings to get out of this one! India will have to wait. 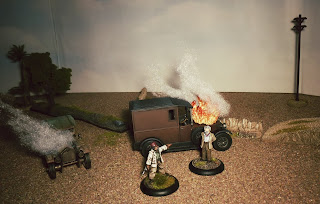 Some fairly simple modifications made a workable game with a different challenge - something of a race against time to collect the plot points before the vehicle gave out! The 12" rolling road took some getting used to, with hazards fast approaching. Pulp Alley took the modifications well to make the game work while retaining all of the key systems.

Next time, I'd be tempted to drop the vehicles to weaker 'allies' rather than sidekicks as they were offensively powerful. Well, the Constabulary were, as evidenced by the result. That and/or giving the vehicles 10 hit points to spin the game out longer. But it was a fun diversion for an hour!
Posted by Phyllion at 22:02 1 comment: