Challenge entries five and six: the KRRC, Commandos and Pulp

Entry numbers five and six were both small, the result of finally getting around to watching Danish series 'The Killing' (with its mighty fineSarah Lund jumpers). Although quite excellent, it eats into painting time as it is subtitled, so requires my full attention. I went off piste by making up some woods and rough ground, which set me back.

Here's a firing line of King's Royal Rifle Corps for my dalliance with Colonial Sudan. I think I'm in a 'grey phase' at the moment, it certainly seems to be a feature of most of my entries. I had issues with them, I ended up re-doing the grey as it didn't match my first batch. It still isn't right but is closer, the chap on the left of the second photo was part of batch one, you can see that he already had grubby trousers whereas the rest are clean as a whistle (for now!). Perry sculpts - what else?

Next up, the first of the Blackwater Gulch characters, this one 'The Norwegian', I'm reliably informed he is an homage to the TV show 'Hell on Wheels'. Heaven knows what use I'll find for him other than BWG, perhaps a slightly unbalanced hitman with a penchant for antique firearms and bullwhips in a Pulp game? The flash of white among a head of very black hair is inspired by a chap I know. 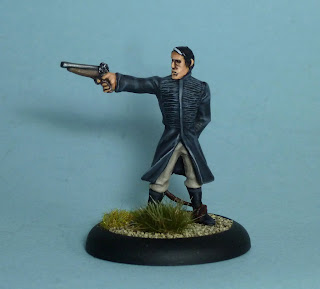 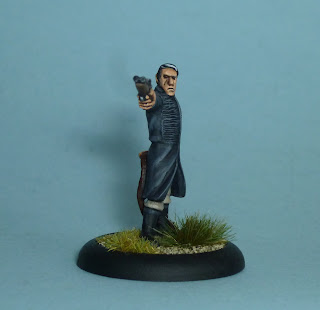 And a daring female adventurer for Pulp, ready to take on the world. A cracking Artizan sculpt. The blue comes out very pale in the photos, the second image is closest the the actual colour. 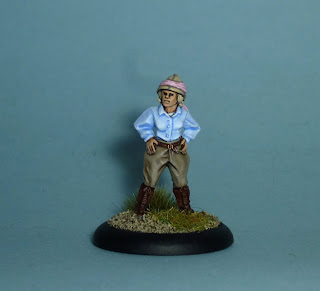 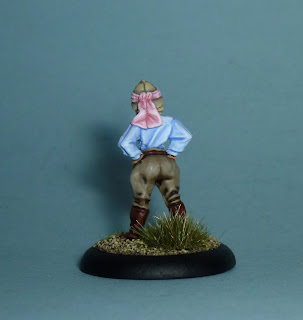 Entry number six was just four models that I turned around in a few days: Artizan Designs British Commandos. One last pack I had in stock, I've 20 or so done but mostly wanted the mortar and PIAT finished. They will come in handy, offering some punch in games of Operation Squad. I drilled out the PIAT and added a wire to the radioman (since dubbed Mr Hendrix), both if which came out really well.

With these, I'm sitting at 195 points, barely over a third to my 550 target. In a week we'll be two-thirds of the way through the challenge. Eek!
Posted by Phyllion at 09:36 5 comments: 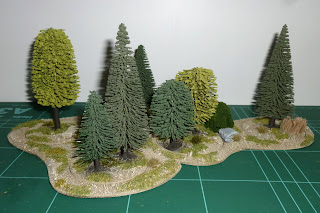 I recently picked up some of 4Ground's laser cut wood 'Tree Bases'. I thought they looked really useful, were well priced at around £1 each and while restricted to the shapes they sell, would save an age cutting my own out. I hoped them being two layers of wood would mean they wouldn't warp when sanded and flocked. I do like that the base inserts can be pulled out if you wanted to put more miniatures in, particularly when using formed units. Also, different terrain could be switched in and out by building a variety of the 60mm inserts so I bought an extra pack of 60mm bases to do so. 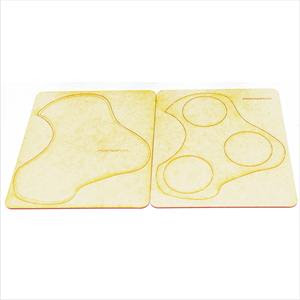 Image from the 4Ground site

Happy to say these were a smashing success! I made half up as trees, using Noch ones I had in stock. These trees are a tad small for 28mm, so I'd like to get a few bigger trees to mix in. The woods are also a bit sparse for thick woodland, I was reluctant to glue any trees to the base to make them as adaptable as possible, though I did liberally apply rocks, hedges and tufts. I might add a few trees to 2ps which I can drop on top. Of could these and the inserts could also be used as scatter terrain without the bases. 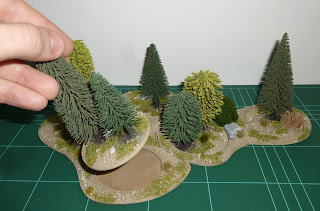 I also made some as simple 'rough ground', for Sudan or Spain. These were a doddle, I just used rocks and bits that I had in stock. One thing I did to each bases was sand the sides down at an angle and apply some wood filler, to avoid having a 'stepped' look. This is optional but I'd recommend it to make them look their best, while it took a bit longer, it was still less than making the whole base from scratch.

Pros
-tough and durable, no warping at all.
-adaptable, both in terms of different terrain types and removing pieces in-game to accommodate miniatures.
-inserts can still be used as scatter terrain
-for smaller scales, I think a bit of work could be make them into pretty decent hills.
-really well priced at 90p or £1.20, can't argue with that!

Cons
-I felt the needed some time sanding and filling to make them look their best.
-only two shapes available
-larger sizes would be good for 28mm scale gaming

I'd like to make up some trees on 2ps, larger trees on 60mm inserts as well as some tall rock structures to get a bit more height and make more 'blocking' terrain. I think I could do a few more adventurous things too, perhaps overgrown ruins, or something in an archway shape which connects two of the inserts. I also want to apply hacksaw and imagination, discard the inserts and make them into a pond or marshy ground.
Posted by Phyllion at 10:23 1 comment: