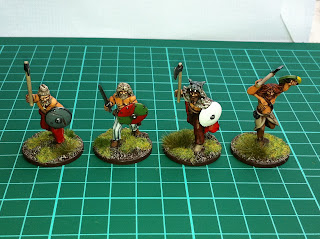 Just finished these off and am pleased with them - four colourful 'Berserkir' for my Viking warband.
The one with the white shield needs an LBMS shield transfer applying.
Posted by Phyllion at 09:34 2 comments: 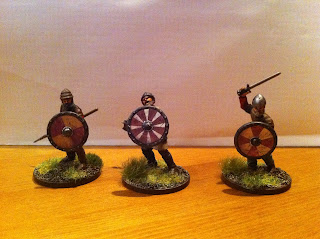 So, I wussed out of dipping my Saga Vikings. But they are still substantially quicker to paint than anything Napoleonic.
These are the first few Bondi, finished with Little Big Man shield transfers. A doddle to apply and came out well, even from just a phone pic.
I'm impressed, though the Saga-specific transfer sets are a bit of a jip - by my maths you get better value from the normal ones buried in the LBM section of Gripping Beast's store.

Posted by Phyllion at 20:16 No comments: 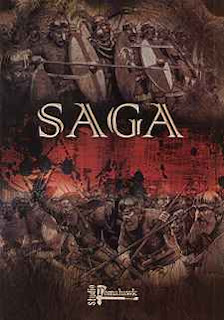 Ok, bad joke. But, like everyone else I've been tempted by Gripping Beast's Saga rules. At first glance they are well-presented, tactically interesting and well-explained. I look forward to testing them out next month.

Luckily, I already has some Wargames Factory plastic Viking sprues and GB metals from a previous aborted project. They made a 4 point warband - result! Though I've already supplemented this with some levy archers for variety.

Posted by Phyllion at 20:10 No comments:

Email ThisBlogThis!Share to TwitterShare to FacebookShare to Pinterest
Labels: Saga

News and a pic 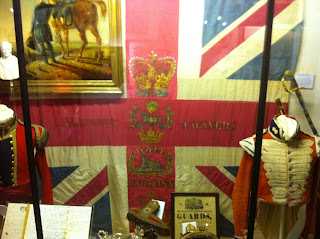 So, personal life scuppered painting, let alone gaming in recent months. In a nutshell, I've relocated with work to London for the next couple of years. The change is great, but things got pretty busy, especially as I spent some months working in the city and only being home at weekends.
Anyway I'm in a new flat now and looking to new projects. News on that soon.
London also presents many opportunities for those with historical interests. The first is below - during a relatively aimless wander around tourist London my girlfriend and I stumbled across the Guards museum (and caught some of the Changing of the Guard).
The museum was small but reasonably priced and had some impressive artefacts. One is below - one of the Guards regiments' Colours carried at Waterloo. Awful that I forget which, but there were a few in varying conditions.
I found being in the presence of these humbling, and couldn't resist taking a snap. Among other artefacts for the Napoleonic connoisseur was the lock and some remnants of the gate from Hougoumont. Fascinating.

Posted by Phyllion at 18:12 No comments: