AAR: A dabble in AVBCW at Wyvern

I made it to Wyvern again a couple of weeks ago, to play an A Very British Civil War scenario using Stu's collection. We used Chain of Command, as its known and remains popular at the club.

Stu kindly put on a scenario for Mark and I involving the Astwood Defence Association protecting their most prized asset. Stu briefed each player:

Since the opening salvo in the war things have been quiet for the Astwood Defence Association. They had guarded their parish boundary from "wrong'uns" and had cooperated with the authorities when required to do so.
With 149 men to call upon and a WW1 Artillery piece as the centre of power they believed they could see out the current difficulties until peace returned.
That was until the crack down, fliers were posted at the guildhall requesting that all weapons were handed in to the Government to aid in the war effort. Sources within the council has indicated to the ADA that if they did not offer up the Artillery piece it would be taken by force.
With the gun they knew they would be easy pickings for other stronger forces close by. The Gun would have to be moved, if only they had time....


I played the dastardly Fascist forces: two sections of Police and one section of BUF. After a short, sharp patrol phase, this was the layout: the sacks of grain being BUF jump-off points. The location of the gun was not known - my bet was either in or beside the farmhouse courtyard. The ADA would have to move it off one of the exit roads on my right flank. 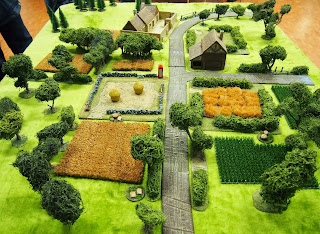 In a play to start aggressively and throw the ADA off-balance, I brought my armoured wing right on - a recon patrol. Mark realised he hadn't taken any antitank, though we consulted carefully for the MGs vs.vehicles rules, and agreed for the sake of balance and good fun that each of his sections could have a single, precious mills bomb. 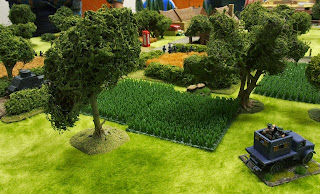 Mark shut down the quickest road route with a MMG team and sniper, forcing me to avoid the danger by pushing through the wheatfields either side. 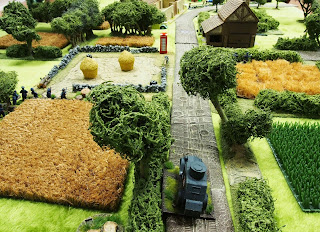 Brave ADA troops leapfrogged the hedgerows under covering fire. This was to oppose my troops which were massing on the right flank, particularly after the MMG drove my 'armour' off the road. THat suited me in the end, as they could draw line of sight to the exit points for the gun. 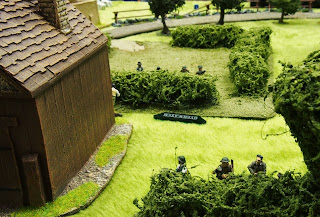 Seeing the right as a knotty problem to be unpicked slowly using the armoured cars, I pushed asecond section of policemen widely around the left to avoid the loitering ADA sniper. I hoped that Mark would be too focused on the other flank to pay them much attention. Then, they could seize the gun ansd claim victory - bwa ha haaa! Alas, another section of ADA emerged from the farmhouse, and the two sections settled down into cover to trade shots 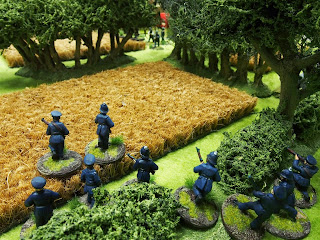 With my left flank ploy blunted, I turned back to the right, pushing police into the dead ground behind the barn. But.... 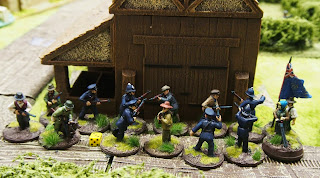 The local farmer's association were inside, preparing the gun to be moved. A melee ensued and the my police driven off, though the farmers were also mauled and combat ineffective. A burst of fire from the armoured cars' lewis guns saw them rout too. The combat was hotting up.

The dispositions - both forces split either side of the road - I nestled a sniper to the rear of the central field with the corn stooks, with good lines of fire. I also held the advantage of a third section off-table. But where to put it on, to swing the game? 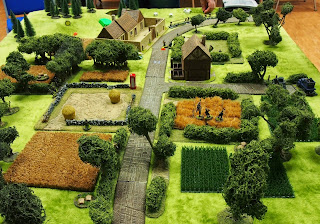 Morale was balanced - both of us around the 5-6 mark, and I couldn't see an obvious way to swing the game in my favour. For a few turns, I spent all my command dice on the police section and my sniper on the left - firing both if possible every round meant they could see off the more numerous and lewis-gun carrying ADA section. While the recon, fairly safe from significant harm on the right, just sat on a hedgerow, reluctant to proceed further without support. 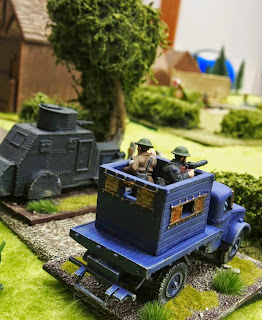 With the left won, though my section now below strength, both our morale around 4, Mark pushed a fireteam down the road to the barn, no doubt in a further attempt to move the gun inside and claim victory. Seeing my chance, I spent a CoC dice moving a jump-off point far up the left, putting my BUF section in good cover with flanking fire. 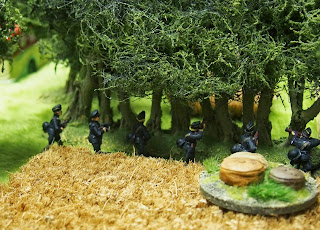 A sharp of fire burst saw the attempt to move the gun blunted and the ADA team fleeing back down the road. At this point, Mark's morale collapsed and he conceded. 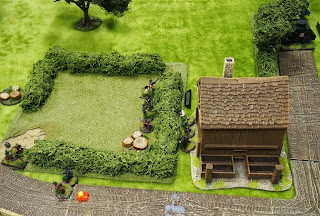 All in all, a cagey game of Chain of Command. Investment in attacks on one flank or the other paid off for me, as I wasn't afraid to withdraw to the lee of hedgerows when out-gunned. Really, the ADA section with lewis gun should have beaten the police, but I just had more command dice to spend so won out. And something to be said for patience - having a fresh section to bring on when a moment presented itself paid dividends and claimed the win.

My taking armoured cars did riskunbalancing the game, without any antitank on the opposing side. Mark had 10 support points too, the shame! But actually, the MG against vehicle rules worked well - they could mount up shock (forcing me to spend orders removing it) or drive them into reverse or towards cover. While I had two mobile lewis guns that were fairly safe from fire, this just made up for me having one less to start with. It didn't overly unbalance the game - though I suspect Mark will have learned a lesson to bring something with a pit of punch.

Its interesting that as well as the different feel of AVBCW, playing CoC in 28mm felt rather different to 15mm - much closer terrain and larger footprints of units gave even more of a different game. And boy was I happy not to be attacking against German MG42s once again!

I've always been intrigued by AVBCW, and can see the appeal of it as a platoon game with esoteric and underpowered supports compared to more historical games of the era. So I'm glad I got this game of it in, cheers to Stu for putting on a great fun scenario. All of the miniatures and terrain are from his collection.

I couldn't make the club tonight, but who knows what will be in store in a fortnight?
Posted by Phyllion at 19:42 4 comments:

Over a month into this year's Fifth Analogue Hobbies Painting Challenge and there have been such treats on offer - the bumper crop of participants with around 250 entries so far.

I did n't manage to make a strong start - busyness at work hit the preparations (some of which I'm still working on), then Christmas sapped time away from the painting table. So I'm floundering in both side challenges with Curt and Juan.

My entries for December also firmly sat in my comfort zone - predominantly tidying up loose ends of the long-running Sudan project. But it'll be all change for January...

To get me out of the block on the first weekend, a small unit of skirmishing Sudanese Bazingers.

Bazingers were African irregulars, either mercenaries or slave-soldiers. They could be found in government service or the private employ of Arab slavers and merchants. They formed part of the garrison at Khartoum and Suakin and fought in Egyptian service at El Teb. They can also serve as the troops of local Shaykhs and warlords loyal (or not so loyal...) to the Egyptian government, provided with standard-issue Remingtons. 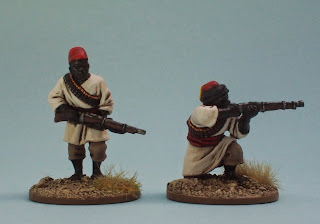 The colours are fairly uniform but the poses and motley equipment suggests they are irregulars, I think they'll sit well alongside my Egyptian regular troops. I wish I'd bought more and will likely add another pack and command. As always, they are Perry Miniatures. 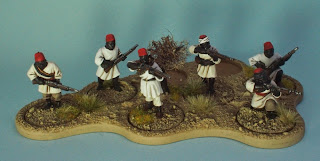 Next up, the second theme round: 'Mounts and Riders'. Nothing too imaginative , I already had the last three Baggara cavalry prepped up, so painted them to match my existing ones. 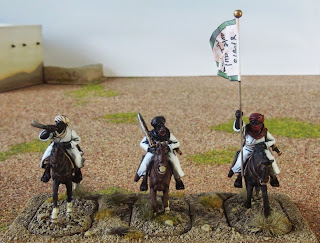 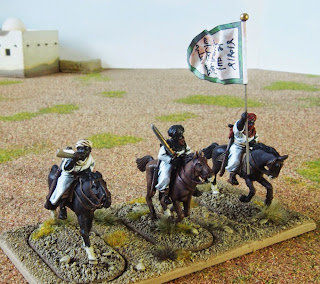 The glad is courtesy of Flag Dude (and is damned fragile - I've already broken it once! 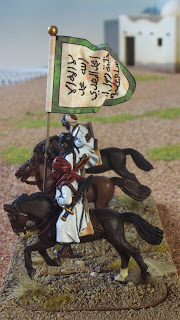 Here's the Mahdist cavalry wing - I should paint more camels to match it these fearsome horse! 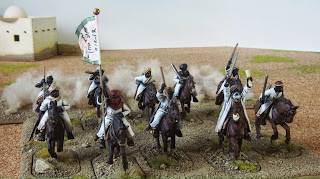 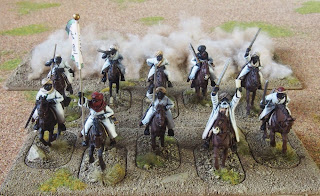 Next, a little dalliance with single miniatures, first a particularly flamboyant a Egyptian officer. He's a fantastic sculpt from Gringos 40s Maximillian Adventure range. I'm really pleased with how his face came out 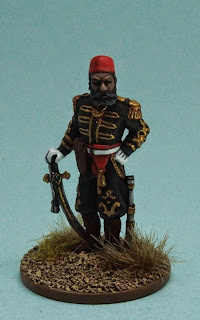 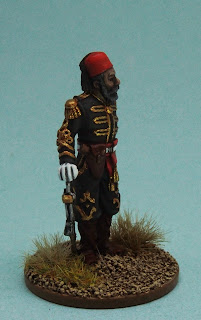 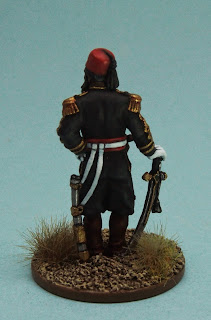 Last up, the Spanish Civil War onslaught begins. He was a freebie from Empress miniatures because my club put in a large joint order. In fact, the order was so big that eight of him were included! Happily, there is a 'priest' option in the Chain of Command SCW support lists, he can offer some religious zeal to my Requetes. 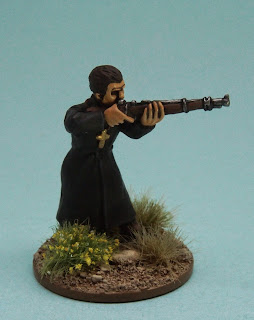 An entirely new project offer the chance to use new methods, many picked up from this community. I'm reducing my use of washes as I think they slow my painting down quite a bit and often aren't necessary - AP strong tone has become a bit ubiquitous recently. So only one wash used on him, though he was a very simple paint job. I've also used a new colour for the highlights on the base: Vallejo 'Iraqi Sand' rather than 'Buff' and added more variation to the shade. I think it looks much better, but I'd be very interested what you all think as he project develops.  Unfortunately, it won't match my terrain, but that's already in a motley collection of colours as I've changed my bases a few times for different projects. I also used more definition to the face and a slightly different flesh recipe, though this one didn't quite come out right. Further improvements have been made though. 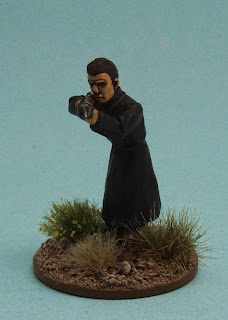 That's it for December, I currently sit at 181 points, a good way to my 500 target but 50 behind Juan. Do check out the Challenge blog for everyone's excellent entries, if you don't already!

In Search of Pea Green

It's time to start the Spanish Civil War project. First onto the painting table are a squad of Carabineros, dashing in their "Light Grey-Green...lighter than that of the Civil Guard; one source described it as “pea” green" (from Balagan).

My paint selection wasn't big on greens. Having bought Vallejo out of potential colours (a fairly limited range made difficult by needing to do it online), I find myself undecided  on the best combination - there's no clear shade and highlight combination that I can see. I'm undecided if I'm after a grey-green or just a pale green. My Googling has unearthed no colour plates, just the description above and a handful of painted examples. 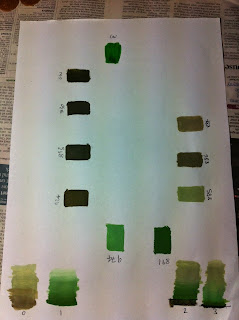 There is lots of a SCW knowledge no this community, so any sage advice for me from the options above?