Sharp Practice - Encounter in the Peninsula

Samulus came over for a game yesterday and I whipped out an old favourite of mine: 28mm Napoleonic Peninsular War using slightly modified Sharp Practice rules. I've built up a fair amount of terrain for rural Spain and could field British against Spanish, though the latter were intended as allies rather than antagonists. So I was making do without any French, and did have to knock up some cards for the activation deck.

As this was Samulus' first game, and my first of Sharp Practice for over a year, I kept it simple. A meeting engagement with small, balanced infantry forces. Each force had four units led by one Grade 3, one Grade 2 and two Grade one leaders. Of the units, one was  Light infantry, one 'Good' grade infantry and one 'Poor' infantry, though I shuffled around the leaders across each force. The objective was simple - small forces encounter each other in a rural region and to retain the field both aim to take and hold three defensible positions conveniently placed across the centre of the table.

Game start, and the colourful Spanish Blinds face off against the British in the opposite corner. The objectives were the farmhouse, church and walled wheat field. 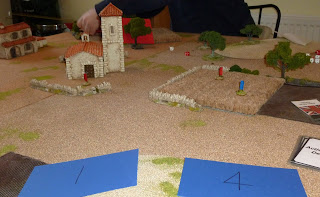 A couple of turns passed and I had rotten luck with the activation deck, with my Blinds activation only coming out once in three turns. This limited my movement and kept me in my starting corner while Samulus' Brits bounded across the table. On turn three, the Blinds were all spotted and the gloves came off. My infantry were exposed, with the well led, Good infantry in the centre took three volleys without getting chance to respond, leaving them in a bad way. The second unit safely made it to the wheatfield. 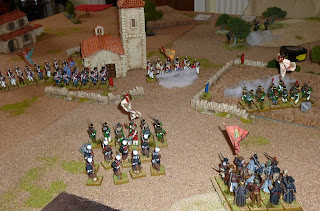 The British put out a withering fire, forcing back the battered line infantry, by now on the verge of quitting the field. The Spanish in the wheatfield fare much better so I chose to push the poor Militia unit into the field aswell to take advantage if the cover. Things aren't looking good for the Spanish. 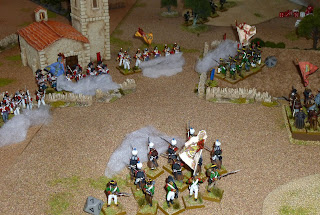 I managed to rally my Centre, while the Lights took shelter in the wooded terrain to their left. 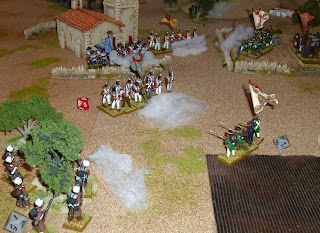 These exchanges continued, with the most notable and surprising even being a large unit of British infantry charging battered Spanish line, who managed to repel and break them. Superior quality and command and some luck with the dice was telling.


Meanwhile, the Militia finally make it to a position to put the 95th Rifles under fire. While they weren't that effective on the day, I do find Rifles can be  a pain, with a long range and accurate fire. 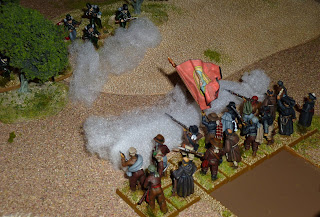 The Spanish centre eventually broke the British to their front and sent their greatcoated light infantry off in search of the third objective. But in their state they faced no real chance of shifting the fresh Highlanders who held the Church. The Line in the wheatfield were in an exchange of attrition, as were the Militia and Rifles. The balance had shifted.


The field at game end, turn 8. Each side holds one objective, the walled field for me, and the Church for the Brits, while the third is neglected by both. Each side has taken a roughly similar level of casualties and neither of us had any great prospects of shifting the other. A draw, it seems! 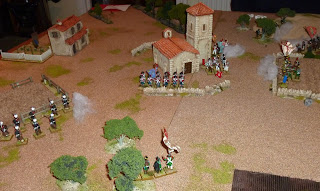 Once more, I enjoyed Sharp Practice. It had a nice level of complexity, with some attempt to model the fog of war using blinds and random activations. But it isn't too random, as units whose command card hasn't been drawn are able to take limited actions on the 'Tiffin' (or end turn card - bless the Lardies and their terminology). It does a perfectly good job of making a fun game with twists and turns, which feels right for the era and plays in two to two and a half hours.


As I packed down, Samulus and I discussed what scale of clash the game is representing: 1:1 or up to each unit representing a company or two. This triggered by the fact each unit is modelled with their Colours, which they obviously wouldn't be in a skirmish like this. I remain content with keeping such things undefined as long as the game is fun, feels right and looks good. And they do look good carrying their Colours, if I do say so myself.

Hopefully we'll get chance for another game soon, perhaps with some cavalry and artillery to mix things up.