Back to Napoleonics: 2nd Life Guards

So a few weeks ago that brother of mine Gharak (he of many hobbies) proudly declared he was going to clear his painting desk and get back to it, after many months of distraction. Much to my shock, he declared he would work on some Napoleonics. I was stunned (and sceptical, I must admit).

Well, I'm shuffling around projects at the moment, so it wasn't too much of a problem for me to dig out some prepped Napoleonics to match him. Its been a good nine months since I last did any, which was a nice break. And voila: the first batch of a new unit of British cavalry. 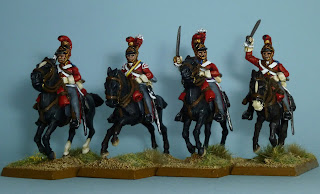 Yup, they are the creme de la creme of the British army: the Household Cavalry's 2nd Life Guards. Some Heavies to crush my brothers lighter Dragoons and Lancers. Let's hope he has a box of Cuirassiers hiding somewhere! 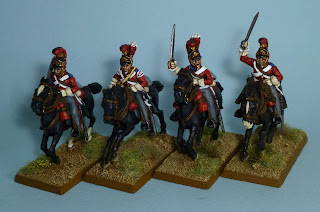 Ok, only four of them. They look a bit lonely, I should get cracking on batch two!

They are Perry metals. I found them much less frustrating to paint than my last Napoleonic cavalry, some Light Dragoons. Probably as I sprayed the troopers white separately from the black horses, so no white-ing out was required, unlike the piping, facings and straps of the balck-undercoated Dragoons. Awful job, that was. In comparison, these were finished off relatively quickly. I'm surprised actually, as I normally hate painting cavalry. 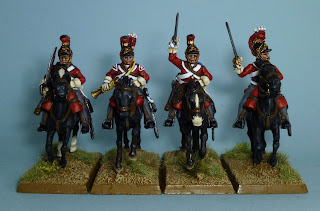 A note on Historical accuracy: both regiments of the Life Guards did serve in the Peninsula from 1812, though they spent many months in Lisbon on ceremonial duties. They saw some limited action at Vittoria and San Sebastian, neither of which being the sort of game I'm trying to recreate using Sharpe Practice. The large skirmishes are more suited to the scouting and harrying abilities of the lights! The Life Guards were shipped back to Britain from 1814. These Perrys are of course meant for the Waterloo campaign, so the uniforms might be a bit off, but my limited research hasn't highlighted any major changes.


On both service and uniforms I'm not so fussed, anyway, the models are too lovely for historical accuracy get in the way of me using them. You may also note the lack of tarletons on my Light Dragoons, also being Perrys meant for a few years later... As mentioned before, I'm a contented member of the 'what-if' club of historical gaming. 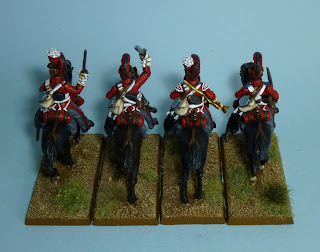 And Gharak? I queried his progress a week later. He had cleared the table, unpacked miniatures and paint...and promptly put them away again. Ah well bro, nearly there!

UPDATE: Gharak has finished a Napoleonic French unit this week, having seen the evidence I take it back!
Posted by Phyllion at 10:51