Highlanders for the Sudan: The Black Watch

The first five of my Black Watch for the Sudan are finished.

The Black Watch or a Royal Highlanders were among the first regiments to land at Suakin, deploying from Egypt in early 1884 and fought at the second battle of El Teb, as well as Tamai in 1884 and as part of the River column the following year, the less well-known part of the Khartoum relief expedition.  Their strength at El Teb was 750, more than twice the size of the KRRC.

My Sudan collection has what I'm calling a 'Heirarchy of Pose'c  The quality (usually British, but not
always, for instance the XIth Sudanese) troops are in firing line, where's the poor troops are marching. When I decided to get some highlanders for the British forces, I was originally going to do the Gordons or even the Camerons, the latter I could do in red jackets for the 1885 battle of Ginnis - the last time a British regiment wore red in combat. At the last moment, I changed my mind: while the Black Watch are a bit of a cliche'd favourite, but I just couldn't resist the dynamic charging poses over the firing line of the Gordon/Cameron sculpts:

Still, I can look forward to doing the Camerons later! Yay, more tartan (a more interesting tartan, at least).

It isn't event the first time I painted the Black Watch: here they are through the ages: 28mm Victrix Napoleonic painted a few years ago and 28m Perry Sudan. 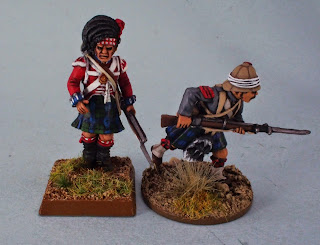 The tartan method is broadly the same but I made some refinements for the latest version - I think it works better and is more subtle, I toned down the green and didn't bother with the horizontal black lines through the colours - a devil to get neat considering the angles you're working at and they further complicate an eye strain-worthy pattern.

I wonder what the Mahdists thought when they saw loons dressed like this charging at them? 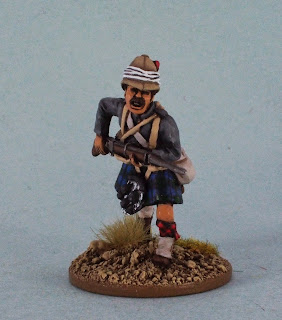