Humm, April. April was meant to have me bursting through the Spanish Civil War project to get some games of chain of Command at Wvvern: most of the club have their forces painted. That meant blitzing a section of Carlist Requetes and then onto some support choices. Then for May I'd be free to focus on some odds and ends for the Sudan to put on a game at the Club's Lardy day, "Operation Market Larden 3: A Bridge too Lard".

I suspect it will surprise few of you to learn that those timescales are slipping, but I do have some small progress to report. Frustratingly, I haven't been able to source a colour that I'm happy with for the Carlists' beige shirts (vallejo recommendations warmly welcomed). I would have used the old GW favourite Khemri Brown as a base, but as it's discontinued and a fairly key colour for the Sudan project, I'm rationing it to essential uses only.

Still, a couple of the Empress Carlists aren't wearing shirts, like this chap in a natty jacket. 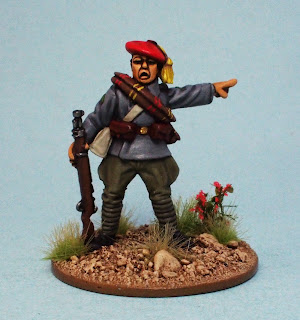 I settled on grey, which is so 1936, using the gent on the right as inspiration: 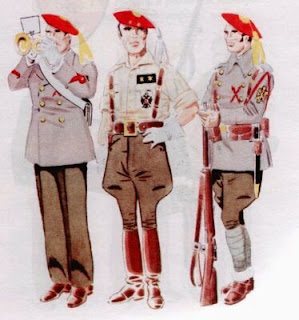 I'm also led to understand that the Requetes wore colourful civilian blanket rolls over their shoulders. Further damage to my hopes of a quick job, so I went the whole hog with this stripey number. 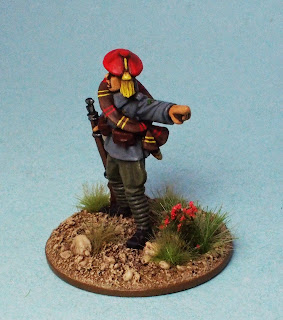 I've also decided to put more effort into my unit markings - something I rarely bother with. But this has turned into a bit of a showcase project for me and as I'm trying to develop my painting, it feels like these touches are worth it. On the downside, they add more free handing (I need to practice, these took a fair while) to each mini. So this Sargento has his green chevron on his sleeves, which is appropriate according to Balagan. I won't fully mark them up, it'll depend the sculpts and me being able to decipher source material on how they should look. 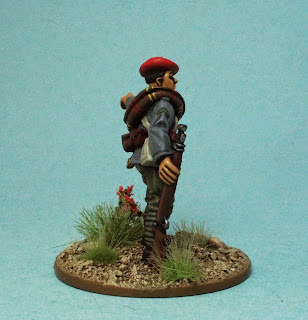 Next up was this chap in a more traditional uniform. So a bit of googling around to figure out what colour I'm after for the  Nationalist uniform: 'greenish tinged khaki', apparently, but I this seems to manifest in many shade in people's collections. Spain-based Miniarons kindly offer the painting guide from the back of their sets on their website gave a vallejo shade: 70.822 US Uniform. 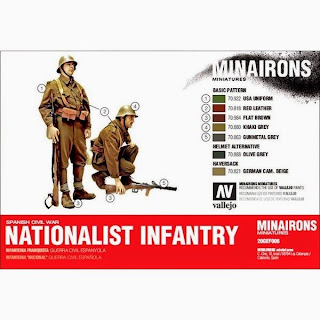 Duly used, but even used as e highlight, it appears to be rather less 'greenish tinged khaki' and more...green. It looks a bit brighter in real life too. Hummmm. 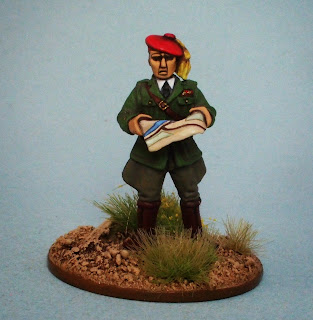 I like it, but it doesn't seem right (or is it?!) for when I move onto the Nationalist infantry on the prep table. Once again, thoughts of those more steeped in SCW and with better reference material would be very helpful. 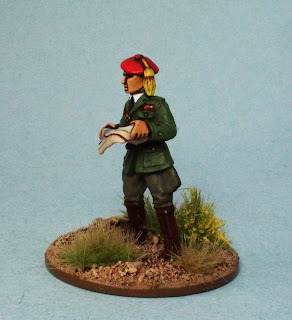 On the rank markings, may be able to see his two stars (ahem blobs) on his sleeves and 'galetta' on his left breast, ranking him as a 'Teniete'. And what else should a Teniete be doing but scrutinising the lay of the land? 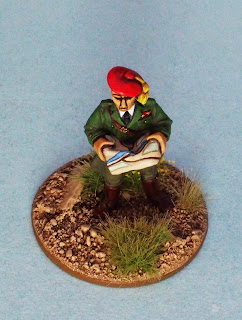 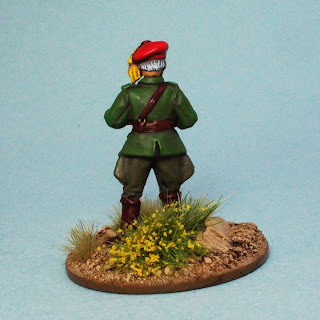 All in all, pretty chuffed with how these two Empress sculpts have come out. But that's just two of 24 done and I've still not got a colour for the uniform of the rest!
Posted by Phyllion at 22:24