No, not new output, rather a belated post as I didn't get around to posting the miniatures I finished up for the gaming day at Wyvern. It was such a rush I just didn't get time to snap them before they were packed up with the rest of the troops. Well, a month later here they are, though I warn you that you've seen the likes of them all before. First up are more horsemen of the Baggara tribe, including a Sheikh to lead them. I replaced the Perry spears with wire ones - the Perry ones bend so much it drives me up the wall. These don't bend, but will ping off if you catch them at the right angle, whatever glue I use. Some to be packed carefully. 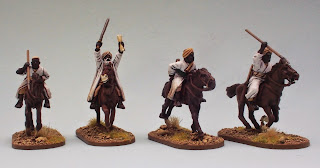 Next up a load more infantry. A few each of warriors and riflemen. This does make my force even more rifle-heavy, over 25%, which I should rectify at some point. But not for a while - other projects beckon!

The Anglo-Egyptian force also got a little love - just a handful of troops I have prepped to round three units up to an even number. Not an efficient way of doing things, but I didn't have time to finish more. 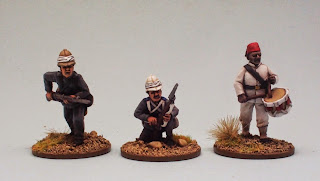 Thanks to all the kind words on my last post. I've not really pushed past the malaise yet, but have started to dabble a little more: finishing up odds and sods and digging the 15mm WWII back out to get sprayed up. Little steps but in a way it is nice to just meander.
Posted by Phyllion at 13:53