I haven't posted much recently because I've been frantically painting bits and pieces to play some Pulp Alley with Gharak over the weekend. I'm providing the terrain, specifically a middle eastern town/market. I've pretty ch finished that and should have some photos up of it in game over the weekend.

Today I've these civilians, good townspeople I thought. A couple of diggers (also useful for the Indiana Jones-inspired archaeological dig scene I would love to build!), a stall holder and two modestly dressed ladies. I think the green-robed stallholder and older digger leaning on his spade came out particularly well. I was running around Late at Salute looking for reasonable priced Muslim civilians. I totally forgot to give the Perry range a good going over and later remembered they did a Crusades range and lo and behold: civilians! The sixth from the pack didn't quite get finished.

I also finished the Constabulary with their second detective, who seems to be going for a role in Miami Vice. The league is now all painted and should get a run out over the next few days. 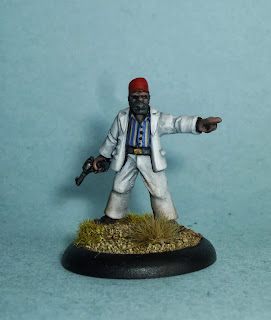 As if I didn't have enough to do, I've also found time to do some of that most hated of hobby jobs: rebasing. After finishing these Bashi Bazouk cavalry, I decided I wanted my Sudan cavalry to be on pill bases rather than rectangular and I'll mount them in Warbases trays. These were re-based almost without damage, but my Beja Camelry need more touching up. 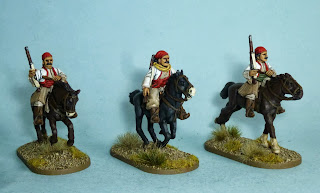