Quick post tonight to note a great first game of Operation Squad with Samulus. We took reduced squads, me with 8 (freshly painted!) German infantry and Samulus with 8 British commandos.

It was a game of two halves, the right half of the table ending up a troops hunkered down in cover sniping at each other. Perhaps my fault for not putting more blocking terrain down. The centre was dominated by two buildings and I managed to get a well-positioned MG34 to keep a large building full of Brits suppressed. Well, cowering at the number of shots I could throw out, at least! 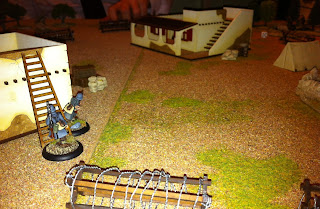 MG34 team heads for the rooftop 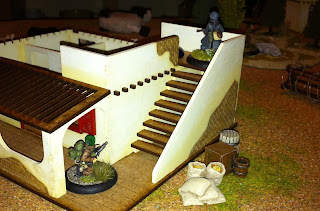 The game ebbed and flowed well and before we realised it was late enough and our forces were dwindling and routing, so agreed it was a draw. 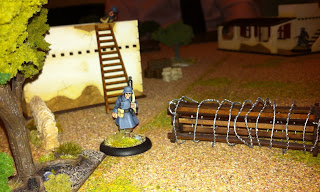 Disaster! MG gunner fails his break test and leaves the field. It was a still a draw despite this setback, honest!

I really enjoyed Operation Squad. The action/reaction mechanics initially needed the application of braincells, but flowed better after a turn or two. The game encourages you to use squad tactics and have your troops work together.

Pros
-designed to encourage squad tactics, captures the feel very, very well.
-elegant mechanics, the way MGs worked we thought was quite excellent.
-makes for a tense game, some dice rolls really matter, which is fun!
-I think the core mechanics would work well for Weird WWII, with tinkering and adding some different flavours of troops, without breaking the core mechanics.

Cons
-requires both players to pay attention or it can go quite slowly
-some scenarios not explicitly covered by the rules
-restricted squad lists (easily solved by the application of imagination and scenario design!)
-long ranges require a lot of terrain, echoes of my Infinity days here
-uses quite a few counters, unless you've got a good memory!

So after one game, my feeling is definitely very positive and I look forward to trying new things out like mortars and Panzerfausts. If you're aftet a pick up and play, small scale squad action game, I'd recommend it!

Now, can I justify some more suitable 4Ground buildings?
Posted by Phyllion at 23:09