First up, apologies that all of my posts are challenge entries, I don't seem to have so much time to blog at the moment. This was my last entry, 10 days ago. I've nearing another entry, but it is achingly slow. I've also been trying to do some woodland/rough terrain, which I've just finished but won't score. 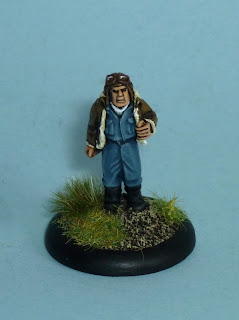 This pilot is a great dual-purpose miniature, he will join my Pulp crew as a pilot, once again the last adventure required one but we were short. He would also be a good objective for small-scale WWII games.

I thought some German efficiency would get my Challenge back on track. I'm still well below par as we approach the third-way point, but this bunch of points should help. All of these were part of my Christmas gift from Gharak and are from Artizan Designs. 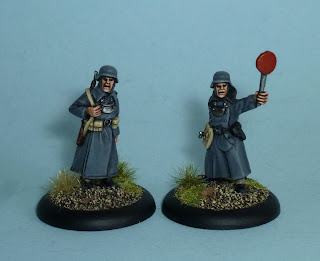 Nine Greatcoated Germans, a two-man checkpoints and a seven-man part-squad. I've nine more to paint, almost certainly on the workbench soon. They are a rag-tag bunch, some late war armed with G43 rifles, others bolt-action and supported by an MG34. So I echoed this with the painting, mixing up the colours to give the impression of a hard-bitten unit. I spent a while trying to get my colours right, but couldn't find a definitive on the greatcoats - flat grey or the more greeny 'feldgrau'. I eventually settled on two colours of greatcoats, to represent different batches, shortages or fading through wear. I'll add one or two more shades with the second batch.

Once I've painted the second group, I'll spend some time dirtying them up before the final coat f Dullcote. Neat at the greatcoats came out, I think some grubbiness will really suit them. I'll post up pics once that's done.

These will oppose my British Commandos, originally I thought I'd use Brink of Battle, but I've just picked up Operation Squad, having heard good things about it. I'll be giving it a try with Samulus tonight.