The first reveal (didn't take long...) is that the Secret Project will probably use the Brink of Battle skirmish ruleset. The idea of a ruleset which covers any era while retaining some flavour of each is intriguing. A concept which Gharak has considered before and I've shown healthy scepticism about. But I'm happy to try these things.

So, to test the rules I dug out the below miniatures and terrain to give BoB a try with Samulus. This is not the secret project! It's just something I threw together with the miniatures and terrain on hand. A British Commando raid (Me) against either another short-lived Indian mutiny (Samulus), or perhaps some post-WWII war games! Set somewhere suspiciously like Spain, using the terrain I've built up for Napoleonics. Humm, pity I had no Germans to hand really. 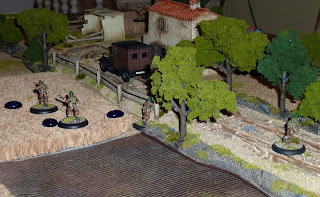 The Commandos advance through the rough rural terrain (Blue tokens denote ambush, where concealed miniatures in can't be attacked from a distance) 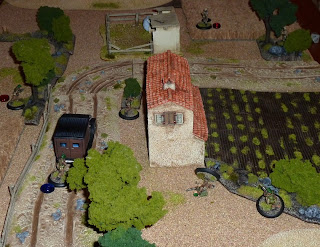 The forces (six commandos against eight Sikh infantry, with a variety of weapons and profiles on each side) hunker down in cover and trade shots. (Red tokens are for assigned orders which haven't been used yet). 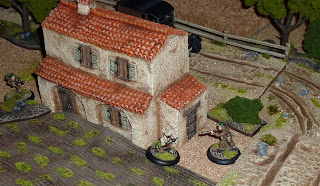 Surprise! Late in the day, in a desperate push for victory, a Commando rounds the corner to face off against a Sikh veteran.

Game end came shortly after, with two surviving commandos melting away, having inflicted four casualties on their opponents. I suspect my aggressive tactics and bold moves (to test the rules for grenades and combat, honest!) were to blame for my defeat.

And what did I think of BoB? Perfectly serviceable actually, I like the alternating orders system, and Break (interrupt) and Edge (initiative) mechanics well enough. You need to keep on your toes as there are a lot of opposed rolls, but I'm used to that having played Infinity. Combat worked fine, though it produces quite a lot of variation given it is opposed roll with a D10 plus stat and modifiers. I am tempted to try more variety in the profiles next time, but they are pretty easy and quick to cost up once you've got a handle on the skills.

And my one gripe? No quick reference sheet and no sample or blank profiles. I had to spend an hour or so knocking a template up on the computer, including weapon profiles for each force. Made things easier as I could et the profiles neat and easy to review in-ame, but as I say, it would probably take 30 minutes to an hour to do it with each new force.

I think it will work nicely, you do lose some flavour but the rules are perfectly fun and run quickly once you've played a few turns. I should be able to write a range of scenarios which will work with the system and vary the game length by scenario as well as the force sizes.
Posted by Phyllion at 21:20