The summer has brought quite a few visits to Wyvern Wargamers to push the lead around. Way back in July, Stu put on the latest of his 'Adventures of Claude Canard of the French Sloop "Le Vendeen"' our hero adventuring in Egypt against the Ottoman menace. Stu's fuller AAR can be found here, in Lardy tradition, we used Sharp Practice.

Our hero Claude Canard finds himself separated from the main column and pursued across the desert by the blasted Ottomans. Spying a village on the horizon, the French column is urged to reach it before the cavalry bear down on them. 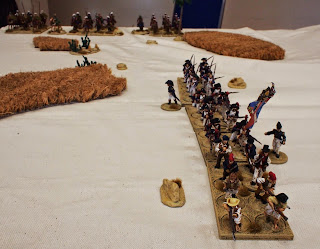 The advance party enter the market - safety at last? 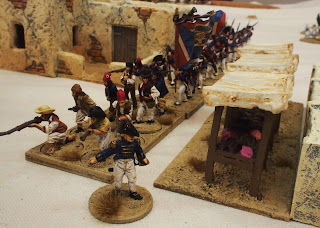 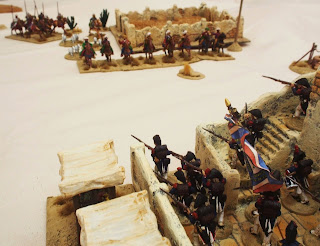 The Ottoman cavalry circle warily at the edge of the French range. Upon taking an optimistic volley, the French infantry realise that their powder is damn (in a desert? Really?!) 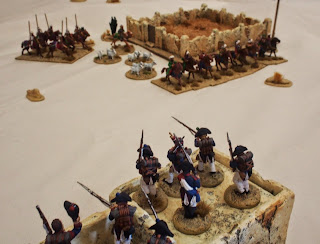 Seizing their chance, Ottoman riders plough into an alleyway to attack the French sailors.... 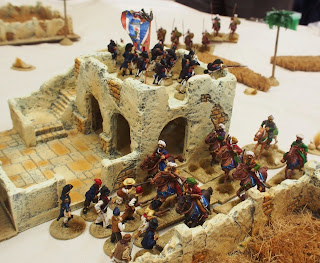 ...while their counterparts attempt to cut off any escape 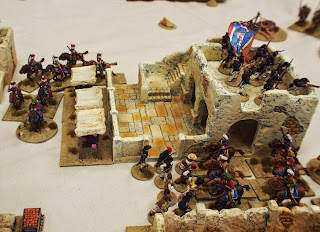 The battered sailors slip around the corner and form a ragged defensive line for the second assault. Meanwhile, the French infantry search in vain for fresh powder. 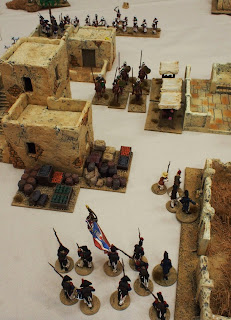 The game ended with the Ottoman cavalry repulsed in the market square, through some good fortune on the part of Claude Canard. The Ottomans had a mountain to climb once the French made it to the safety of the town and weren't able to bring their infantry to bear. A minor victory for our heroes!

Cheers to Stu, Dane and Paul for a very enjoyable game, once again Sharp Practice gave good service. I do like the asymmetric forces of Stu's Napoleon in Egypt project.


And a couple of weeks ago, Stu put on another game, this time using his modern Africa project that he's been churning off the workbench. Pitting the dastardly petrocorp mercenaries against the local militias for control of a key road through the 'Zikanga' jungle. We used a Two Hour Wargames ruleset, Stu's writeup is here.

The mercs' advance party creeps through the thick foliage, stumbling across militia sentries. Unfortunately, they were alert and manage push the mercs back. 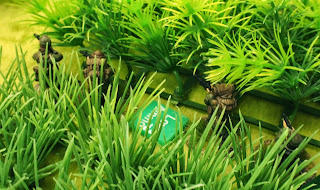 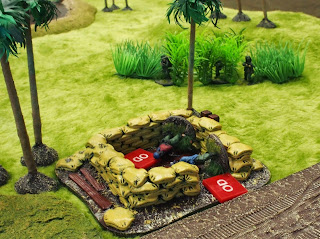 And before the militiamen can react, they are also put down by precise fire 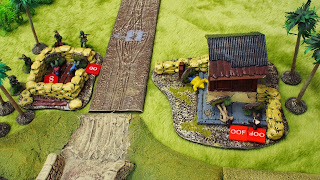 As the professional heads to check the bodies, the cowering survivor (in his most fashionable yellow hoodie) pops up and blasts away with his dual handguns (wielded side on, no doubt). Despite his training, the pro is shot in the head and instantly killed. 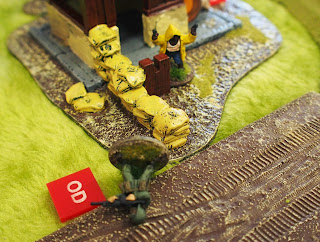 Hearing the commotion , the militia in a nearby village start their technicals and pile down to defend the bridge. 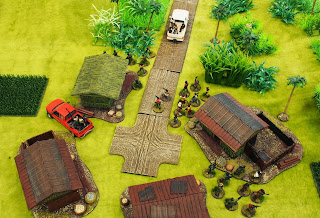 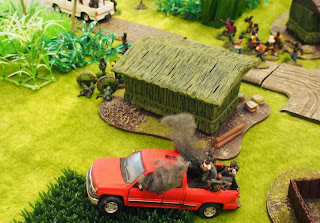 The fighting rages, with the mercs consolidating a hold on the bridge while the militia push Charlie team back to evacuate their wounded to the bridge. This enables the junction to be seized - can e mercs break through? 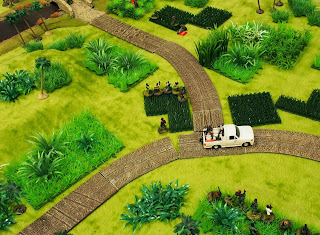 Err, no. Casualties mount on both sides but neither is able to claim a further advantage. Despite their training, the mercs couldn't open the road - the militia were too numerous and able to organise themselves. 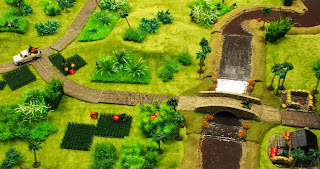 I've mentioned before that THW aren't my favourite ruleset, I find them hard to remember and can't get my head around the high/low dice. But I can see that they give a good modern era simulation and of course, Stu's modern Africa project looks awesome anyway. Cheers again Stu!