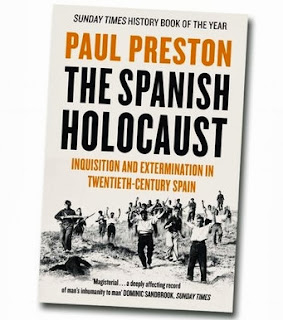 I picked up this book on a whim and with a money-off voucher while mooching about the tiny history section of the WHSmith in the soul-sapping Westfield shopping centre. Before I start my review, let me be clear what I was looking for, as it affects my thoughts on the book. I was after a decent introduction to the Spanish Civil War as a whole, covering the political, military and social aspects of the conflict. When I picked the book up, I knew little beyond the Curt of Analogue Hobbies' wonderful miniatures, AARs and intelligent posts on the subject. 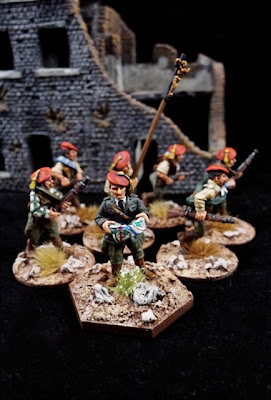 A group of Curt's fine Carlist Requetes, used with permission

The cover includes many encouraging plaudits and quotes, with it having won Sunday Times history book of the year. Finding it in the pitiful historical section in a high street shop, I mistakenly assumed this book would be what I as after. I was quite wrong!

As the title suggests rather more obviously that I had realised, this work of 700 pages is a comprehensive review of the repression of POWs, political figures and innocent civilians by both the right-wing Francoist military rebels and the Republican regime of predominantly Unionist, Communist and Anarchist organisations. The author clearly wants to set the record straight on which regime was more repressive, using statistics to prove, seemingly beyond doubt, that the Rebels were more repressive by an average of three times the number of individuals murdered. The author calls the repression the 'Spanish Holocaust', his own term and an emotive one that he carefully justifies in the prologue. This is organised by locale and by region and presents statistics based on the latest research available to modern historians. 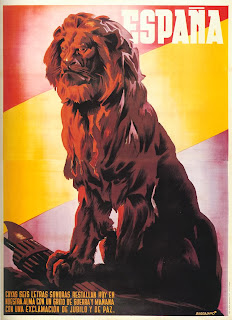 The book makes clear that repression in rebel-controlled zones was planned, a staggering strategy of extermination, despite the Francoists' propaganda claims that they were only responding to incidents of 'red terror' and that they used appropriate legal processes. The claims of 'red terror' were outrageous propaganda based on exaggeration of real events and outright invention and claims to use legal processes were clearly an outright and deeply hypocritical lie to generate support for their cause. The disturbing litany of Rebel atrocities was helped by happening in remote areas, far from neutral observers, which in turn helped Franco obtain/retain the support of more of the international community, Spanish elite and Catholic Church.

In comparison, while there were atrocities in the Republican zone, these are presented as mostly being in response to Rebel actions such as bombing raids on civilians, being encouraged by agents provocateurs and and not being centrally coordinated. In fact the author documents the many attempts to prevent atrocities by individuals and the Republican government. With its revisionist aims, the book goes to great lengths to attribute responsibility to individuals or organisations for particular atrocities on both sides, wherever possible, generally having more success in the Republican zone due to the superior records of the crumbling state (despite some clumsy attempts by the Madrid Junta to conceal later atrocities) and the larger number of international diplomatic and non-governmental observers. 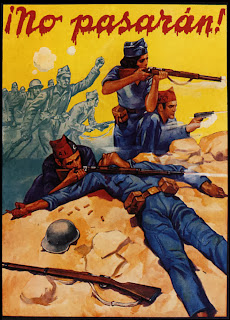 Another propaganda poster, courtesy of ALBA

The structure of the book detailing repression region by region lends itself to a repetitive feel, presenting the Republican repression before the Rebel advance, then the much greater, planned and brutal Rebel repression, before singling out a few, usually two or three, examples which are notable for the profile of the victims or the scale or brutality of the atrocity. I found the most interesting chapters were later in, particularly chapters 9-11 (of 13) on the atmosphere and events in Madrid in the year before the end of the war and the sections on foreign support for each side, particularly Nazi Germany's material contribution and its hunt for German exiles, as well as the Soviet Union's illicit activities in Madrid and Barcelona to hunt and eliminate 'Trotskyists'.

The book is clearly written for people with a solid grounding in the subject. The progress of the war and specifics of the Rebel and Republican forces are barely covered beyond generalities, for example the Battle of the Ebro is referenced, but never expanded upon. There are a colossal number of individuals mentioned and they are given the briefest introduction so I found it hard to make sense of who was important and who wasn't in the wider context of the military and political conflict. Some are referenced again many pages after first being introduced, with only the briefest of memory jogging. The turbulent events meant there were scores of acronyms for organisations on both sides, as well as the authors' use of many Spanish terms like 'sacas' (seizure and extrajudicial killing) and 'checas' (informal police forces and detention centres) throughout. There is a glossary at the back but the author could at times have made it easier for an unfamiliar reader: I found the term 'fifth column' and 'fifth columnist' first used many pages before it was described what the term meant. This all adds to the sne the book is quite specialised, but despite a few niggles, that I was able to follow the narrative fairly well is testament to the quality of the writing. 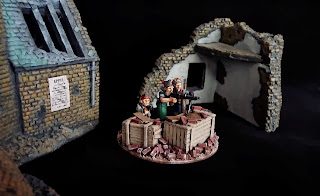 The book seems to close quite suddenly, whisking through the ongoing repression in the years immediately afterwards and fate of those who had fled to France after its all to Germany in the Second World War. The coverage of repression throughout the rest of the Franco regime was in a similar format: statistics and case studies, but seems very brief, which is a little jarring compared to the heavy detail in earlier chapters. The final chapter, 'The Reverberations', covers the re-writing of history by the Francoist regime and national movement for the recovery of historical memory' from the early 2000s and some reaction to this. the chapter also covers some examples of the guilt of the oppressors, tracing ten or so case studies, including some occasions where perpetrators apparently get their 'comeuppance'. But there is little significant effort to draw conclusions on the effect of the repression on modern Spain, which I had expected given the apparent expertise of the author.

One of my comments was going to be the lack of a map of Spain, as the stats are broken down by both town and region and my knowledge of Spanish geography isn't good enough to make sense of the progress of the war and repression. But about halfway through, I found a series of maps and graphical summaries of the repression in each region described in the text, both in an Appendix nestled between the substantial Notes and equally substantial Index. I would have preferred the maps in a more obvious place at the start of the text. While the book contains two eight-page sections of black and white images, these cover a faction of what the text covers and were difficult to contextualise, not being referenced in the text and often appearing many pages from where the individuals/organisations are first described.

Pablo Picasso's work Guernica, created in response to the aerial bombing of the town of Guernica in April 1937, image courtesy of Wikipedia

In conclusion, I wouldn't be able to recommend this book to someone in my position: new to the field and looking for an overarching introduction to the military, political and social conflict. It certainly is not (and does not claim to be) a general history of the war. Understandably, its focus on the brutal repression offers little 'wargaming potential'. That is not to say I didn't get anything from the book: I found it powerful and deeply disturbing and learned a colossal amount about its subject matter. Even in my inexpert view, it is clear that this is a meticulously resourced work from an British historian who is clearly an expert in the field. It is more of an academic work, providing the statistics of the repression as best can be accounted and based on the work of many historians, all drawn together into one coherent book. To present such challenging material in such detail yet remain accessible is extremely impressive. The quality of the referencing is exceptionally strong as of 700 pages, 530 cover the text and a substantial 170 covering a glossary, notes, appendix and index. The author naturally draws heavily on Spanish source material, including many first-hand accounts and the work of modern Spanish historians.

I greatly respect the book as a modern history and attempt to set the record straight through clear presentation of facts, statistics and assessments, based on meticulous research. For those with a reasonable grounding in the conflict and who are looking to learn more about the repression of the conflict, or students of early 20th century history and fascism, it would appear to me to be an essential work, particularly for English-speakers, drawing as it does on so much original Spanish-language material.