The second of our Pulp Alley trial games from last month, once again dual posted with Gharak's blog. Once again, words by Gharak, photos by me.

First, a belated group shot of the our fine French adventurers. 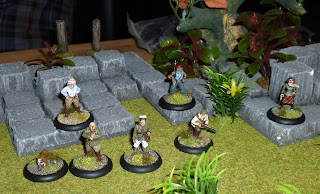 Butch Sullivan and the Lost Idol

Our fortune hunters find themselves in French Indo-china, Butch and his party have been hired by a local elder to recover a ceremonial statue from deep in the jungle. After many days hacking through the bush, Butch and co are nearing the resting place for the revered idol. Two local guides with Butch have followed a trail of old clues to this point, they however have reported of another group of foreigners in the area who appear to be looking for the same statue.

Captain Jerome LeFranc has been summoned by the local regional Governor to ensure that the dastardly Americans do not remove the idol from the country.

Our heroes must follow a train of clues to discover the statue, tracks in the ground, the stolen baggage and there is rumour missing hostages, whose knowledge could be invaluable.

Butch and his crew make the first move, splitting their group Butch heads off with Indiana, whilst Lauren and Kazim follow the two local scouts. 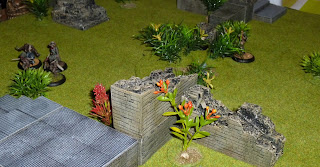 Meanwhile the French group move up, heading towards the missing hostage. 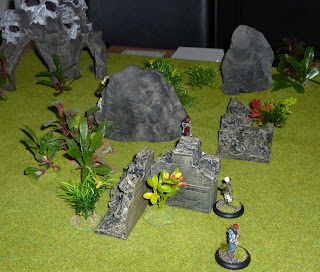 Andriy struggles through the thick jungle leading the pack but the effort seems too much and he becomes tangled in vines, injuring himself as he pushes through the think and perilous jungle.

But his struggle was not in vain as he stumbles into one of the hostages, who appears to have knowledge of some papers which were stolen in the raid against the baggage train, the chest of documents included several cryptic papers on the legends of the area. 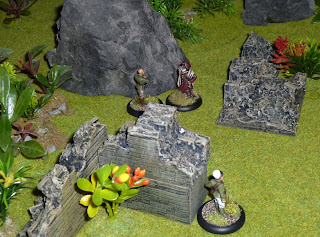 Dashing forwards, Jerome investigates the lost baggage train, whose mules are not impressed with the disturbance and lash out. The French captain dodges the flailing hooves as he moves to calm the beasts. Stashed in the equipment is a journal detailing an ivory skull carved with texts describing the now abandoned temple where the Statue was housed. Perhaps it may also detail its fate. 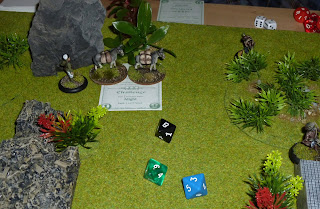 Before he can read further, Kazim rushes Jerome, knives drawn. He almost takes a tumble but manages to regain his footing before going toe to toe with the ex-Foreign Legionnaire. 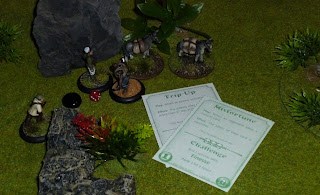 Not so far away the Andriy's less than fearless hound scampers away, daunted by the size and power of Indiana. 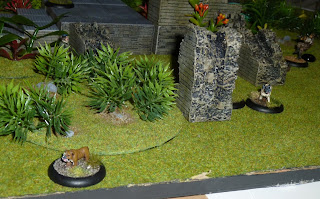 In the centre of the old temple complex one of the local guides let's loose a hail of arrows and wounds old Gerard.

Lauren moves up to a vantage point to help out but once again appears to be out of ammo. 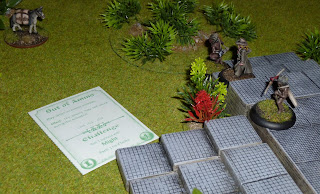 Gustav charges towards the local to avenge his fallen comrade, whilst in the background Jerome and Kazim continue to trade blows. 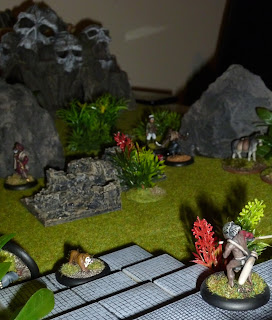 Gustav might hve more luck with the puny archer

Andriy investigates the loosely concealed chest, triggering a trap. His reflexes fail him and darts shoot out, lacerating his hands and face. Unperturbed, he opens the chest and draws out the Ivory Skull, reading the ancient inscription. Andriy has discovered the whereabouts of the missing statue and realises he needs to retrace his steps to locate it. 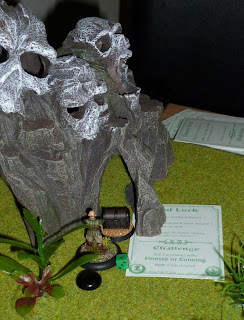 Fancy that, a clue hidden at skull mountain (it is Pulp, after all!) 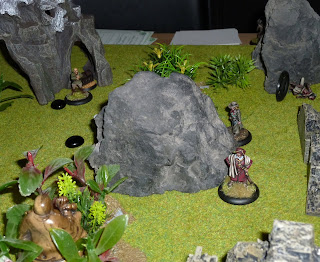 The race is on to get to the giant statue first, but the Captain sprints ahead of Butch and Lauren to secure the prize and Butch's crew slink off. The Governor will be pleased and Jerome hopes the reward will cover the trouble. 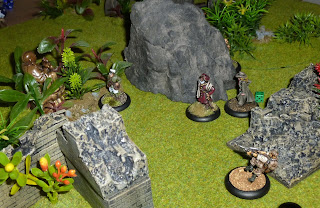 All in all, another fun game of Pulp Alley, the cards drive the scenario and to an extent, the characters (Lauren's ever-empty pistols). The scenario didn't quite work as I was able to fiddle the trail by putting the final clue behind my characters, hugely increasing my chance of getting it. Using the recommended 3' by 3' board rather than 2' by 4' would help avoid that and it didn't really detract from the fun.