I'll start with a Pie chart. Unfortunately it doesn't illustrate anything except that I'm balancing limited hobby time across a number of projects. But I do like pie charts (and it adds a splash of colour to what could have been a long rambling post). 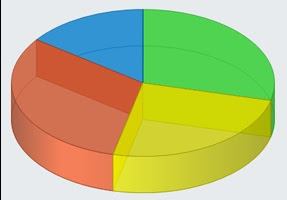 1). 28mm Napoleonics
Definitely in a consolidation phase. After two years I've a fair amount painted up and while I do have plenty more minis and terrain to paint up I intend to take a break from the most of it. I will get the Colours sorted on all of my painted units before setting it aside completely. I think next year Gharak and I will come back to gaming Napoleonics and I'll be enthused to pick up the brushes again.

2). 28mm Vikings for Saga
Six point force painted, one point left to finish. In an ideal world I'd buy one more unit of Bondi as an eighth point for maximum flexibility. But I can always add that later, for now I'm content that it is mostly finished and is something I might actually get a game of every now and then with people who aren't Gharak.

3). 28mm Pulp
This will rumble on (especially as Gharak and I are mid-adventure). After my early 2012 drive we've plenty of encounters to play with perhaps just the odd extra miniature required. As a varied project means it is great to drop Pulp figures into a separate painting project to mix things up a little. It also doesn't need much buying for it at the moment. Happily it will get gamed again this year: we need at least one more session this summer to get our heroes out of their current pickle!

4). 10mm WWII British
Was finished (!) as a platoon plus support, then I picked up a few more bits at Salute but they should be quick to paint up. I'm in a bit of a quandary with rules, but those purchases should give me a small Blitzkrieg Commander-sized force. At some point I'll buy BKC and twist Gharak's arm into a game or two or grab a game in my local area.

5). New project 1: 28mm Greek Mythology
Gharak is in the driving seat for this one, creating a complete skirmish game with fluff, rules and sometime down the road it's own miniature range. Ambitious as always, my brother. The game will be a skirmish scale with suitably heroic combat, set in an alternate world taking its inspiration from Greek Mythology. And my role? A mix of advisor, rules collaborator, playtester, painter and who knows what else! We're working on test forces for each faction, so I've the start of a Minoan force on my paint table, Minotaur and all.

6). New project 2: 15mm SciFi
While I didn't really need a new scale (or a new project right now!), I've been tempted to dabble in 15mm SciFi by Samulus. I've an order in with Ground Zero Games for a platoon of infantry and I'll grab my pick of cool vehicles and air support to face his Autosentia. Ive set on a colour scheme and written some fluff for my faction, which was a fun way to spend an hour. Again, not set on any rules as yet, but 15mm seems popular for SciFi, so I've no doubt we'll find something fun.

7). Resurrected project: 28mm Wild West
One on the horizon, after backing Blackwater Gulch with 20 of my hard-earned pounds. Resurrected because a few years back Gharak and I bought a bunch of cowboys and Legends of the Old West. Gharak built some terrain and I got some erm...half-built. We played a few games and set it aside. Once BG is released in the autumn I'll paint some cowboys and finish my terrain.

In summary, seven projects, four of them current. Eep, plenty to be getting on with...
Posted by Phyllion at 18:02