Rise of the Thuggee

It is time to game some Pulp adventures in India - you may assume (correctly) that I've been watching Indiana Jones and the Temple of Doom. Setting it in India opens up a wealth of possibilities: Elephants! Secret Cults! Sacred treasure! Tigers! What more could an adventuring archaeologist ask for?

I needed to finish these Pulp Figures Thuggee Stranglers last night as they are a birthday gift for my brother. He insisted I match the colour scheme from Indy, demanding bugger ;-) Ok, the clothing is totally different but I think they came out pretty well. I'm particularly pleased with my matching the red swishes on the turbans. Lovely clean castings as always from Pulp Figures.

I regret not getting the Thuggee with Martini Rifles too. Ah well, something to order next time.

For the historically inclined among you, a short explanation of the Thuggee (thanks Wikipedia):
Thuggee (also known as tuggee or simply thugs) was a religious cult and an organized gang of professional assassins who traveled in groups across India for several hundred years. They were first mentioned in the Ẓiyāʾ-ud-Dīn Baranī (English: History of Fīrūz Shāh) dated around 1356. In the 1830s they were targeted by William Bentinck, along with his chief captain William Henry Sleeman, for eradication. They were seemingly destroyed by this effort.

The Thuggee would join travellers and gain their confidence. This would allow them to then surprise and strangle them by tossing a handkerchief or noose around their necks. The killings were performed in honour of the goddess Kali and were very ritualistic. They would then rob the bodies of valuables and bury them.

And that is the etymology of the word 'thug'! In our 1930s Pulp storyline, our adventurers will discover the Thuggee on the rise after their so-called 'eradication'....

In a brief disinterest in everything else I had prepped, I turned my attention to this chap. He will be the muscle for the Societe Archaeologique, which I've started as a rival NPC group for Pulp games. He is a West Wind French Partizan - check out that beret and neckerchief combo! 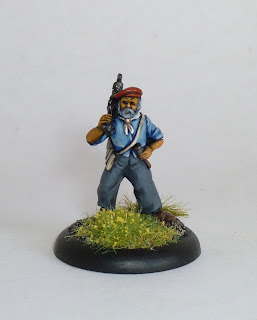