Well, it was going to be one or two things this week, and the quicker job won out in the end. Nothing to do with the steady flow of packages that have been arriving with fresh goodies to prep!

Here we have my Command stand. Part of the pack from Khurasan's Nova Respublic range. I couldn't resist a commander in a massive hat and shiny medals - I used to play 40K Mordian Iron Guard! The blue uniforms came out quite nicely to match the much more armoured GZG troops which are the bulk of my infantry. I might go back and add some piping to detail the tunics more - or would this be fiddly overkill? 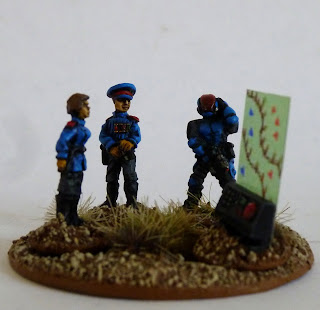 This pic was taken without flash - I find it can make the blue look far too electric.

I thought they made a nice diorama - the Commander reviewing a holo-map with his ADC to attention, while his platoon leader radios out commands. I borrowed the idea for the round base from some Napoleonic forces I've seen on Blogger - I think that it sets them apart nicely.

This time with flash, including the Platoon Medic (the same Khurasan pack) and a squad I finished at the same time (GZG). The two mix well and the lovely Khurasan ranges give me plenty of options for future expansion.
Posted by Phyllion at 20:04