I don't normally post WIPs, but was quite pleased by a recent afternoon spent hacking up the plastic Perry Mahdists. They're not quite finished and need some green stuff before priming, so are unlikely to roll off the painting queue for a couple of months.

First up, a chap manfully hurling his spear and one tweaked To be drawing his sword on the charge. The latter was damned fiddly, cue lots of teeth gnashing. 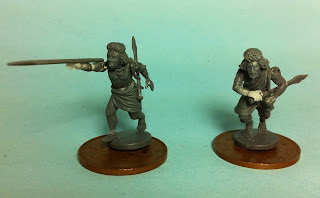 Next up, some tweaked command, simple hand swaps to add variety. The pole is loose and will be replaced by a Flag Dude banner in due course. 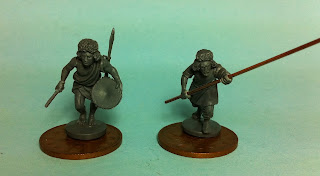 And finally a couple of casualties from the Anglo-Egyptian volleys. The one of the left came out particularly well with arm across his body and sword slipping from his grasp. The other didn't quite work so well. I've not decided whether to mix these into units for variety or start making casualty markers for my whole collection. 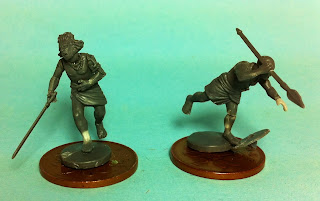 Great as the box is for making a large horde of Mahdists, I have found the of contents quite restrictive in post. But I do like converting plastics and finding fun uses for bits from a range of sources. I hope to knock a few more up before the Challenge begins.

I also made the trip to Wyvern Wargamers last weekend for a Russo-Japanese War game using the Lardies' 'Through the Mud and the Blood' rules. Hosted by Stu, we used his beautifully painted collection of miniatures. It was a well crafted scenario and a real hoot of a game, with the Japanese forces tasked with securing a bridgehead across a river by game end. Stu may well post fuller writeup on his blog, but I took a few snaps myself.

Japanese blinds push across the bridge. 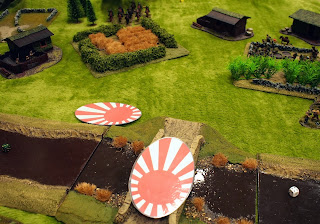 Russian Cossacks, freshly painted and on their first outing, charge into Japanese infantry stuck in the open. The Japanese rout, but the charge comes at a high cost for the Cossacks. 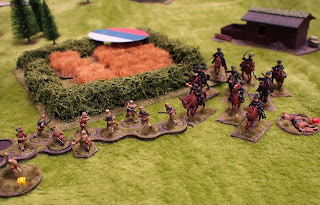 One last push to secure a bridgehead fails and with night closing, the Japanese withdraw 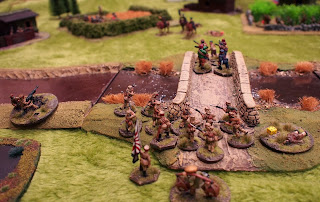 EDIT: And as if by magic, Stu more fulsome briefing and AAR is now up: http://dusttears.blogspot.co.uk/2013/11/russo-japanese-war-aar-3-forcing-river.html

Time for a Small Dose of Miscellany

Every so often, I post up a selection of oddments that has worked is way off my painting queue. Here is one such post, not that I'm clearing the desks before the challenge starts, no sireee.

When Gharak and I were debating what to game next weekend, we came up with a twist on Pulp Alley, setting it slightly earlier in the 1920 and adding a Cthulu mythos twist, to tell the ghastly tale of what happened to the Professor's wife in a quiet english village. So off I merrily went to identify minis in the lead pile for a new Pulp Alley league. This giant of a chap is the first and was to be the village blacksmith. He is from the Blackwater Gulch western range. Alas, we've now decided of push around some WWII using the new and popular Chain of Command rules from TFL, so I'm not likely to finish the rest of them until we find a slot return to this genre. 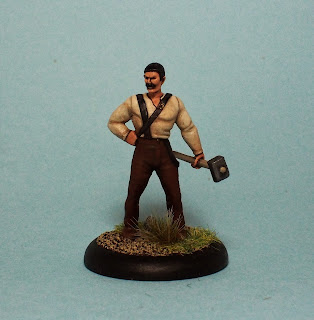 The ever-enjoyable Pulp Alley rules do rely on randomly generated 'plot points' as narrative devices and in-game objectives. So I used some odds and ends that I had around to throw together my first few: 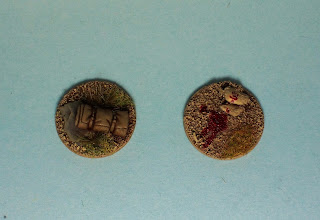 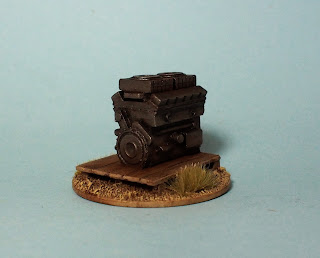 As we roll into winter in the UK, the nights have drawn in and I'm starting to find a little bit of hobby time to keep things ticking over. I've finally finished these Mahdist Baggara cavalry off, which have been cluttering up the painting table for a many months. 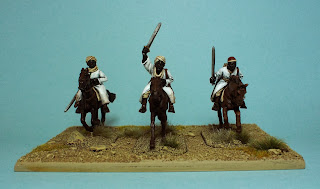 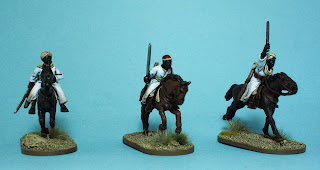 I found them a nightmare to photograph, these were the best of a bad bunch. They have such contrast between the very dark skin and white robes that I can barely get the skin to come out. However I tried to light them they were too dark or over-shiney, not helped by them not being Dullcote-d yet due to the wintry weather in the UK. But I am managing to get more depth of field. I'm pondering photography solutions (maybe even a lightbox!) and will probably have another go at photographing these some day. 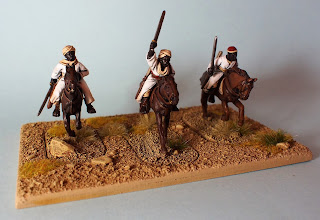 This is the second of the last three units completed to give the 'bare minimum' games of Black Powder that I've played to date. The third, Egyptian infantry, is on the table now, I'm hoping to get them finished over the next fortnight. That just leaves command stands, oh and the many other units that have accumulated in the lead pile! I'm hoping to stay focused and make a big dent in all of that during the Challenge, with the ultimate aim of putting on a game at Wyvern Wargamers in a few months. 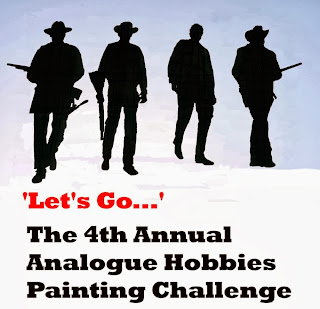 Unless you've been hiding under a rock this week, you'll probably have realised that the annual extravaganza, Curt's 'Analogue Hobbies Painting Challenge' is kicking off next month. I'm delighted to be taking part for the third time, as I find it a huge motivator to get things done, until the painting burn-out come March, of course! Like the other Challengers, the next few weeks will see me mulling over my points target, planning for the 'bonus rounds' and prepping as many minis as possible.
Posted by Phyllion at 22:58 12 comments:

A Quandary of Command

I'm new to Command stands, having gone with two fairly simple ones to start. so I'm looking to the wisdom of the blogosphere to help me with my latest composition. The second mounted British commander is quite a dynamic chappie waving his sword around - looks like he knows what he's doing so I imagine it is in the direction of the enemy.

But who would be a good fellow to accompany him? This businesslike bugler, a-bugling away? 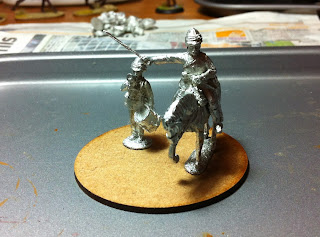 Or someone more relaxed, mopping his brow? 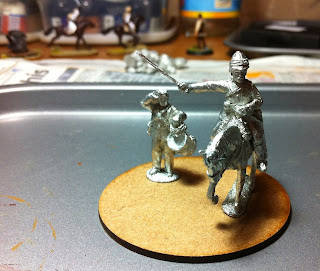 Or perhaps a Sergeant yelling out orders? 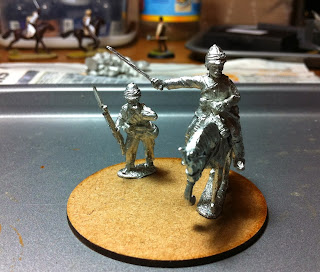 Or another? I've this command pack available:

NB. The sharp eye-d among you may spot the latest painting off the queue lurking in the backgound - anyone think they can identify them? They'll be posted up later in the week.
Posted by Phyllion at 20:23 22 comments:

Normal service will be resumed soon

Apologies for the lack of posts recently, hobby time has taken a back seat with my recent move, with plenty of unpacking and DIY to be done. A few weeks with no painting at all and I'm only just getting a little time for it. The endless trips to B&Q, Ikea and many others will be with me for months, as will the DIY as my wife and I work our way around the house. As if I needed a new project!

On a slightly more hobby-related note, I recently caught a fascinating exhibition: 'Newseum' by the Times. It was a fairly small but interesting look at (UK-centric) journalism throughout the ages, touching on the Crimea, colonial conflicts, the discovery of Tutankhamun's tomb, conquering of Everest and onwards.

The highlight for me being two of the telegraphs sent by Frank Powers during the siege of Khartoum. Including this one, to be hand delivered after the telegraph line was cut. If you look carefully, you can see it was annotated with 'send this' and signed by General Gordon. Apparently, it didn't make it though the Mahdist blockade and was found years later, stuffed in the walls of a hut. It's significance was realised and it was eventually received by The Times in London in the 1890s. The Times archive must be full of such fascinating snippets from history. 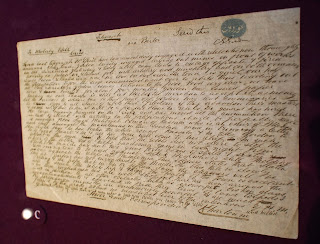 Unaware of the no photography policy, I caught just the one snap before I was politely but firmly told to stop.

Frank Powers himself was killed in September 1884 alongside Gordon's assistant Colonel Stewart when a group tried to break the blockade around Khartoum aboard the Steamer Abbas. The attempt failed when the Abbas ran aground and all passengers and crew were killed in an ambush.

Finally, I had the good fortune to visit Wyvern Wargamers the other week and managed to get a game of Chain of Command in 15mm. Stu, Paul and the rest made me feel very welcome and I definitely intend to visit as often as I am able.