A Salute preorder with Flag Dude means I can finally finish each of my Napoleonic units with their Colours. Here are the first few - the Spanish infantry. 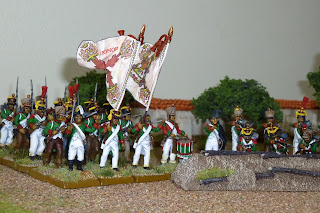 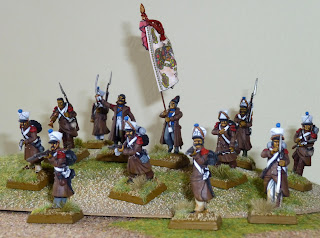 When I started the project I hadn't thought about how to do Colours, so merrily got on with painting. I settled on Flag Dude after seeing them at Salute a couple of years ago. But that meant a bit of work to cut off the poles and drill out the hands. While my modelling skills are up to it, I did mangle to paint jobs a bit and snapped arms off to make life easier drilling, so once re-assembled I had to spend a couple of hours tidying the paint jobs up. My fault for poor planning! I also re-painted the finials to match how I paint red and bronze, which was out of preference rather than necessity. The British which I've still to do should be much easier as the Perry plastics' hands won't need drilling out.

So what are Flag Dude's banners like? Well, I love the flapping effect he achieves and they are surprisingly durable. I'd really like to know how he does it. He was happy to research and make up some custom designs for me, which was great customer service with just a few weeks notice before Salute. The flags come complete with painted finials and poles which was a big draw for me. They are priced at £4 each, I didn't think that was bad. You can get much cheaper sheets but you're paying for ease of use and durability here. They are large and poles are very strong, being made from steel wire rather than brass. Which I think is great as I've broken quite a few of the plastic ones. The steel poles are a tad thin visually, but being steel are already hard enough to cut to length (I had to buy better clippers to do it...). 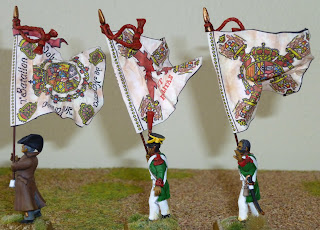 My only disappointment was the pixellation on the designs, which is noticeable on the diagonal lines especially, the close up above should demonstrate. They could do with higher definition images, but I admit I don't know how easy that is to do. But it is something I'd have expected as the price point seems to be at the premium end of the market. In fairness it is also only visible from close up and at tabletop distance they really do look fabulous. What do you think?
Posted by Phyllion at 15:19