Just back from a delightful, if chilly, weekend with the brother. Oddly, we hadn't scheduled any of our usual miniature games, mostly as I was on the train so transporting the necessaries was an issue.

Instead we busted out some board games. The first actually being a miniatures game: Angels 20. Dogfighting with pre-painted 1:150 planes. Its actually really good, a notch or two easier than Wings of War/Glory, but really fun and quick to play through. I liked the hex-based movement and the alternating turn order mean you had to predict where an opponent would end up to line up your shots. Although similar to many Pre-painted plastics, (the rules are almost identical to War at Sea), we agreed it is visually an tactical superior to all the others we've dabbled in. 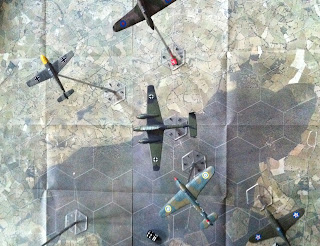 We got three games in a couple of hours. So I'd recommend it for something you can pick up and play or for less experienced gamers. Gharak has changed the flight stands to be telescopic, (read more in one of his rare blog posts), which looked ace and meant you could easily tell the altitude level of each plane. 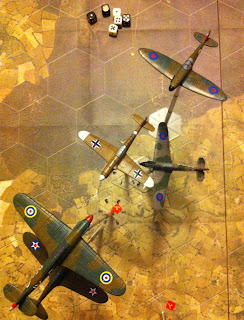 Next up was Caylus, a relatively complex Euro game. The theme was building a town and castle and competing for royal favour. It reminded me a lot of Agricola a it has similar man-placement and resource mechanisms. I found it less frustrating than Agricola, I think because you have 6 meeples rather than 2. But I think Agricola is perhaps a slightly better game, due to the challenge (and resulting satisfaction) and the choice of card decks perhaps making it more replayable. 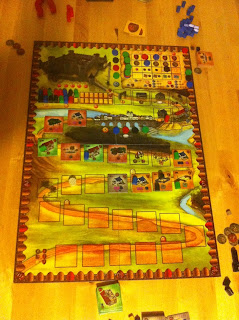 Looks complicated, but surprisingly easy to pick up.

Finally, a quick one from my collection: Braggart. A quick, humorous card game where you compete to make the most impressive boast of fantasy-world achievements. The art on the cards is good quality and the 'Liar' feature adds fun sabotage to turn great boasts into something quite bizarre and oft hilarious. 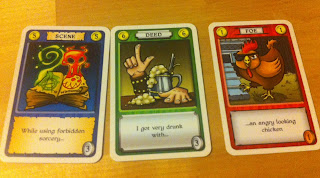 One of my...less impressive feats

Id recommend it fr something quick and fun, but as all of these things I think the replay value is limited. I think D&D players would enjoy it in particular, perfect to start and evening off (or write some quick back story!)

All in all a fun weekend's gaming. At Christmas we hope to resurrect an old
project: side-stepping our Pulp game to a couple of quick weird World War scenarios. The best bit is I've already got all the minis for that and most of them are painted!