Most secret intelligence provided the location of 'Facility 621', whose purpose was unknown beyond that it was purported to be managed by the Nazi 'Science Advancement Service'.

Dropped by glider, the mission of 17 Commando Troop was to secure and hold three known entrances to the facility, allowing troops of the 1st Assault Infantry Brigade to enter, exploit and destroy the facility. Intelligence and Aerial Reconnaissance suggested that Resistance would  be high. 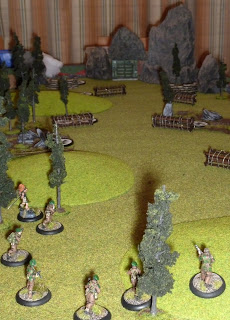 The assault began one hour after dusk and the squad split into two, to approach Entrance B through thickly wooded terrain either side of a dirt track. Initial fire was exchanged with regular Heer infantry, with initial casualties inflicted and incurred. Jacky-Boy caught a lucky shot and was killed, while the defenders brought up heavier weapons. That mad Scot Rossy surged forwards only to catch a panzerschreck blast. To our astonishment, he survived with barely a scratch - the giant has the luck of the devil, well or a very thick head! 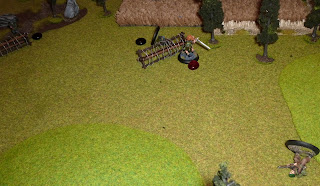 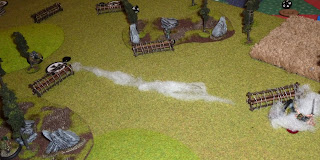 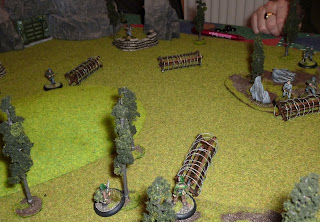 Hunkered down and exchanging fire

Progress was slow through the rough terrain and resistance mounted by the minute. Our misfortune was compounded by the untimely return of a dog patrol, which did for 'Stiffy' Simpkins. Casualties mounted and further progress in the face of such resistance looked increasingly unlikely.

Showing the utmost daring and bravery, Corporal Anderson scrambled over a steep incline, but we immediately came under fire and were unable to follow. We heard an exchange of fire with an unknown number of opponents, before Anderson's Sten went quiet. 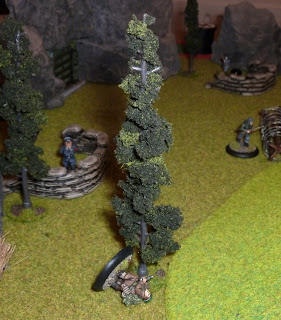 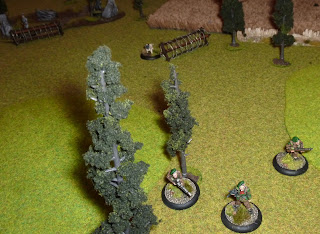 Signed,
The Major
Posted by Phyllion at 19:39