Samulus was over last week for our second game of Black Powder in the Sudan. It being a post-work game, I put together a simple relief scenario, with an Egyptian force holding out in a defensible village until a British relief force could arrive, see off the Mahdist hordes and evacuate them to a safer area. This time, I took the Mahdists and Samulus the Anglo-Egyptian forces.

Defending the village in one corner of the board, we have Egyptian infantry and some hastily turned out locals, encouraged to defend their property by the pro-Egyptian tribal council. Without support, surely they can't hold out long? The Mahdists would claim a minor victory for wiping out the garrison and major for breaking the British relief force. The British would claim a major victory if the garrison survived and they broke the Mahdist force. 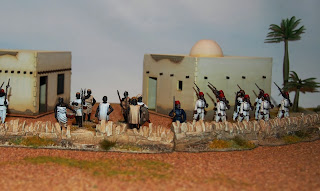 Facing them, the Mahdist hordes swarm over the ridge line, almost within striking distance. The Mahdist cavalry was raiding off-table and would arrive later.

Turn one and some uncharacteristically good command rolls had my Korfodan tribesmen flood forward, almost to the village outskirts and disrupting the pro-Egyptian warriors with a quick volley on the run. Samulus responds in the only viable way, scoring two hits and a disruption with some fine shooting. 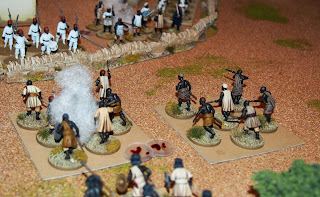 It all looks over for the Egyptians, until I roll the traditional blunder. But the situation is saved by a '6' - all ordered units charge the nearest enemies! The Mahdist infantry decimate the tribal militia on impact and press home their assault on both Egyptian units, breaking the leftmost one soon afterwards. But assaulting a defended position takes a toll on the first wave. 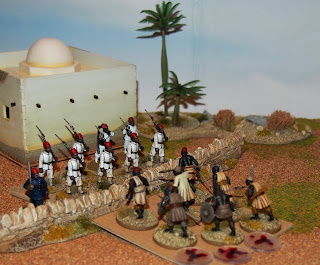 Turn two and the British arrive, all formed ranks and artillery

Could the outriders be the Egyptian's salvation?

The attack on the village has dragged in most of the Mahdists, leaving just stragglers facing the British firepower. While I was greatly helped by a timely (first) blunder disrupting Samulus' neat lines, it is well past time for me to re-form my lines. The British open up on the one Mahdist unit in range, Beja sharpshooters skulking in a wadi. As the smoke clears, the sharpshooters have vanished. Curses! 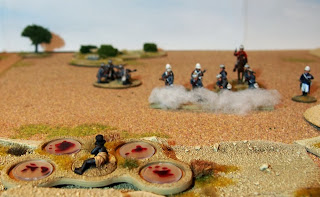 In my turn, the Egyptian infantry and Bashi Bazouk outriders break one of my infantry units. Bad timing for me as before I can pin them back into combat, the weary Egyptians seize the chance to make their escape. Cheekily, their mounted saviours charge well ahead, keen to put distance between themselves and the veritable horde on the heels on the Egyptian infantry. 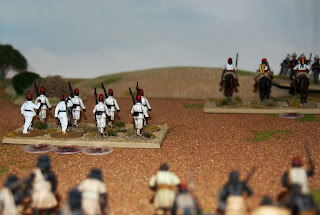 Seeing victory slip away, I gamble all on a last ditch charge. With my cavalry now on the table, they're flung forwards to join the elite Beja. But the fresh troops are too few in number and a disciplined volley as they close in causes too much havok. Both units are flung back. 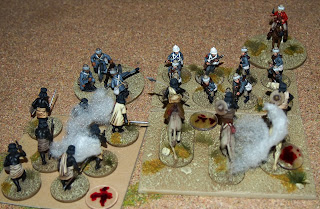 With the last desperate charge failing, I concede, the Mahdists fading away to find easier prey. The garrison survive by the skin of their teeth, so a major victory for the British! 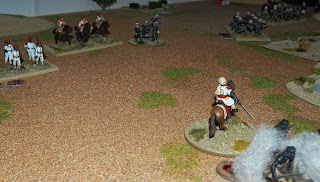 Another great fun game of Black Powder, it is such a playable system and ideal for evenings after work, wrapping up in under two hours. After a tough first game for the British, I tried to balance the forces, while playing another scenario which kept them moving. Moving one unit across and having the Mahdist cavalry delayed perhaps over-compensated, though the game was still quite close, with a minor Mahdist victory within reach until the surviving Egyptian infantry got a chance to make their escape. After that though, the last Mahdist charge was one of desperation, with too few full-strength units for them to make an impact on the fresh British line.

All of the photos were on my new camera, which I'm still getting to grips with. The lighting is better here, greatly helped by using the daylight lamp I use for painting. But I've been struggling to get enough depth of focus for good miniature shots - on many one rank would be in focus but the next out of focus. I understand a non-zoom 'prime' lens should improve matters, as well as playing with more of the manual settings.

The sharp eyed of you will notice that a few units are still only basecoated in each of the Sudan AARs. I'm slowly working through getting them finished, while assembling others with half an eye on the winter (and a certain painting challenge perhaps...?). The British screw gun has just come off the painting table, its varnish currently drying. Next up, some Baggara cavalry and more command. Relentless!