Last month, Gharak and I managed a few test games of the recently released Pulp ruleset 'Pulp Alley'. We both threw together leagues and raided Gharak's extensive terrain collection, with limited prep time. Rather than using the Professor and his chums (who are still mid-story, last played using .45 Adventure), I used my second league: the 'Societe Archaelogique'. Led by Jerome Lefranc, who previously served with the French Foreign Legion and is now an expedition leader for the Societe, with his Hungarian sidekick Andriy Shukhevych. They were joined by the beautiful, young and enthusiastic Veronique Dujardin and mooks Gerard and Joseph. Rounding out the group is Gustav, Andriy's diminutive but unexpectedly ferocious dog.

They were opposed by Butch Sullivan's League of Adventurers, featuring the brave, talented and ever ready Butch Sullivan, his partner in crime Lauren Stone and regular adventuring buddies, Kazim of the Umbaku tribe, Marcus, Akhmed the eagle-eyed and Indiana the dog.
Our first game took our two groups of adventurers to Egypt, to locate the lost treasure of Ahmet Ra. Butch Sullivan's League of Adventurers have had a tip off from an anonymous caller as to the whereabouts of an undiscovered and unplundered tomb entrance.

The major plot point for this scenario was the Colossal Tomb of Ahmet Ra, and the minor plot points were; Ceremonial Hieroglyphs, Disassembled Survey Equipment, The Jeweled Orb and Smuggled Explosives.
Writeup by Gharak (lightly edited by me, also available on his blog), photos by me.
Andriy and Joseph move up towards one of the the Orb, Akhmed lives up to his name and takes a shot at Joseph, wounding the Frenchman. Looks like he may be down for a while. 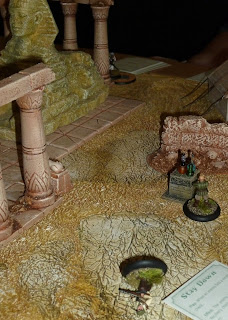 Moving up through a perilous area of old crumbling pillars, Lauren deftly dodges out of the way of some falling masonry and makes it through safely. 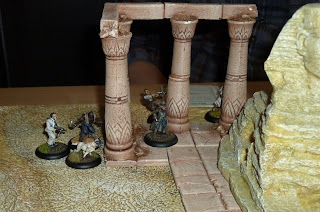 Andriy reaches out to grab there sacred Orb, a snake slithers out from among the trinkets and rears up to strike. In a show of reactions and strength, Andriy strangles the beast with his bare hands. Collecting the orb he stashes it safely and takes cover behind the plinth. 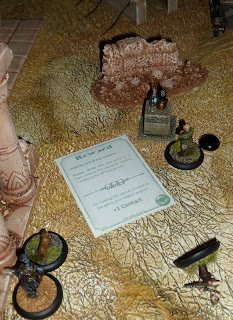 Butch make his move forward and stumbles on something buried beneath the sands, kicking the dirt aside he uncovered a discarded crate, the markings on the sides suggesting that the contents are explosive. Likely to come in useful, with a swift boot Butch smashes through the lid and retrieves several sticks of dynamite. Meanwhile, Lefranc aims round the crates he was taking cover behind and downs Kazim with a single shot as he makes his way around the sphinx. 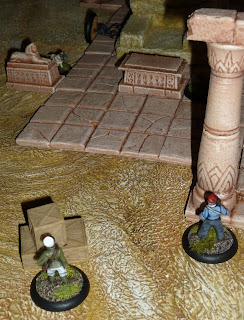 Veronique makes her way over to the crates and reassembles the surveying equipment and she soon moves away back to cover. 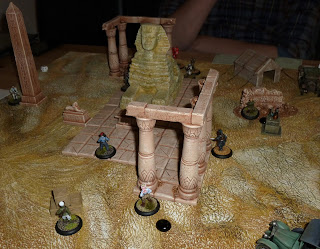 Gustav makes a brave attack on Indiana but the larger dog clearly has the advantage and comes off better. 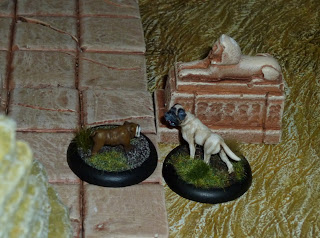 Lauren edges along the side of the Sphinx and taking aim she squeezes off a shot against Veronique, with an heart-sinking click Lauren realises that her pistols are out of ammo and the chance is wasted. Nearby an enraged Indiana rushes Gerard and the two engage in a deadly melee. 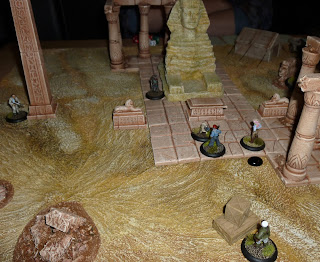 ReEloading, Lauren moves up to provide cover but Andriy quickly closes the gap and charges,  but the nimble adventuress deftly breaks away from his attack. 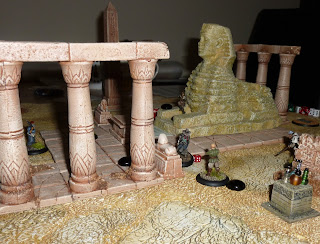 Butch seizes his chance and makes a dash for the tomb entrance, lighting the dynamite he steps out of the way and a mighty explosion destroys the seal and grants entry to the treasure inside. 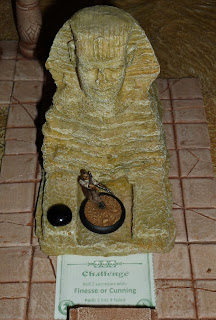 Butch and his team recover the lost treasure of Ibis from the tomb of Ahmet Ra.

I really enjoyed Pulp Alley. It is quite a simple ruleset, using the dice type and number of dice rolled to pass a test to differentiate between different characters. The standard role is to get multiple successes of a 4+ and the dice range from D6 to D10. Combat is done via 'dice-matching', giving one player the advantage of choosnig how to match them up. It has an asymetric turn order, with the initiative sitting with one player, who can choose which player activates a model next. Initiative is passed when wounds are incured or plot points succeeded, which reminded me a bit of a reverse 'turnover' in Blood Bowl, on success rather than failure.

Also, each player has a hand of cards (like 'Stay Down' in the first picture) which serve as both random events and extra challenges that you can play as 'perils' at certain points. Leaders and sidekicks are notably better than lower-grade characters, so you need to concentrate attacks on leaders to wear down their defences and do damage.

It is a better ruleset for two players than .45 Adventure and no need for an umpire. This meant both Gharak and I can run competing Leagues, saving Gharak from his usual role of 'playing the scenario'. The scenario generation is quite nifty, created by a series of rolls on tables to generate the 'plot points'. That serves as an outline from which Gharak and I work out the whys and wherefores. Some of the tables are a bit odd (covering more science and weird than the Indy Jones-type adventuring we do), but we were happy to re-roll a couple of results to get something more suitbale and could easily re-jig the tables themselves to suit our purposes.

Also worth mentioning the great presentation of the ruleset, it has an really neat 'Pulpy' style and is chock full of inspiring sketches. All in all, a really fun ruleset and most recommended. Its ease of play and focus on fun and great scenario generation means it will become our Pulp ruleset of choice.
Posted by Phyllion at 14:56