And now for something slightly different

After the loveliness, some grislyness. 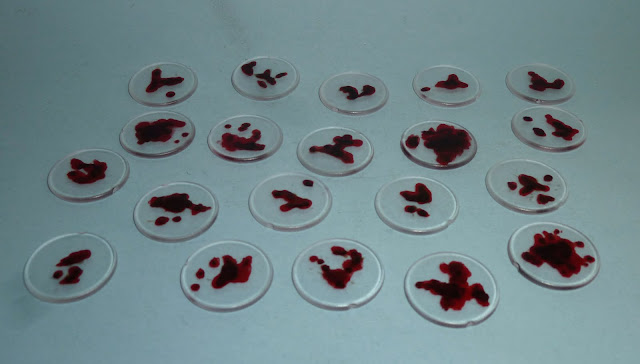 I previously used tiny dice to mark combat damage, which did the job but weren't very evocative so knocked up these wound markers, inspired by Anatoli and Curt's efforts. Simply 22mm round clear plastic counters from em4 with your choice of red blood. I tried out Tamiya clear red, which is very shiny, opaque and bright, but gives a good icky colour if you add some chestnut or black ink. I mixed up a few different colours in layers.

After initial tries, I realised that both less is more and more is more: they look much better with less coverage on the counter, but to get the best effect I blobbed the paint on thickly, rather than brushing it carefully - the bristles left streaks due to the thickness of the paint.

They are quite shiny, but that doesn't seem to have come out in the photo.

On an entirely unrelated note, Ian at The Blog With No Name is having a series of giveaways at the moment, well worth swinging by.
Posted by Phyllion at 08:47