For a long while, I was dissatisfied with my hobby photography setup. It was awkward to use, and I couldn't seem to apply enough light to my painted minis, despite lugging my painting lamp up to he loft each time I wanted to take some snaps of my latest work.

The lightbox offerings on places like Amazon were uninspiring each time I browsed, looking cheap and flimsy. But the Foldio2 Kickstarter piqued my interest. A simple, nicely designed collapsible light box with LED lighting, a second kickstarter was being run for a refreshed, larger design. Not particularly cheap by any means, at $65 plus shipping but I'd read good things about the first product and Kickstarter campaign.

And once again, OrangeMonkie delivered, pretty much on schedule. In a sleek box, that happily avoided customs charges, my light box, a choice of backgrounds and storage bag. 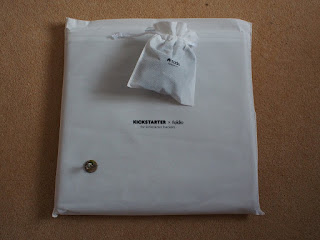 Opening it up, it's made in light but durable white plastic sheeting, and held together with quite strong magnets. These magnets hold it together when packed, and hold its shape when constructed. 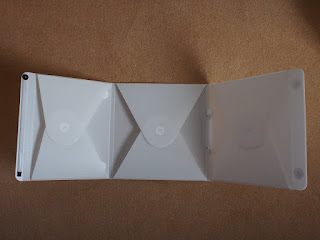 It's a doddle to build up, just fold out and form an open-sided cube with the recessed magnets. There's a flap to stick one LED light strip at the top, and more magnets to hold your backdrop of choice in place. The backdrops are a nice matt felted paper. 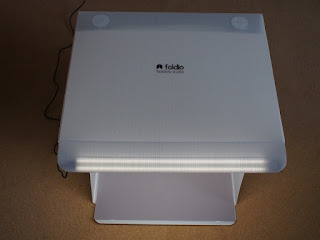 The Foldio2 is a decent size to photograph even the largest miniatures - at 15" square, I think it'll take squads, vehicles or monsters easily. With a 28mm miniature for scale: 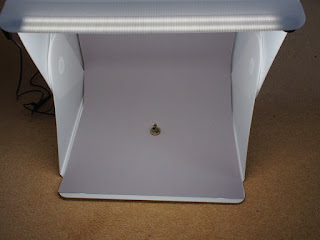 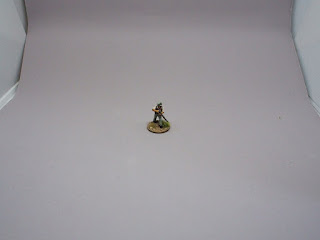 This shot was taken with just one LED strip, and the set came with two. And of course you can add further lighting if that's not enough. The LEDs are really bright and come with a dimmer switch built in. Both attach to a transformer with a choice of plugs, so should be usable worldwide. Each also had a light diffuser, meaning the Foldio2 claimed many improvements in the LED setup from the first Foldio. 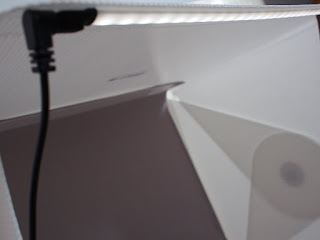 One LED strip stuck in place on the top flap - you can see how the three side-panels overlap and are glued by the magnets.

I've been using Foldio2 for a few months now and am really satisfied (look back and note the switch from my usual blue to grey background from July). I've found I can get more light, more evenly on the miniatures and am less reliant on pointing bulky lamps at small miniatures to get a decent shot, all the while struggling to reach the camera. It folds up and down easily for storage if needed. Simply, it does exactly the job I was looking for it to do. And it is durable and nicely designed. I've not tried OrangeMonkie's own photo-editing app to go with it, sticking with the reliable Snapseed for now.

I do have a few niggles with it. First, the magnets are held in recesses with white stickers, and a couple of mine have popped out. And of course, once a sticker has come off, it's never as strong. So sometimes when packing up/down, there's a game of 'find the misplaced magnet' to put back in its recess.  Second, the set comes with two LED strips, which is great (there was a four LED option too). But there's only one logical place to stick the LED strips and it seems wasteful to have them both on that flap. I've found that holding the second just above the camera's lens gets a great even light, though is a bit awkward. There is a bottom flap but I think having it that low it sheds too much light on the shadowed portion of the miniature and washes them out too much. I'm worried that the LED strip isn't durable enough for me to keep manhandling in this way. Thirdly, I'd have really appreciated a pale blue backdrop to be included - that's my colour of choice. The set came with black, white, green and grey. You could use any paper-thin background of the right size, but the ones provided are a nice photo-friendly paper. At some point I fancy making/buying a terrain backdrop to fit it and blue would have been great for that too.

I'd heartily recommend it as a solid option if you're looking to improve your hobby photos. The Korea-based company OrangeMonkie have created a good, well thought out product and fulfilled two Kickstarters on a large scale, on time - very impressive! But it does cost a good few pennies so is definitely a hobby luxury, for those of you trying to get the best photos of your work that you can. With the Kickstarter long over, it's  available at OrangeMonkie's website.

And, for reference, his was my old homemade backdrop, made from  cardboard box and some sheets of card as backdrop: 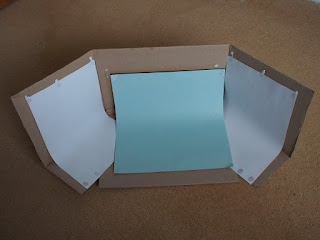 A significant improvement, all in all! I'd be interested to see other people's solutions.