Belatedly, my third Challenge entry, still rambling around the Pulpy era. I am completely off the pace in the challenge and struggling to build up momentum in my hobby time - these should have been a quick two-night job but took me over a week. First, a handful of Indian infantry, this is what I was going for (I'm sure someone can name the film!): 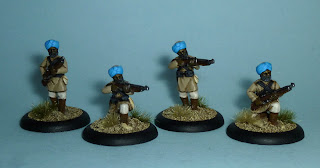 They are Newline Designs sculpts, picked up in a recent sale. This was my first order from them and I was disappointed, more so because I ordered the wrong sculpts - Hindu infantry would have been better. The poses are a bit wooden, the details soft and the casting poor, with lots of filing and filling necessary to rectify some quite bad pitting. I won't deny that I am spoiled by usually buying excellent Perry and Artizan sculpts. Still, they were reasonably priced and will suffice to save our heroes from peril. I wasn't concerned about historical accuracy here, this is very much a film homage, which is one of the joys of Pulp. As with all of my entries, they haven't been varnished yet, so some bits may be a bit shiny. 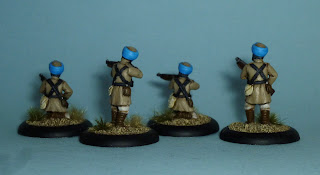 Next up, another antagonist to spoil our heroes' plans in a future adventure. A Russian or Eastern European hard man for hire, a fabulously menacing sculpt, but perhaps not an original paint job! 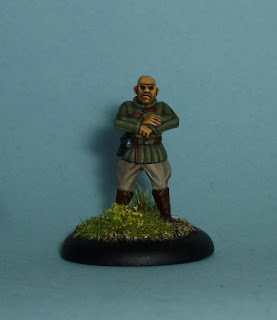 Finally, what was going to be an attempt at retaining the 'Sarah's Choice' award. Alas, the rules are slightly different this year so this blonde warrior-woman probably won't qualify. She is a fabulous 'Hour of Glory' character,  I still have an alternate sculpt still to paint another day. I see her as an SOE agent, inspired by a small but moving memorial to them I accidentally found a while back in central London. Her uniform isn't ideal for behind enemy lines work, but it kept her colour-themed with my Commandos. 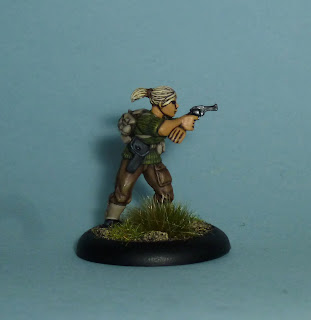 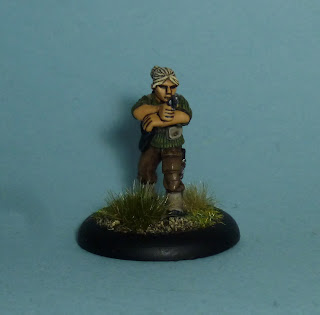 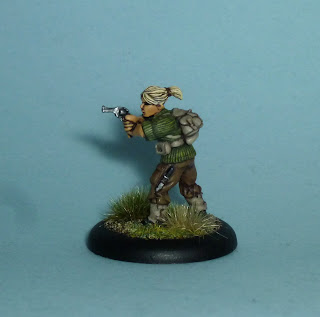 Next to show you? I've a batch of Greatcoated Germans which are pretty much ready to send to Curt. I started them with some new Rosemary & Co brushes, as recommended by Ian at The Blog with No Name. I won't review them yet as I'm still making my mind up, but they were very reasonably priced and have held up pretty well so far.