Last weekend I have the opportunity and pleasure to put on the first game of what will hopefully be short Sudan campaign at Wyvern Wargamers. Dane took command of the Mahdists against two British commanders in a small engagement of scouting forces. The initial briefing was:


Spring 1884: Egyptian-ruled Sudan is in turmoil. El Mahdi has emerged and gathered his 'Ansar' around him: the tribes Korfodan, Beja and Arabs. Egypt maintains isolated garrisons across the Sudan, but two European-officered field forces have been destroyed by the rebels, at Kashgil November 1883 and most recently, El Teb on 4 February. Britain rushes to support its protectorate and secure Suakin, a port on the Red Sea to secure shipping to the far reaches of the Empire.
One cavalry and two infantry brigades are hastily landed at Suakin, commanded by Major-General Sir Gerald Graham. As they are assembled, Graham orders a small force to reconnoitre towards the town of Hashin in the west, to ensure the security of Suakin and sufficient water supplies. The bulk rest of the British force assembles to face Osman Digna's main body, still believed to be to the south west.


Colonel Ashburnham leads four companies of infantry, plus scouts and support elements. As no large bodies of Mahdists are expected so close to Suakin, engage any Mahdist scouts at your discretion.

With no Mahdists immediately in sight, the British commanders advanced cautiously, sending out cavalry scouts to identify and draw out any Mahdists. Looping ahead of the main force, the British Hussar troop round an escarpment and loop back towards the infantry square. 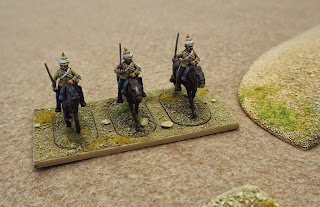 The British square advances steadily, with the Royal Marine Light Infantry on the leading face. The scouts fail to identify any Mahdists forces, with the irregular horse heading off on a wild goose chase on the British right flank. 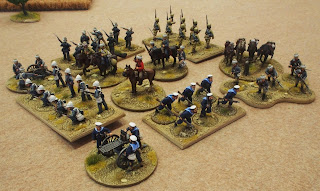 Before the British cavalry make it back to the square, the Mahdists spring a trap - charging at full pelt to engage the exposed Hussars*. The British wheel about to receive the charge and a swirling melee ensues with no clear winner. 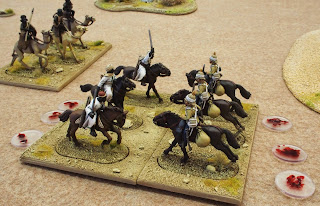 As the cavalry break apart, the Beja camelry engage, routing the beleaguered Hussars: the shame of Her Majesty's cavalry! The British mounted infantry take a sporadic fire from nearby shrub and mill in confusion, re-mounting and surging to front of the square.** 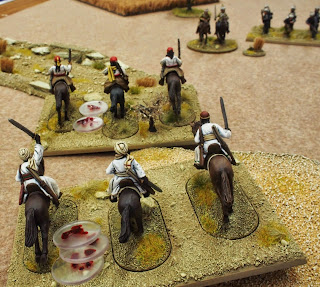 As the cavalry engagement peters out, the square opens up on the remaining Mahdist cavalry. Under a hail of rounds, they are similarly routed from the field. Meanwhile, the Mahdist infantry emerge, throwing up great clouds of dust as they surge towards the British square.

Realising the need to bring firepower to bear, the British form a line with speed and precision. The guns sit centrally, the line anchored by the Bombay infantry and KRRC.

The British open up on the horde of Beja, who stall under the steady fire**. 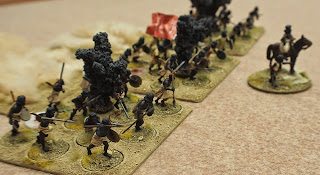 The scrub is finally cleared of Beja skirmishers by bayonets of the brave lads from Bombay.
As the Emirs of the Arab infantry wing finally rouse their troops for battle,**** the Beja surge forwards into the a British fire once again. Slowed by the rough ground of the dry riverbed, the charge falters without contact.

The British line prepares to fire once again. With the day slipping towards evening and many brave warriors strewn across the field, the Mahdist force melts away to fight again another day. The British scouting force claims a minor victory, having repelled the Mahdist scouting force without significant loss. But they did not have it all their own way, they didn't reach the ridge to scout Hashin, the British were cavalry battered and shamed and the square didn't receive and repel anything like a full charge. They turn back for the short march to Suakin before night falls. 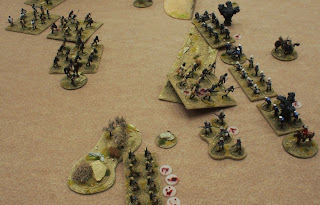 *I allowed a rather ambitious attempt to spring a trap and charge from off-table, for which Dane rather fortunately rolled a triple move to make it in one turn with the Baggara horse. The poor Hussars, charged from the rear, could only wheel to face.
**Second British blunder.
***All three units disrupted - most unfortunate for the Beja as the charge falters!
****The second Mahdist infantry wing twice failed its command roll to advance on the square. Third time lucky they got moving, but too late to threaten the square wig a coordinated charge. Having said that, the Mahdists had the better command rolls for most of the game, with the British blundering three times throughout the game!

All in all, quite a close and tense game - the British definitely didn't have it all their own way and for a while it looked like they might actually struggle. Black powder gives a satisfying game in 3 hours or so, and is easy to both pick up and run. A nudge more period flavour needed perhaps - the random events table ended up only being used once.

I think it works well to present the British commanders with the challenge of a bare field so they don't quite know what to expect. A British defensive game should be good too, 'recycling' the Mahdist units to wear the square down and target it's weak points.

I was keen to confirm the stats of each unit were suitable, I'd modes away from those in the Black Powder rules and upped the British firepower to 5 but also the stamina of most units. This made the Mahdists harder to drive off in one turn, but easier disrupt with a '6' from the 5 firepower dice. I think I'll add a limited ability to 'shrug off' disruption using a 'Follow me' order, to allow the Mahdists an unexpected way of delivering a charge to the British line - even once they get it it should be a close fight 1-on-1 so I'm not concerned about it unbalancing things.

The Beja skirmishers were overpowered, intended to be more of an irritant. They need to lose a point of stamina and I think I'll deduct the benefits of skirmishing to it harder for them to hit and make them easier for the Brits to hit with shooting.

While I've put on a couple of games with Sam last summer, this is they first with everything on the field painted and all the movement trays finished. Looking good! This isn't quite the whole collection, but from here I can just add bits and pieces to bolster each force and change the compositions.

Thanks to the players for an enjoyable evening and to Paul for the loan of a desert mat - just the right colour it turns out.
Posted by Phyllion at 11:16