Still around, some aimless progress

You may have noticed a dearth of posts here. This is mostly because I've been pretty busy with real life for the past 6 weeks or so I've not really put a paintbrush to miniature. At least I feels that way, for some reason I've just not been feeling it recently.

I exaggerate slightly, I have done a few bits in a vaguely aimless way. When I'm daunted or disinterested by bigger projects, I fall back on the old faithful: Pulp. the project of endless possibilities, of great figures for no particular reason.

First up is a new NPC: 'Mustafa'. An Arab trader with goods for sale at the right price - some haggling required! Perhaps he also trades information, rumours and gossip. But will he help or hinder our heroes? 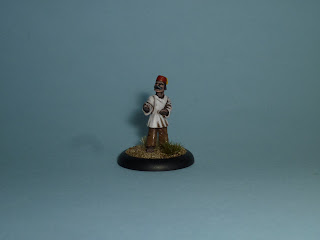 The miniature is from Black Cat. I don't think his tunic came out too well but as a minor character he'll do.

Next up, the party leader for an antagonistic adventuring association: 'Monsieur Leclerc' of the Societe Archaeologique. 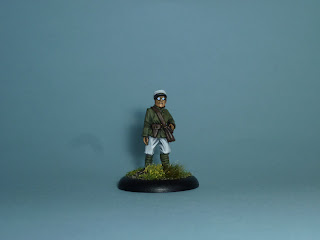 I'm really pleased with the paint job on him. I started looking up French Foreign Legion uniforms, realised they seemed pretty varied in the early 20th century so went with a nonspecific military uniform. He was a pleasure to paint too, as always with Artizan Designs 'Thrilling Tales' range. The only thing I'm not sure about is his glasses lenses - what do you think? 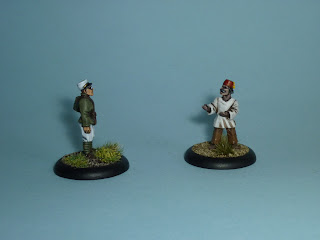 Mustafa tempts Leclerc with an offer of information

Both of these still need varnishing, after much browsing of forums I settled on a new regime using brush-on Windsor and Newton matt varnish then Testors Dullcote. Despite the 'matt' being more satin, meaning it sometimes needing two coats of Dullcote, I was sick of touching up chipped minis. I may even go back and varnish/dullcote some older minis for the extra protection.


I also finished these: 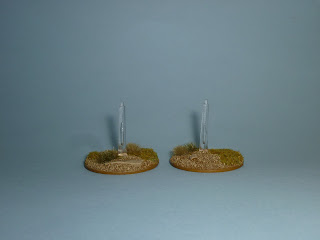 Yup, that's two bases, which one day will have Harpies on for Aegeus. The harpies themselves are half assembled. As I say, I've been a bit aimless!