Pulp Adventures AAR: Where in the World.. Part Two!

Ive not had chance to post the second Pulp game my brother and I played back in April. I hope you've been looking forward to how it ends.

As we left it, Professor Hemmingway and stalwart companion Mr Singh have survived their crashed plane, collected what equipment they could and escaped both unhappy locals and a vicious sandstorm. Unfortunately, their third companion and pilot had to be left behind!

As it turns out, what appeared to be an uninteresting crevice opens out into a hidden cave system. Ever curious, our heroes head out to explore, after pausing to lick their wounds and take some tea of course. Here they are at the top, while shadowy figures patrol a large cavern below. 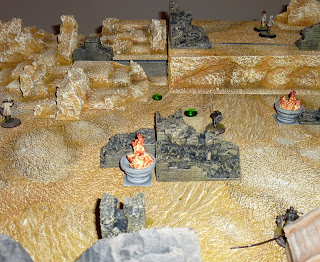 As they work their way down the rocky paths, they discover some small, hardy-looking ponies (yes, ponies. Though they might look like dogs, they are ponies, honest). These might come in useful. Our heroes take no chances and open fire on the locals. But the numbers of enemies could well take their toll. 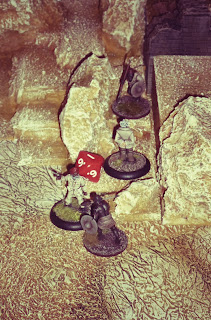 Locals close in, as the camerawork takes turns all vintage.

As our heroes fight off the angry locals, bad luck heaps upon bad luck, with a very peeved-looking tribal heavy emerging from his tent (perhaps the shooting woke him up), backed up by two bodyguards. Singh takes aim and fires, emptying his pistol. The heavy hesitates, buying our heroes a few seconds, but then recovers from a full panic. Damnation! The Professor makes a dash for the ponies, hoping Singh is close behind. 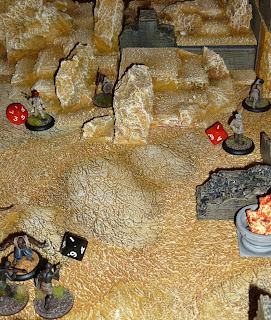 Urging his mighty(?) steed on, the Prof flees towards the entrance. Meanwhile, Singh falls under the weight of the tribal horde. This appears to be a theme for Singh. These most recent travels have not started well. 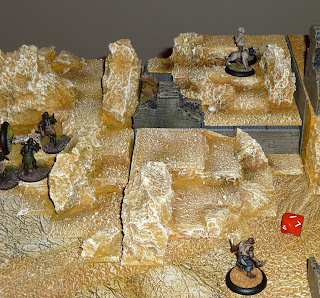 A few lessons from this game. The heroes were well underpowered, coming into the second scenario two men down. Also, the Prof isn't much of a combat character, being about as much use as a chocolate teapot when the firing starts in earnest. I the we'll have to tweak the satlines and write in some more mid-level combat characters. We're finding that Level 3 combat heroes are too powerful, but Level 2 non-combat characters are a bit weak (we use the .45 Adventure second edition rules, including character design).

It should also be noted that we had a poor draw of encounter cards, with what I'm told was all three antagonist cards coming out in the first four draws. Though we use a pre-set encounter deck, perhaps we need to tweak things on the fly if this happens again. And the final lesson - My brother needs to mention that he's written horses into the encounters - I've had to dig some spares out to add to the painting pile.

I mentioned an ending, but unfortunately, that's as far as we've got. Things are looking decidedly bad for our heroes at the moment, an escape will have to be planned before the next instalment in June sometime. If we survive this we might one day make it to India!
Phyllion at 22:09
Share